The 26-year-old rapper breaks down why the 77-year-old politician won her over. 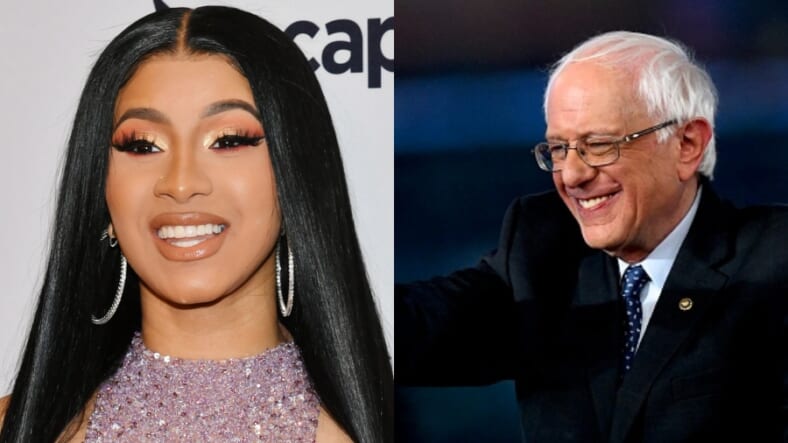 Cradi B and Bernie Sanders make for a strange pairing, but the “Press” rapper is standing by her candidate. (Getty Images)

Did Cardi B just make a Democratic presidential candidate endorsement?

The “Press” rapper tweeted out her thoughts Tuesday afternoon about two-time presidential contender Sen. Bernie Sanders (D-VT) and expressed how she believes American voters got it all wrong in 2016.

“I been reading about Bernie Sanders and I’m really sad how we let him down in 2016,” Cardi said to her 6.39 million Twitter followers.

“This man been fighting for equal rights, HUMAN rights for such along time. Seeing this country become a better place been really his passion for a long time not a new front for a campaign.”

I been reading about Bernie Sanders and I’m really sad how we let him down in 2016 This man been fighting for equal rights,HUMAN rights for such along time.Seeing this country become a better place been really his passion for a long time not a new front for a campaign.

Sanders’ loss to Hillary Clinton in the Democratic primary in 2016 was a sore spot during the last election. His supporters insisted the election was rigged in favor of Clinton.

Sanders involvement in civil rights goes back to his early days when he participated in the March on Washington in 1963 as well as the CORE Freedom Rides after he attended Brooklyn College in the 1960s. He has been a long-time advocate of equality and fairness.

In a 2016 “Politics Nation” interview with the Rev. Al Sharpton on MSNBC, Sanders reflected on his record:

“I worked against segregated housing at the school that I went to at the University of Chicago, marched with Martin Luther King Jr. It’s not only that I strong record on civil rights, the economic positions that we are advocating mean more to the African-American community, to the Hispanic community than they do to the white community.”

He made further headlines after Black Lives Matter activists took over the podium during one of his campaign stops. Some critics have accused him of not addressing issues of racial justice as much as economic justice.

However, if you ask Cardi B, that’s never been an issue.  She has showed her support for him before, saying in an interview with Variety, “Imma always go with Bernie…Bernie don’t say things to be cool. Like, there’s pictures of him being an activist from a very, very, very long time.”

After Bardi’s tweet today, Sen. Sanders was quick to reply to her glowing rundown of his record, tweeting back:

“Thank you @iamcardib! Our fight for justice is far from over and we are not giving up.”

Thank you @iamcardib! Our fight for justice is far from over and we are not giving up. https://t.co/zxXdhj412P