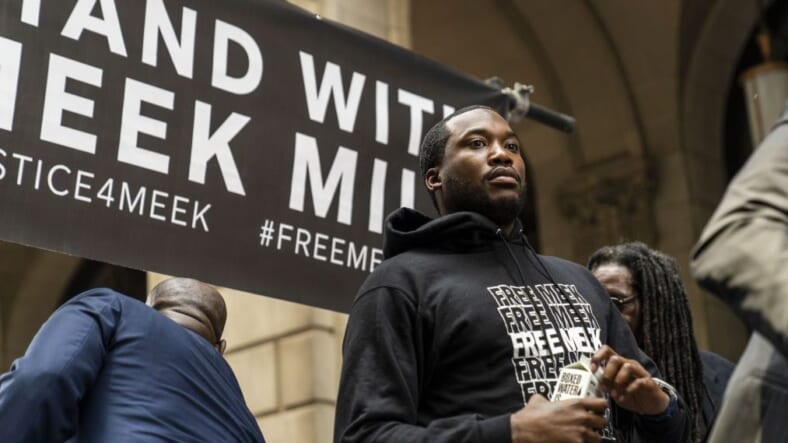 Rapper Meek Mill participates in a rally before he returns to court for a post-conviction appeal on June 18, 2018 in Philadelphia, Pennsylvania. Organizers of the “Stand With Meek Mill” rally are calling for the judge to grant the rapper a new trial over a 2007 drug and guns case., which his lawyers have repeatedly asked for and which the District Attorney’s Office does not oppose. (Photo by Jessica Kourkounis/Getty Images)

Lawyers for Meek Mill asked an appeals court Tuesday to overturn a 2008 drug and gun conviction that has kept the rapper on probation for a decade and made him a celebrity crusader for criminal justice reform.

Defense lawyers believe the city judge who has overseen his case and sent him to prison in 2017 over minor parole violation has become too involved in the performer’s life — once checking on his community service efforts at a homeless shelter — and lost her impartiality.

And, they say, the only prosecution witness at the nonjury trial was a drug squad officer whose credibility is now in doubt.

“He now has been discredited,” lawyer Kim Watterson of Los Angeles told the three-judge panel. “They (prosecutors) do not have confidence in his testimony and will not call him at retrial.”

The retired officer, Reginald Graham, is on an internal do-not-call list of police officers District Attorney Larry Krasner won’t use in court because of credibility concerns, according to a brief Krasner’s office filed that supports the new trial bid. Krasner, a former civil rights lawyer, took office last year.

“Although he was not charged federally with the other officers in the narcotics unit, Graham resigned from the police department prior to being formally dismissed,” Krasner’s office wrote, referring to a 2015 police corruption trial that ended with the acquittal of six officers. “The Commonwealth cannot call a witness whose credibility it mistrusts.”

Assistant District Attorney Paul George echoed the point in court, making for an unusual, uncontested appeal. He said the office wouldn’t call Graham due it its “legal, ethical and constitutional obligations.”

Prosecutors could choose to drop the case if a new trial is granted, leaving Williams unconvicted and free of the court’s oversight.

Mill, whose real name is Robert Rihmeek Williams, became a champion for criminal justice reform after Judge Genece Brinkley sentenced him in 2017 to two to four years in prison for the parole violations. He spent five months in prison before a court ordered him released last year.

He has hired a large team of high-priced litigators to clear his name, including lawyers from Los Angeles, New York and Philadelphia who were on hand for Tuesday’s hearing. Brinkley, for her part, has hired her own high-profile city lawyer to defend her actions.

“She’s a tough judge across the board,” said her lawyer, A. Charles Peruto Jr. “When you have this kind of money and fame you use it to your advantage to try to show she’s prejudiced against him. . If he wins, it just demonstrates that he’s above the law.”

At the 2008 trial, Graham testified that the 19-year-old Williams pointed a gun at him during the arrest outside his southwest Philadelphia home. Williams has acknowledged having a gun but denied pointing it at police. Brinkley found him guilty of drug and gun charges and sentenced him to about one to two years in jail, followed by 10 years of probation.

Williams, now 32, has frequently tangled with the judge over terms of the parole, especially over reporting requirements and travel rules that he says conflict with his soaring music career.

Brinkley, after a 2015 hearing that included testimony from Williams’ then-girlfriend, superstar Nicki Minaj, said she “has done nothing but try to help the defendant.”

“Pretty much everything falls apart if we grant (post-conviction) relief on the first trial,” Panella said.

Williams, whose top-selling albums include the 2015 “Dreams Worth More Than Money” and last year’s “Championships,” is a fixture at NBA games in Philadelphia and has the support of many high-profile celebrities and athletes.

He appeared in last month’s season finale of “Saturday Night Live,” performing beside DJ Khaled, John Legend, SZA and other artists in a tribute to slain rapper Nipsey Hussle.
A documentary on his legal travails, produced by music mogul Jay-Z, is set to be released next month.