Although the television audience heard protesters interrupting Sen. Cory Booker, the chants were directed at the mayor, over the NYPD cop who was accused of choking a man to death 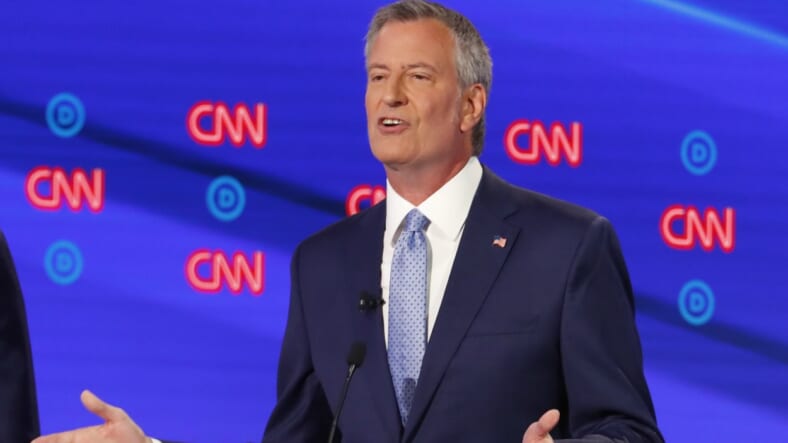 The chants have played out since July 16 when the Justice Department decided not to prosecute NYPD officer Daniel Pantaleo for the 2014 choke-hold death of Eric Garner, according to the New York Daily News. Pantaleo has been on paid modified duty for five years since Garner’s death on Staten Island. A grand jury also refused to indict him in the incident.

“When Bill de Blasio was making his opening statements, we collectively, those who came, decided to make a statement of our own,” Foy told the newspaper. “We said it. We said it. We said it three times. That was the end of our protest.” By the time de Blasio had ended his opening statement, Sen. Cory Booker had begun his and television audiences heard their protests during the live broadcast on CNN, which briefly interrupted Booker.

Police escorted Foy from the debate and in an act of solidarity, the remaining four protesters told police that if Foy left, they were going as well.

Foy said de Blasio has failed the citizens of New York and that he continues to fail to hold members of the NYPD accountable for its wrongs.

Hundreds of protestors also gathered on the 5th anniversary of Garner’s death, also calling for Pantaleo’s firing – with the slain man’s daughter saying she will protest every day until the officer is fired.

“If he doesn’t get fired, we’re going to do this every day,” Emerald Snipes-Garner told roughly 300 protestors who marched from Foley Square to police headquarters in downtown Manhattan on July 17. “If we get no justice then there will be no peace. We don’t want any more investigations. We want him terminated,” Snipes-Garner said, according to The Daily News.

After Wednesday’s debate, de Blasio tweeted an acknowledgement to the protestors.

To the protestors in the audience today: I heard you. I saw you. I thank you.

This is what democracy looks like and no one said it was pretty. #DemDebate