BYRON ALLEN: Donald Trump’s Department of Justice and Comcast are Working Together to Destroy a Civil Rights Law in the U.S. Supreme Court

Today, August 20th, 2019 is the 400th Anniversary of Slavery in America but Unfortunately, Today We are Still Economic Slaves 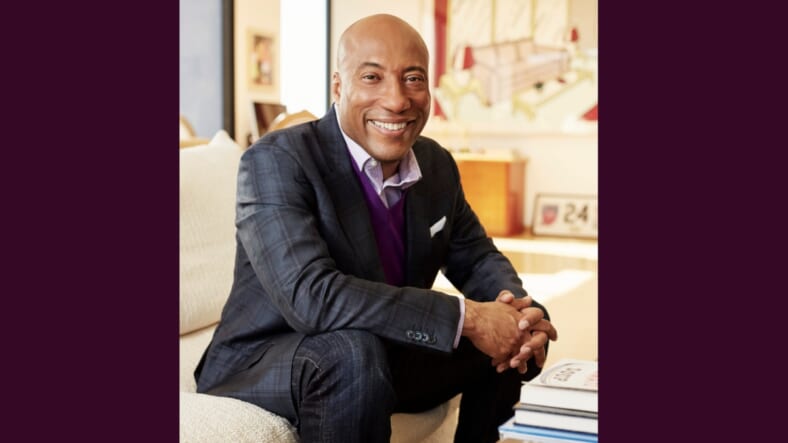 Byron Allen is the Founder/Chairman/CEO of Entertainment Studios, one of the largest privately-held media companies in the world, and happens to be African-American.

Comcast/NBCUniversal and the Trump Department of Justice are asking the U.S. Supreme Court to roll back civil rights. It started with a racial discrimination case I brought against Comcast. After losing twice in the Ninth Circuit Court of Appeals, Comcast went to the U.S. Supreme Court. And now they’ve brought the Trump Administration along to take their side in the highest court, putting at risk all Americans’ civil rights for their own financial gain.

Comcast/NBCUniversal, the largest cable operator and residential broadband provider in the U.S., enjoys the image of a progressive, diverse media company, holding itself out as an organization that stands up to discrimination and gives voice to progressive viewpoints and people of color. It’s the same company that brings Rachel Maddow, Chris Hayes, Joy Reid and Lester Holt into your living room every day and unsparingly covers Donald Trump’s racist Twitter rants. If all you did was watch Comcast’s MSNBC and NBC programming, you would never know that the company is quietly attacking civil rights in the U.S. Supreme Court right now, in an effort to deny us a fair shot at doing business with the company and in the process, gutting the Civil Rights Act of 1866 and its prohibition against racial discrimination in contracting.

But that’s what they’re doing. Perverting a key provision of the law that protects minority businesses at a time when people of color are under heightened attack. All for what Comcast says is in its best financial interest. While it is not unusual for a big corporation to defend itself in court, what makes this case different is the stark contrast between how Comcast presents itself to its viewers and subscribers on the one hand, and how it presents itself to the U.S. Supreme Court on the other. The very same company whose anchors, commentators, and correspondents report on and excoriate Donald Trump for his racist statements, is arguing to the U.S. Supreme Court that African Americans, Latinos, and every other racial minority should have a harder time winning relief under the Civil Rights Act. And now Comcast has teamed up with Donald Trump to keep African-Americans and other minorities from achieving economic inclusion and equality.

Comcast is the defendant in a lawsuit brought by my company, Entertainment Studios, which produces TV shows and owns TV networks for distribution on cable and satellite platforms, including channels in the comedy, entertainment, and news genres. Like all such companies, Entertainment Studios must sell its channels to the big Pay-TV distributors, like Comcast, who decide which channels to carry and under what terms. We allege that after multiple meetings with Comcast programming executives, and after demonstrating our channels’ competitive ratings, critical acclaim, and distribution by many of Comcast’s competitors (Verizon Fios, DIRECTV, AT&T/U-Verse, and DISH Network), Comcast declined to carry any Entertainment Studios channels and instead carried similarly-themed, lower quality channels that were not owned by minorities. We also allege that a Comcast executive explained the decision by saying “we don’t need any more Bob Johnsons” — a reference to the African- American billionaire founder of the cable network BET, suggesting that Comcast did not want to do a deal with my company because of my race. Based on this and other evidence that race was a motivating factor in Comcast’s decision not to carry my TV channels, my company sued under The Civil Rights Act of 1866, 42 U.S.C. § 1981, a federal statute that prohibits racial discrimination in contracting. The law was enacted to give the newly-freed slaves a pathway to economic inclusion. On June 10, 2019, petitioned by Comcast after it lost twice in the Ninth Circuit Court of Appeals, the U.S. Supreme Court agreed to hear the case on the question of what evidence a plaintiff must show to establish a claim under the Civil Rights Act of 1866.

Comcast, which makes billions of dollars annually from African-American subscribers, has taken the position that a plaintiff must show that racial discrimination was the only, 100 percent “but for” reason not to do business with African Americans. In other words, Comcast argues that an African American-owned business must show not only that the defendant considered race (which the statute forbids), but that the professed, hypothetical race-neutral reasons that could have motivated the defendant are false. In this case, that means that Entertainment Studios would have to prove that race was the only reason Comcast refused to do business with it, not simply a major reason. The impact, of course, is to make it much, much harder for me and other Americans, today and in the future, to secure economic inclusion.

The Ninth Circuit Court of Appeals completely rejected this argument. It ruled in my company’s favor, not once, but twice, stating that if a plaintiff shows that race was a “motivating factor” among many in a contracting decision, that is enough to state a claim under the Civil Rights Act of 1866. The Ninth Circuit Court of Appeals ruled wisely. There are many possible explanations for any business decision. It is very difficult to prove that race was the only factor in deciding against doing a deal. In other areas of discrimination law, courts have ruled that a plaintiff need only prove that race was a motivating factor, shifting the burden to the defendant to show that the same decision would have been made without regard to race. That is our position and it is consistent with the language and history of the Civil Rights Act of 1866.

Unfortunately, rather than accept the judgment of two rulings from the Ninth Circuit Court of Appeals, Comcast used its enormous wealth and power to challenge and put at risk a very important civil rights statute in the U.S. Supreme Court, endangering all Americans’ civil rights in the pursuit
of Comcast’s own financial gain. We should not be surprised. Comcast knows how to control lawmakers, regulators, politicians, and advocacy groups. They consistently rank among the top spenders on lobbying, along with defense contractors and other large industries. One civil rights leader told us that while he opposes Comcast’s manipulative legal actions “Comcast has us by the balls.” There it is. Civil rights organizations are afraid to speak out against Comcast, because Comcast gives them money, stopping them from doing what they were created to do – fight for and maintain our civil rights.

Now, Comcast even has persuaded Donald Trump to join them in taking a stand against civil rights in the U.S. Supreme Court. Comcast’s top executives supported Hillary Clinton for president. NBC and MSNBC criticize Donald Trump constantly. Trump delights in calling out Comcast and the rest of the “mainstream media.” But when it comes to rolling back civil rights, Comcast and Trump bury the hatchet and team up against us to make sure we are economically excluded forever.

Comcast’s current posture before the U.S. Supreme Court is consistent with its behavior over the last several years. Billionaire Michael Bloomberg had to sue Comcast for violating an FCC order requiring Comcast to compete lawfully and place the Bloomberg business news channel in the same lineup as Comcast’s own business channel, CNBC. As a broadband provider, Comcast has deployed technology to slow competitors’ video over the internet (just ask Netflix) and when caught by the FCC, rather than reform their behavior, Comcast sued the U.S. government.

Unfortunately, Comcast has chosen to use the U.S. Supreme Court to maximize its own profits, if Comcast thinks that we are wrong, it should go to trial and make its case. It should not challenge and put at risk all minorities’ ability to prove discrimination under the Civil Rights Act that has been in place for 153 years. Meanwhile, I hope that people of conscience will let the U.S. Supreme Court, Donald Trump’s DOJ, and Comcast know, enough is enough. Dr. Maya Angelou taught us if we give them one hair on our head, eventually we will wake up bald. Four hundred years after the start of slavery in America, every day, America kills African-Americans in the classroom by making sure we don’t get a proper education; in the boardroom by making sure we don’t have true economic inclusion; and in the courtroom with Jim Crow laws and massive incarceration, long before you watch us bleed to death in the streets. I hope that America takes this historic opportunity to make sure that we have equal rights for all and don’t allow Comcast — headed by CEO Brian Roberts — to manipulate civil rights laws in partnership with the Donald Trump Administration, which will hurt millions of Americans, for Comcast’s own financial gain.

Coretta Scott King, the widow of the great Rev. Dr. Martin Luther King, Jr., was a friend of mine and I’ll never forget what she told me. She said, “Byron, as African Americans in this country, we had four major challenges. Number one, end slavery. Number two, end Jim Crow. Number three, achieve civil rights. And number four, the real reason they killed my Martin, achieve economic inclusion.” I told Mrs. King, “you and Dr. King have done more than enough, and we will pursue the fourth and final chapter, and achieve economic inclusion.” She told me, “they will come after you, and there’s nothing they won’t do to stop you.” So, on November 13th, 2019, when I am standing in the U.S. Supreme Court defending our civil rights laws and protecting our pathway to economic inclusion, I will have in my heart Coretta Scott King, who told me that this moment would come. Although the U.S. government has told the U.S. Supreme Court to rule against us, we all know that it’s not fair. It’s not fair because we will be standing there with the truth — along with the wisdom, the guidance, and resilience of our spiritual ancestors. And fortunately for us, Comcast will only be standing there with just Donald Trump.