Retired NFL player frantically pleas for help from the league: ‘I have to get my head checked’

After seven seasons in the NFL, the former fullback is begging the league for help for what could be an affliction of CTE brought on by a career of gridiron hits 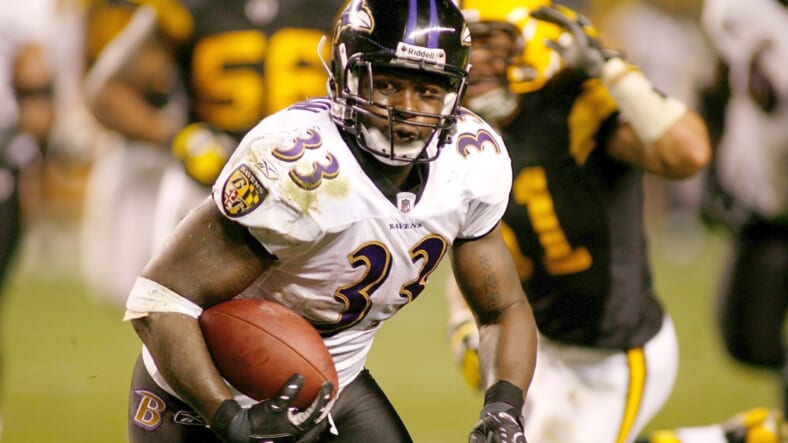 LeRon McLain, then with the Baltimore Ravens runs against the Pittsburgh Steelers in 2008. (Photo by Rick Stewart/Getty Images)

Over the seven seasons Le’Ron McClain was in the NFL, he suited up for the Baltimore Ravens, the Kansas City Chiefs and the San Diego Chargers. But he now says the hits he took while playing fullback for those teams led to brain issues and wants help from the league.

Taking to Twitter, McClain detailed what he called “dark times” stemming from what he says are traumatic head injuries.

I have to get my head checked. Playing fullback since high school. Its takes too f—–g much to do anything. My brain is f—–g tired…. @NFL i need some help with this s–t. Dark times and its showing. F—–g help me please!! They dont care I had to get lawyers man!

READ MORE: What is ‘CTE’ all about?

McClain last played in 2014 when he was released from the Chargers, who have since moved to Los Angeles. But now he tells a story similar to other retired players who were diagnosed with an ailment called chronic traumatic encephalopathy (CTE), a degenerative brain condition found in athletes, military veterans and others who have experienced repeated traumas to the head, according to the Mayo Clinic. In a Boston University study, 110 of 111 former NFL players had CTE.

“Need to tell my story of how my head is crazy and how football did it…. Please someone help me get this out the @NFL puts paperwork in out faces and thats it. Yes its programs f–k all that I need help now I need a plan”

Does the League Favor Quarterbacks?

PEOPLE points out in another tweet McClain signals to a potential bias for quarterbacks who need assistance as opposed to his position as fullback.

“Another sleepless night. Another day Another Opportunity tho. Staying positive Kings and Queens. Its hard no lie and im scared,” McClain wrote in a tweet days later. “Look at me talked all that on the field. I was A BEAST and now im a mess man in tears now but swear imma fight this peeps. Keeping this #AlphaMental”

Additional tweets from McClain detail his current mental state, along with requests for support and prayers.

In his tweets, McClain congratulated Indianapolis Colts quarterback Andrew Luck on a successful career after he announced his retirement at age 29. In a tearful press conference, Luck stated that he was burdened by the task of continuously attempting to comeback from injuries. “I pray you don’t have to go thru s–t on your mental like me now,” McClain stated.

In a press conference to support the use of CBD products, retired New England Patriots tight end Rob Gronkowski became emotional when explaining his decision to leave the NFL, also at age 29.

“I want to be clear to my fans. I needed to recover. I was not in a good place. Football was bringing me down, and I didn’t like it. I was losing that joy in life,” Gronkowski said.

The NFL has not responded to PEOPLE‘s request for comment.