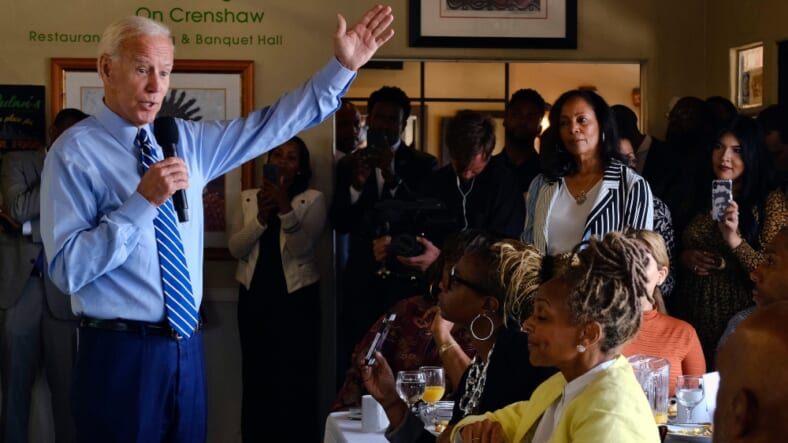 Democratic presidential candidate former Vice President Joe Biden speaks to community faith leaders after serving up breakfast during a visit to Dulan's soul food on Crenshaw, Thursday, July 18,2019 in Los Angeles. Biden spoke to black pastors and community leaders at Dulan's on Crenshaw sole food restaurant during a campaign tip to Los Angeles. He said Trump is ripping apart the country's social fabric and that Democrats must defeat him, regardless of whether Biden is the party's nominee or not. (AP Photo/Richard Vogel)

For all the strategic calculations, sophisticated voter targeting and relentless talk about electability in Iowa and New Hampshire, the Democratic presidential nomination will be determined by a decidedly different group: black voters.

African Americans will watch as mostly white voters in the first two contests express preferences and winnow the field — then they will almost certainly anoint the winner.

So far, that helps explain the front-running status of former Vice President Joe Biden. He has name recognition, a relationship with America’s first black president and a decadeslong Democratic resume. Black voters have long been at the foundation of his support — his home state of Delaware, where he served as a U.S. senator for nearly four decades, is 38 percent black — and until another presidential candidate proves that he or she can beat him, he is likely to maintain that support.

In the 2008 campaign, Hillary Clinton held a strong lead among black voters over Barack Obama until he stunned her by winning the Iowa caucuses and proved to black voters that he was acceptable to a broad spectrum of Democrats. Those same voters returned to Clinton in 2016.

This cycle, many black voters are also making a pragmatic choice — driven as much or more by who can defeat President Donald Trump as the issues they care about — and sitting back to see which candidate white voters are comfortable with before deciding whom they will back.

At the same time, the early courtship of black voters, overt and subtle, is part of a primary within the primary that includes detailed plans on issues like criminal justice reform, reparations, maternal mortality among black women, voter suppression and systemic racism.

“As black voters and movers and drivers of national politics, our self-image and awareness of our power and influence is evolving,” said Aimee Allison, found of She the People, which hosted the first presidential forum aimed specifically at female voters of color.

Trump appealed to black voters during the 2016 campaign by saying “What the hell do you have to lose?” and ended up with only 8 percent of the black vote. But the president again is saying he will try to win over black voters, frequently citing low unemployment and his own success in signing criminal justice legislation. So far, there is no evidence to suggest that he will succeed.

But the first test of the decisiveness of black voters will come in the primaries. African Americans make up roughly 13 percent of the U.S. population but 24 percent of the Democratic primary electorate. That number is more formidable in the early primary state of South Carolina, where black voters are two-thirds of primary voters, and in other early voting states like Georgia, Alabama and Virginia.

Biden reminded black reporters in a recent roundtable that his strength is not just with working-class whites, but with the black voters he’s known for more than half a century in politics.

“After all this time, they think they have a sense of what my character is and who I am, warts and all,” Biden said. “I’ll be surprised if you find any African Americans that think I’m not in on the deal, that I’m not who I say I am … I’ve never, ever, ever in my entire life been in circumstances where I’ve ever felt uncomfortable being in the black community.”

He acknowledged that his familiarity is no assurance of success. And he noted that black voters may ultimately prefer black candidates like Sens. Kamala Harris of California or Cory Booker of New Jersey. First, though, one of them would have to prove to black voters that they were viable alternatives.

Black voters can be decisive not only in determining the Democrats’ nominee but also the ultimate winner. While Democrats have peaked in recent cycles with white voters at around 40 percent, black voters have been their most loyal constituency.

But in 2016, a drop-off among black voters had consequences. Black voter turnout dropped from 65.3 percent in 2012 to 59.6 percent, and Hillary Clinton received 89 percent of the black vote, compared with 93 percent for Barack Obama in 2012 and 95 percent in 2008.
“It comes down to a strategy decision that campaigns have to make: Do they believe that the way to win the White House is to win white voters, or do they believe that the way to White House is to mobilize voters of color?” said Leah Daughtry, who recently hosted a 2020 Democratic forum for black faith voters in Atlanta.

In the past, Biden would have been a prohibitive favorite, said LaTosha Brown, co-founder of Black Voters Matter. But black voters are demanding that candidates deliver on their priorities in a way they haven’t done in recent history.

“Black folks are looking to figure out who white voters are going to align with, but I don’t think that’s the driver that it has been in the past,” she continued. “Black voters, like white voters, are increasingly frustrated with the process. No longer is it good enough to choose between the devil or the witch.”