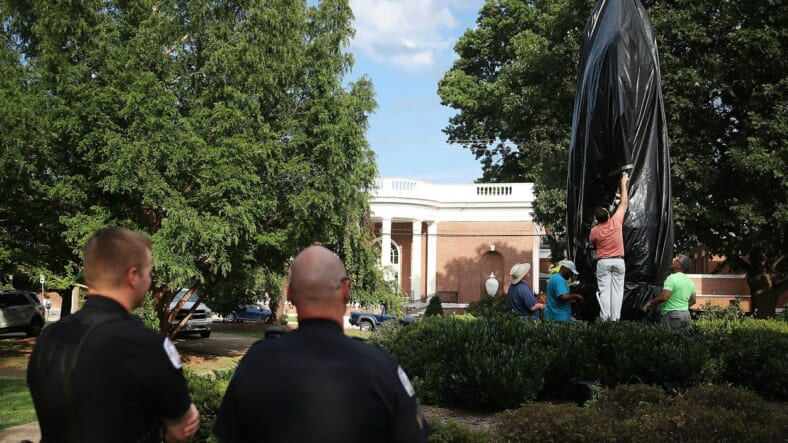 Police officers watch as the black sheet that was put over the statue of Confederate Gen. Robert E. Lee, is repaired after a man tried to take ot off, on August 23, 2017 in Charlottesville, Virginia. Earlier this week the Charlottesville city council voted unanimously to cover Confederate statues in black cloth. (Photo by Mark Wilson/Getty Images)

The removal of a confederate statue which was the focal point of the 2017 deadly white nationalist rally in Charlottesville has been blocked by a Virginia judge.

The decision came from Circuit Court Judge Richard Moore, ruling an attempt to remove the Robert E. Lee statue violates laws protecting war memorials. The decision concluded the March 2017 lawsuit against the Charlottesville City Council to remove the statue due to racial interpretation.

The removal sparked the August 2017 Unite the Right rally, which turned violent and resulted in a car being driven into a group of counter-protesters, injuring many and killing Heather Heyer.

Charlottesville newspaper The Daily Progress reports Moore issued a permanent injunction, which will prevent future removal of the statute. The injunction will also apply to the statue of confederate General Stonewall Jackson, which is also in the town. Moore states the law that protects war memorials does not have the intent of racial discrimination.

“I don’t think I can infer that a historical preservation statute was intended to be racist,” he said. “Certainly, (racism) was on their minds, but we should not judge the current law by that intent.”

Ralph Main, who represented the plaintiffs, stated the covering of statues by tarps went against the state law and also caused emotional distress to the clients. The distress was cited as a reason for damages and a covering of attorney fees. There are no damages that will be awarded in the ruling and attorney fees will be given the plaintiff’s counsel.

READ MORE: Charlottesville’s Mayor Nikuyah Walker talks about the long road of hope and healing in her city

The 12 plaintiffs requested $500 each. The plaintiffs were also seeking $604,038.33 in legal costs, which a majority can be associated with with the hourly rates for four attorneys.

The request for damages was challenged by Lisa Robertson, chief deputy city attorney representing the city and City Council, who cited it should only be awarded for physical harm.

“Whenever something of public value is hidden from view, that is a loss, and there are damages associated with that,” Moore responded. “It may not be a tangible harm, but it is present, nonetheless. Certainly, the plaintiffs felt it.”

Earlier Moore stated the covering of the statues did not go against the state law, however, he reversed it due to the realization that City Council had no intention of removing the tarps.

The tarps were ordered to be removed after six months. The covering was originally believed to be used as a sign of mourning. Moore states it would have been more appropriate for 30 to 60 days of cover.