GOP split over impeachment pushback as Democrats plow ahead 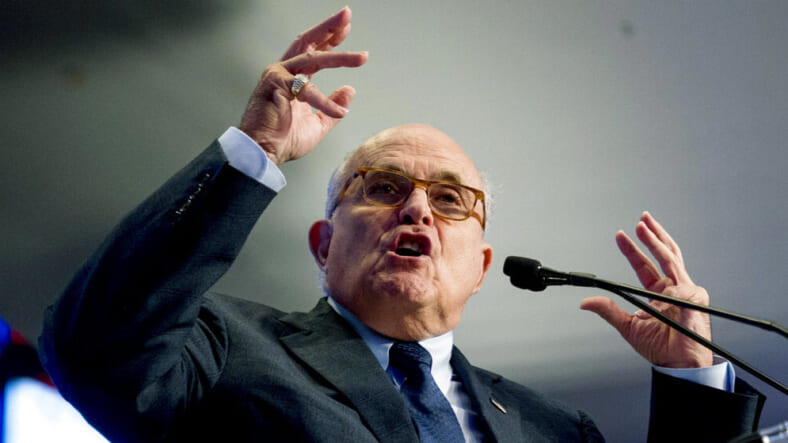 FILE – In this May 5, 2018, file photo, Rudy Giuliani, an attorney for President Donald Trump, speaks in Washington. Giuliani says he’d only cooperate with the House impeachment inquiry if his client agreed. Central to the investigation is the effort by Giuliani to have Ukraine conduct a corruption probe into Joe Biden and his son’s dealings with a Ukrainian energy company. Trump echoed that request in a July 2019 call with Ukraine’s president. The House Intelligence Committee is leading the inquiry, and Chairman Adam Schiff hasn’t decided if he wants to hear from Giuliani. AP Photo/Andrew Harnik, File)

As the Democrats drive an impeachment inquiry toward a potential vote by the end of the year, President Donald Trump’s allies are struggling over how he should manage the starkest threat to his presidency. The jockeying broke into the open Sunday on the talk show circuit, with a parade of Republicans erupting into a surge of second-guessing.

At the top of the list: Rudy Giuliani’s false charge that it was Ukraine that meddled in the 2016 elections. The former New York mayor has been encouraging Ukraine to investigate both Biden and Hillary Clinton.

“I am deeply frustrated with what he and the legal team is doing and repeating that debunked theory to the president. It sticks in his mind when he hears it over and over again,” said Tom Bossert, Trump’s former homeland security adviser. “That conspiracy theory has got to go, they have to stop with that, it cannot continue to be repeated.”
Not only did Giuliani repeat it Sunday, he brandished pieces of paper he said were affidavits supporting his story.

“Tom Bossert doesn’t know what’s he’s talking about,” Guiliani said. He added that Trump was framed by the Democrats.

Meanwhile, Rep. Jim Jordan, R-Ohio, heatedly said Trump was merely asking Ukrainian President Volodymyr Zelenskiy to root out corruption. That, Jordan said, includes Hunter Biden’s membership on the board of a Ukrainian gas company at the same time his father was leading the Obama administration’s diplomatic dealings with Kyiv. There has been no evidence of wrongdoing by either of the Bidens.

Mixed messaging reflects the difficulty Republicans are having defending the president against documents released by the White House that feature Trump’s own words and actions. A partial transcript and a whistleblower complaint form the heart of the House impeachment inquiry and describe Trump pressuring a foreign president to investigate Biden’s family.

In a series of tweets Sunday night, Trump said he deserved to meet “my accuser” as well as whoever provided the whistleblower with what the president called “largely incorrect” information. He also accused Democrats of “doing great harm to our Country” in an effort to destabilize the nation and the 2020 election.

Trump has insisted the call was “perfect” and pushed to release both documents.
“He didn’t even know that it was wrong,” said House Speaker Nancy Pelosi, describing a phone call from Trump in which the president suggested the documents would exonerate him.

But Democrats seized on them as evidence that Trump committed “high crimes and misdemeanors” by asking for a foreign leader’s help undermining a political rival, Democrat Joe Biden. Pelosi launched an impeachment inquiry and on Sunday told other Democrats that public sentiment had swung behind the probe.

By all accounts, the Democratic impeachment effort was speeding ahead with a fair amount of coordination between Pelosi, Democratic messaging experts and its political operation.
House Intelligence Committee Chairman Adam Schiff said Sunday that he expects the whistleblower to testify “very soon,” though details were still being worked out and no date had been set. Hearings and depositions were starting this week. Many Democrats are pushing for a vote on articles of impeachment before the end of the year, mindful of the looming 2020 elections.

Schiff said in one interview that his committee intends to subpoena Giuliani for documents and may eventually want to hear from Giuliani directly. In a separate TV appearance, Giuliani said he would not cooperate with Schiff, but then acknowledged he would do what Trump tells him. The White House did not provide an official response on whether the president would allow Giuliani to cooperate.

Lawyers for the whistleblower expressed concern about that individual’s safety, noting that some have offered a $50,000 “bounty” for the whistleblower’s identity. They said they expect the situation to become even more dangerous for their client and any other whistleblowers, as Congress seeks to investigate this matter.

On a conference call Sunday, Pelosi, traveling in Texas, urged Democrats to proceed “not with negative attitudes towards him, but a positive attitude towards our responsibility,” according to an aide on the call who shared the exchange on condition of anonymity. Polling, Pelosi said, had changed “drastically” in the Democrats’ favor.

A one-day NPR/PBS NewsHour/Marist poll conducted Sept. 25 found that about half of Americans — 49% — approve of the House formally starting an impeachment inquiry into Trump.

There remains a stark partisan divide on the issue, with 88% of Democrats approving and 93% of Republicans disapproving of the inquiry. But the findings suggest some movement in opinions on the issue. Earlier polls conducted throughout Trump’s presidency have consistently found a majority saying he should not be impeached and removed from office.
House Democratic Caucus Chairman Hakeem Jeffries of New York urged the caucus to talk about impeachment by repeating the words “betrayal, abuse of power, national security.” The Democrats’ campaign arm swung behind lawmakers to support the impeachment drive as they run for reelection, according to another call participant to spoke on condition of anonymity.

The contrast with the Republicans’ selection of responses was striking.

A combative House Republican leader Kevin McCarthy said that nothing in Trump’s phone call rose to the level of an impeachable offense.

“Why would we move forward on impeachment?” the California Republican said. “There’s not something that you have to defend here.”

Bossert, an alumnus of Republican George W. Bush’s administration, offered a theory and some advice to Trump: Move past the fury over the 2016 Russia investigation, in which special counsel Robert Mueller found no evidence of conspiracy but plenty of examples of Trump’s obstruction.

“I honestly believe this president has not gotten his pound of flesh yet from past grievances on the 2016 investigation,” Bossert said. “If he continues to focus on that white whale, it’s going to bring him down.”

Two advisers to the Biden campaign sent a letter Sunday urging major news networks to stop booking Giuliani on their shows, accusing Trump’s personal attorney of spreading “false, debunked conspiracy theories” on behalf of the president. The letter to management and anchors of shows at ABC News, NBC News, CBS News, MSNBC, CNN and Fox News added: “By giving him your air time, you are allowing him to introduce increasingly unhinged, unfounded and desperate lies into the national conversation.”
___
Giuliani appeared on ABC’s “This Week” and CBS’ “Face the Nation,” while Schiff was interviewed on ABC and NBC’s “Meet the Press.” Bossert spoke on ABC and Miller on “Fox News Sunday.” Jordan appeared on CNN’s “State of the Union.” Pelosi and McCarthy appeared on CBS’ “60 Minutes.”
___
Associated Press writers Kevin Freking, Eric Tucker and Mary Clare Jalonick in Washington; writer Bill Barrow in Atlanta; and AP Polling Director Emily Swanson contributed to this report.
___
Follow Kellman on Twitter at http://www.twitter.com/APLaurieKellman