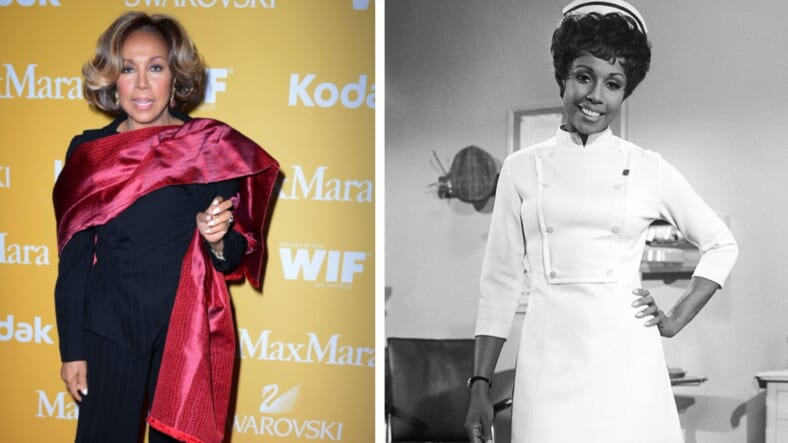 Diahann Carroll, the gorgeous legend of film, tv, and stage passed away at the age of 84, but she leaves us with a treasure trove of her work to cherish. Whether she was a widowed nurse (Julia), a hard-working single mother of six (Claudine), a brassy fashion icon (Dynasty), or the no-nonsense mother of Whitley Gilbert (A Different World), Carroll brought into each role  layers of elegance, grace, regality and of course, stunning beauty.

Let’s zig zag through time and take in the many different forms the trail-blazing Ms. Diahann Carroll shared with us along her life’s journey.

American jazz singer Diahann Carroll at the Washington Hotel in London, 25th October 1957. She is in the UK to appear on the television show ‘Chelsea at Nine’. (Photo by Ron Burton/Keystone/Hulton Archive/Getty Images)

28th December 1982: TV personality David Frost and his fiancee, actress Diahann Carroll, at The Duke of York theatre in London, to watch the show ‘Once Upon A Time’, which Frost produced. (Photo by Dennis Oulds/Central Press/Getty Images)

FILE – This Sept. 24, 1986 file photo shows, Diahann Carroll, John Forsythe, Linda Evans and Joan Collins from “Dynasty” cutting a cake to commemorate the production of 150 episodes of the show in Los Angeles. Carroll died, Friday, Oct. 4, 2019, at her home in Los Angeles after a long bout with cancer. She was 84. (AP Photo/Reed Saxon, File)

FILE – This Sept. 20, 1987 file photo shows actress Diahann Carroll at the Emmy Awards in Los Angeles. Carroll passed away Friday, Oct. 4, 2019 at her home in Los Angeles after a long bout with cancer. She was 84. (AP Photo/Douglas Pizac, File)