PHOTOS: Halloween tricks and treats from Ciara, Missy, Nicki, Cardi B and more 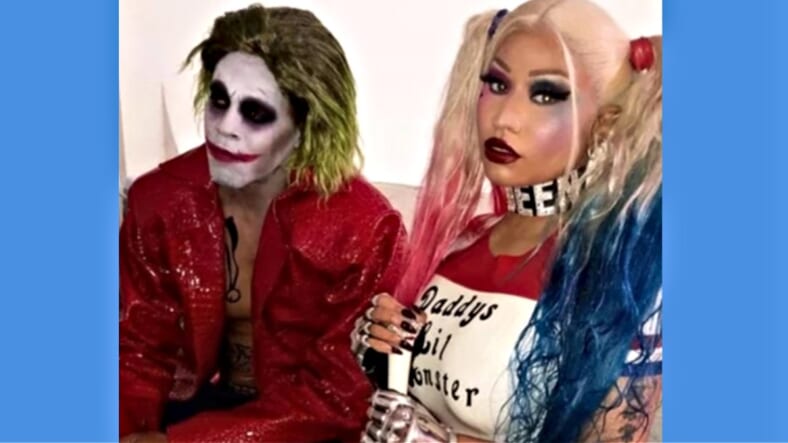 Halloween came early for several celebrities this year prompting stars like Tracee Ellis Ross, Ciara, Russell Wilson, Missy Elliott, Deon Cole, and more to serve up some seriously creative costumes. Some opted to pay tribute to their favorite icons while others decided to celebrate themselves, flaunting their fierce fashion moments on social media for all to enjoy.

TheGrio was not only impressed but even perplexed by a few of these choices. Nonetheless, dressing up is all in fun with the spirit of Halloween kicking off the holiday festivities.

Check out a few of the most outrageous Halloween looks from some of our favorites celebs:

Sienna and Future, Jr. also got into character as Michael and Janet Jackson. According to E! News, the kids’ custom-made costumes cost between $1,200 to $1,400 to create.

Newly married Kenneth Petty and Nicki Minaj are stunning in their Harley Quinn and Joker costumes.

Tethered. The Johnsons do it again. Shout out to @blackishabc hair, makeup, and wardrobe for killing the Halloween game. And there’s still more! This Tuesday 9:30pm/8:30c #blackish #halloween

The cast of black-ish paid homage to Jordan Peele‘s masterpiece Us, dressing up as The Tethered for the show’s special Halloween episode.

While we’re not sure exactly who Laverne Cox is channeling, it’s safe to say she’s ready to fight some crime with a smile.

WOW?? This Halloween I decided to RECREATE my 1st album cover from 22 YEARS AGO one of these pictures I took ONLY 3 DAYS AGO the other was 22 YEARS AGO CAN YALL TELL THE DIFFERENCE???? pic.twitter.com/6BGrjjM78w

Missy decided to celebrate one of her most iconic looks (and the fact that she hasn’t aged a day in 22 years) by recreating the cover of her debut album, Supa Dupa Fly.

OH, you shonuff might want to Watch an all new blackish this Tuesday on ABC. We get crazy. #justakidfromthechi #blackish #halloween #halloweencostume #shonuff #thelastdragon #kissmyconverse

This funny man may have won Halloween with his take on The Last Dragon.

The black-ish star dressed up as Snoop Dogg and posed with her inspiration at Gabrielle Union‘s 47th birthday party over the weekend. (Fun fact: Ross and Union are birthday twins.)

Cardi B seems to enjoy being a naughty nurse with bright red hair to match her ensemble.

Johnson decided to pay homage to another well-known socialite, Paris Hilton. Not sure if being barefoot is an intentional part of this look or not, but it seems to work.

Kudos to Mixed-ish actress Tika Sumpter for taking it all the way there in her interpretation of Detective Ricardo “Rico” Tubbs from the 1980’s hit show, Miami Vice.