Hours before he died, "Pops" posted his final comedy skit for fans explaining how to make 'Poor Man's Gumbo' 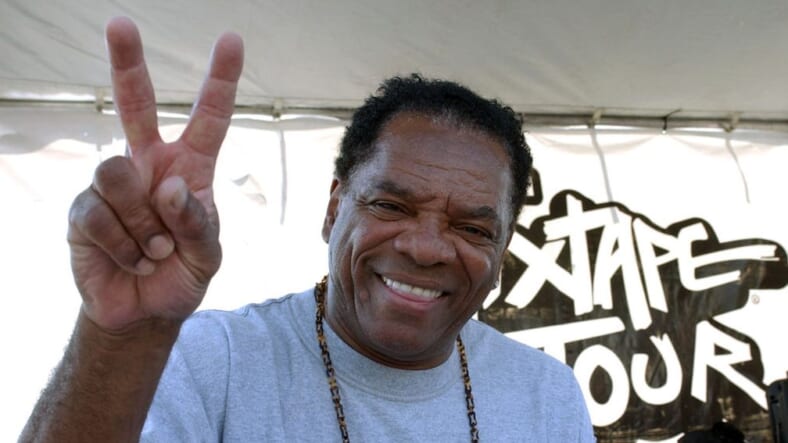 John Witherspoon looks on as Los Angeles Street Ballers compete for the chance to play against the 2004 Team AND1 on the blacktop of the The Great Western Fourm in Inglewood, California June 9, 2004. (Photo by Steve Grayson/WireImage)

John Witherspoon had us rolling just hours before he died.

Witherspoon, 77, posted a 15-minute video to his YouTube channel on Oct. 28 cooking what he called “Poor Man’ Gumbo.” He wore little more than an apron and a chef’s toque blanche, and discussed how important it was to create a good roux.

He explained that his time in the kitchen was going to be a special occasion, as he dropped a little wisdom on us. Witherspoon aimed to show fans the difference between a gumbo for people with money, and those that can’t quite afford “shrimp and lobster… Alaskan King crab.”

Early on in the video, Witherspoon explained the reason why he hadn’t posted to his YouTube page in a year was that he had been working.

“Now I know I haven’t been here for a while, but I’ve been busy doing other things,” Witherspoon said in the clip. “We about to do the Boondocks, and we gonna do another Friday, but I’ve been around working on the road because I’ve been very, very busy and got a big schedule this year.”

He was in fact set to reprise his role as Mr. Jones in the cult classic Friday franchise. He was also due to return to The Boondocks, according to Deadline.

But unfortunately, Witherspoon died on Tuesday, Oct. 29 in his Sherman Oaks, California home.

Witherspoon’s family has long called the actor and comedian “one of the hardest working men in show business.” In announcing his death, his wife and sons tweeted: “It is with deep sadness we have to tweet this, but our husband & father John Witherspoon has passed away. He was a Legend in the entertainment industry, and a father figure to all who watched him over the years. We love you “POPS” always & forever.”

It is with deep sadness we have to tweet this, but our husband & father John Witherspoon has passed away. He was a Legend in the entertainment industry, and a father figure to all who watched him over the years. We love you “POPS” always & forever.

We’re so grateful he left us with one more laugh. Witherspoon’s final words in the video were, “Thank you. Love each other.”

Check out his last video to fans below: