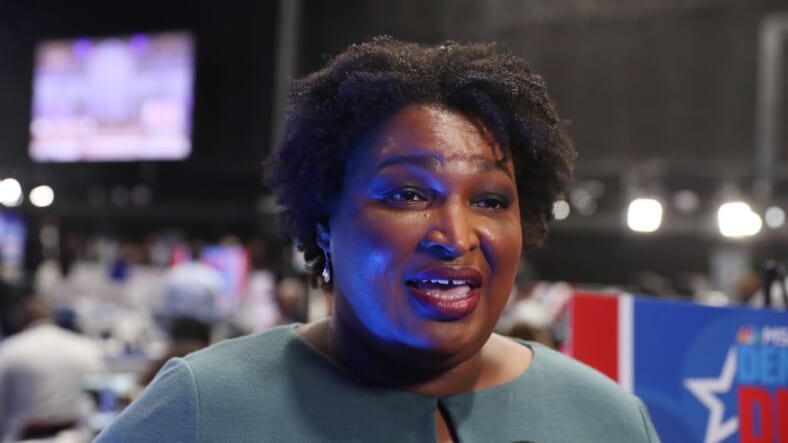 ATLANTA, GEORGIA – NOVEMBER 20: Democratic politician Stacey Abrams speaks to the media before the Democratic Presidential Debate at Tyler Perry Studios November 20, 2019 in Atlanta, Georgia. Ten Democratic presidential hopefuls were chosen from the larger field of candidates to participate in the debate hosted by MSNBC and The Washington Post. (Photo by Joe Raedle/Getty Images)

Abrams is executive producing Never Tell, for CBS and PatMa Productions, a drama based on a novel that Abrams published in 2004 using the pen name, Selena Montgomery. Abrams has written eight books under the nom de plume, according to The Hollywood Reporter.

Never Tell is the story of a linguistics professor with a past who partners with an investigative reporter after discovering a cryptic message that provides the only information in a mission persons case. The story is set in New Orleans and helps to launch the pair as a force that helps the New Orleans Police Department solve crimes.

The TV drama is being written for TV by Talicia Raggs, who co-produces NCIS: New Orleans.  Raggs also worked on The Originals and Switched at Birth, and will join Abrams and Nina Tassler and Denise Di Novi, both of PatMa, in executive producing the story. Tassler formerly worked as president of CBS Entertainment.

In addition to Never Tell, CBS has an exciting lineup slated to run, including The Lincoln Lawyer, Michael Connelly’s work that was adapted by David E. Kelley, which will run as a series; The Equalizer, in which Queen Latifah will star in and executive produce; The International starring Dolph Lundgren and executive produced by Sylvester Stallone; and Bent from co-executive producer, Vaun Wilmott.

On the Never Tell project, Abrams is being represented by UTA.

Abrams was elected to the Georgia House of Representatives where she served for 10 years. She ran for governor in Georgia in 2018 but lost to Republican Brian Kemp. In February, she was chosen by the party to respond to President Donald Trump’s State of the Union address.

READ MORE: John Legend calls Trump a cancer’ who should be removed from office immediately