A witness to the execution of 17-year-old Laquan McDonald, killed by Chicago Police in 2014, has settled with the city after claiming she was intimidated by police officers to change her story. 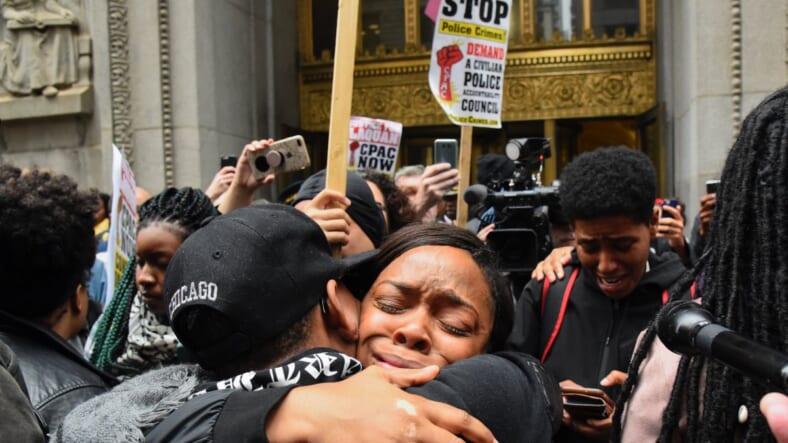 A witness to the execution of 17-year-old Laquan McDonald, killed by Chicago Police in 2014, has settled with the city after claiming she was intimidated by police officers to change her story.

Alma Benitez, a mother of three, reached a settlement after more than three years of delays. According to the Chicago Tribune, Benitez was in a Burger King drive-thru when she saw McDonald being confronted by several officers and she witnessed his death at the hands of former police officer Jason Van Dyke.

“It was super-exaggerated,” Benitez told NBC Chicago at the time. “You didn’t need that many cops to begin with. They didn’t need to shoot him.”

The Chicago Tribune reports that she was among the first witnesses to be interrogated by the police after she yelled to the police to stop shooting McDonald because “he was dead already!” Disturbing dashcam footage released a little more than a year later showed that McDonald was walking away from police when Van Dyke shot him within six seconds of exiting his police car. While the teen was motionless on the ground, Van Dyke continued to shoot him, unloading all 16 of his bullets.

Van Dyke was charged in McDonald’s murder and later convicted. He was sentenced to nearly seven years.

According to the Chicago Tribune, Benitez was interrogated for six hours and misled about what the dashcam footage showed, with some of the officers claiming she was lying. She said another officer asked her why she had even cared and how she should be happy they got him off the streets.

“It felt like I was in a lion’s cage,” Benitez said in an interview with the city inspector general’s office. “I was really shocked that day. I’m like, these are the people I’m supposed to trust when making a police report?”

Though Benitez was not asked to testify in the subsequent court proceedings because she had changed her story, she filed suit against the city of Chicago alleging police tried to cover-up McDonald’s death by intimidating witnesses and writing false reports. A recently released inspector general report found that at least 16 officers were involved in the cover-up of the McDonald shooting, according to NBC News. The report had been kept secret for three years.

Benitez’s lawyer, Amanda Yarasso, said she was glad that her client finally had some closure.

“I’m glad she’s getting some compensation that she can leverage into a real positive for her and her family,” Yarasso said. “For Alma, it was never about the money — it was about standing up for truth and justice.”

According to the Chicago Tribune, the amount of the settlement will not be disclosed until the City Council’s Finance Committee considers it for approval, which could possibly be as soon as its next meeting in December.