Kid Rock continues to bash Oprah during his recent performance 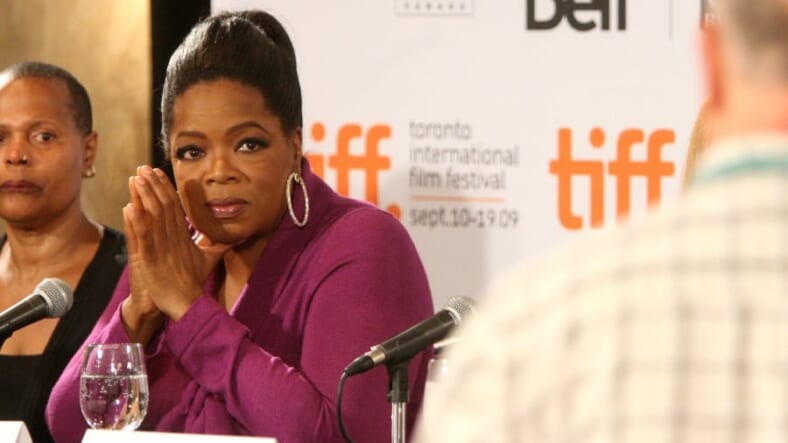 Kid Rock is receiving backlash after his derogatory remarks and sexually explicit insults towards Oprah Winfrey, and other women in entertainment.

During a performance at “Kid Rock’s Big Ass Honky Tonk Rock N’ Roll Steakhouse,” in Nashville earlier this week, the rocker could be seen and heard on camera, telling the likes of Winfrey, Joy Behar, and Kathie Lee Gifford to “suck d*** sideways.”

“I’m like, Oprah Winfrey or Joy Behar, they can suck d— sideways,” the star said in the video, which was obtained by TMZ. Rock even proceeded to repeatedly motion his hands and make a gesture, as if he were emulating someone’s head toward his crotch.

The 48-year-old artist is seen on video continuing his rant saying, “F** Oprah Winfrey and fuck Kathie Lee Gifford.” Someone in the audience, possibly the person recording the incident, can be heard saying, “He’s blackout drunk,” in the background.

Later into his rant, Kid Rock addresses those who he claims may try to accuse him of being “a racist” later.

He continued, “I’m not the bad guy in this equation. I’m the f–in’ guy you want, like, hey, he’s pretty cool.”

Last night (Nov. 29), Rock tweeted the reason behind his personal disdain for the billionare mogul and powerhouse:

My people tried to get me to do The Oprah Winfrey show years ago and her people wanted me to write down 5 reasons why I loved her and her show…?️‍? I said fuck that and her. End of story.

Rock’s rant occurred just days shy of the one-year anniversary of him doing a live morning show with “Fox & Friends” in which he referred to Joy Behar as the b-word, during a discussion with host Steve Doocy. “Screw that Joy Behar bi###,” Rock said.

This isn’t Kid Rock’s first time being flagged for being out of line for women, and more specifically, women of color.

Back in 2015, during Rock’s controversial interview with Rolling Stone magazine, he expressed his disinterest in Beyonce’s fandom, and undermined her star-power:

“Beyoncé, to me, doesn’t have a f***ing ‘Purple Rain,’ but she’s the biggest thing on earth,” Rock told the magazine. “How can you be that big without at least one ‘Sweet Home Alabama’ or ‘Old Time Rock & Roll’?”

His then went on to criticize Mrs. Carter’s popularity, as it pertains to beauty. “People are like, ‘Beyoncé’s hot. Got a nice f***ing ass.’ I’m like ‘Cool, I like skinny white chicks with big tits.’ Doesn’t really f***ing do much for me.”