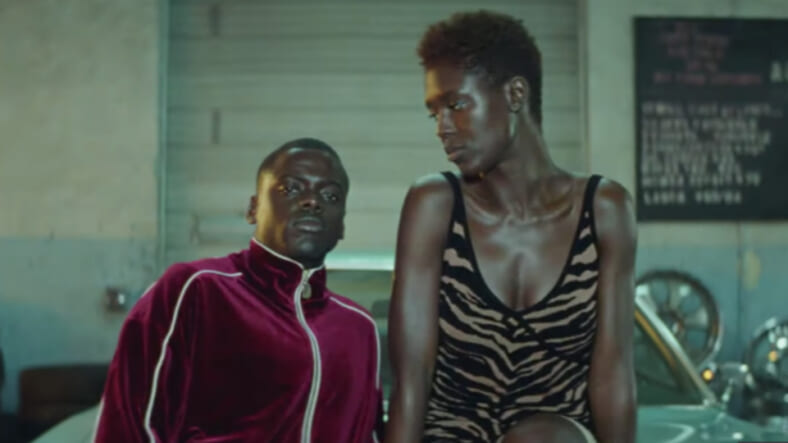 While the main plot of Queen & Slim tackles big issues like police brutality and the plight of Black folks in America today, the genius of the film lies in the intricate details.

Through the title characters, (who are actually unnamed until the last moments of the film) Lena Waithe manages to illuminate the complexities and vastness of the Black experience, while zeroing in on two very specific people. Jodie Turner-Smith is mesmerizing as a buttoned-up, high achieving defense attorney who’s led by an intense desire for justice. Daniel Kaluuya is flawless as Slim. He is more easy-going, and doesn’t expect too much from anyone. He relishes the simple things in life like faith and family and accepts the way things are without much thought given to how they should be.

Daniel Kaluuya & Jodie Turner-Smith on their reactions to ‘Queen & Slim’: “I was speechless”

When confronted by an overly-aggressive police officer, another dichotomy is presented. While both characters recognize that this officer is out of bounds, Slim is intent on complying with the irrational demands, willing to accept that this is par for the course when a Black man dares to get behind the wheel. Queen, on the other hand, is hell-bent on asserting their rights, even though she’s equally aware of how quickly these interactions can turn from tense to deadly.

Queen & Slim plays out the way you know it will. They flee, they fall in love, they die.

But like the old adage explains: it’s the journey, not the destination. In this film and in this life; it’s the little things that make it truly remarkable.

My reaction to the film wasn’t immediate. It bubbled up over time, the images festering hours after I left the theater.

Given the proven talents of the women behind the film, my expectations were high going in. Melina Matsoukas’ knack for capturing the beauty of Blackness on screen was on full-display and I couldn’t recall a time where I had seen a Black woman take up the space that Jodie Turner-Smith did, ever. We got to learn every curve of her figure, every angle of her face so intimately, it seemed like I must have seen her in 20 films before. I could pull her up in my memory the way I can with Julia Roberts’ mouth (a feature that was ingrained in my mind somewhere between the fifth and fiftieth time I watched Pretty Woman or My Best Friend’s Wedding growing up).

The stunning visuals made such an impact after one watch, my mind was blown. The music was curated so precisely it served as a heartbeat of the film, providing another element to marvel at. Still, there were several moments that nagged at me, seemingly simple sentences that I knew were loaded with meaning.

Did I just watch Thelma & Louise with Black folks?

I dreamt about it that night. I awoke with an entirely different opinion than the one I had as the credits rolled.

Why did they run when the dash-cam footage could clearly show they were the victims of this racist cop?

She’s a lawyer. Why didn’t she realize that this was a clear case of self defense?

Why weren’t her white pants more bloodied after she got shot in the leg? How could she rock those snake-skin boots with a gunshot wound?

For a film so loaded with big issues and matters of life and death, the pace seemed slower than it should have. They were way too relaxed.

Who dafuq would pull over to dance when you’re running for your life? Why are these two people being hunted by the entire country posing for photos when they should be hauling ass to Cuba?

The lack of chaos, the lack of panic, and the lack of urgency that disturbed me while I watched intrigued me once I had time to reflect on the magnitude of those choices.

WATCH: Melina Matsoukas on casting British leads in ‘Queen & Slim’: “All they see is Blackness”

If nothing else, Queen & Slim is a snapshot of this moment in time.  The harsh reality for Black people in this country is that it makes no difference if you believe in God or don’t, have a job or have a career, love your family, pay your taxes, or don’t.

Perhaps that’s what is so disheartening, so painful, and so frustrating about the ending we all knew was coming. Of course we would rather see these two people who embody any and every Black person you know in some form or fashion make it out alive. But this film is not a fantasy. Our heroes do not get away. And somehow, they’re heroes anyway. Why? Because they lived.

Ernest (aka Slim) states that his measure of a life well-lived is simple. He wants to be seen, loved, missed, by one person. That is all.

They couldn’t be any more different or any more alike.

At first, the love story annoyed me. There wasn’t an instant attraction or fiery passion between these two unlikely lovers. Their connection was a slow-build after they were bound together in an instant. Their love unfolded the way it often does. Slowly. Unexpectedly. Surprisingly. Real love makes you question everything you thought you knew about yourself before this other person came into the picture and changed it all. It doesn’t happen because of intentional praise or met expectations. Just like some people believe you can’t change someone. I think this movie shows that love changes everything and it exists despite the circumstances.

Just this year, I have seen more film and television plots revolving around police brutality than I can list and each time, no matter how exquisitely executed the project is, it feels like old hat. I know this story, I get how much it sucks. Now what? Just like when I read another name of an unarmed Black person gunned down by police, or see a school shooting unfold on the news. It’s paralyzing. It’s terrifying. And I’m nearly numb to it.

It’s not because I don’t care. It’s not because I’m not scared. In fact, it’s because I am so incredibly scared that the only way I can drive my kids to school or let my husband drive to work each day is by convincing myself that it won’t happen to me. I have to pretend I have a choice in the matter of whether or not my son makes it home tonight or I’ll stop living.

Today, we are forced to choose sides, to make judgements, to cancel or contribute to whatever the issue of the day is. We judge each other, we judge ourselves. It lies at the core of so many moments. Why did the Black boy kill the Black police officer? Because all he knows is that all cops are bad. Why did the Black police officer who seemed like a sell out let them go while the Black man who looked like he would be down for the cause ultimately sell them out?

The fact that a Black man is the one who turned them in was one of the most infuriating parts of the script and also the most enlightening. As much as we as a community like to think we’re in this together, the fact is, we’re not. How often do we see Black folks picking and choosing when to lift each other up and when to tear each other down? How often does the success of one incite scorn from the other? As white America continues to judge and ridicule us, who is a more outspoken critic of Black women than the Black man? Or the Black woman?

Queen & Slim is all of us in a time of crisis. Their crisis was evident; on the run from the law. Our crisis is the reality of what it means to be Black in America today.

“Thank you for this journey, no matter how it ends.”