Though reluctant to speak publicly on his successor, Holder has recently broken that rule and says Barr's comments are 'deeply inappropriate' 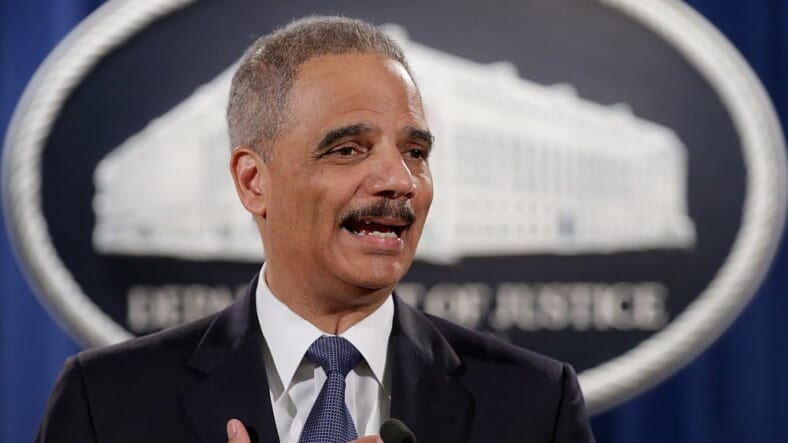 Attorney General Eric Holder delivers remarks about the Justice Department’s findings related to two investigations in Ferguson, Missouri, at the Robert F. Kennedy Department of Justice Building March 4, 2015 in Washington, DC. Holder delivered the remarks for an audience of department employees who worked on the investigations after a white police officer shot and killed an unarmed black teenager, sparking weeks of demonstrations and violent clashes. (Photo by Chip Somodevilla/Getty Images)

Eric Holder, the former Attorney General under President Barack Obama, blasted the present attorney general, William Barr, for a series of recent comments that he made that shows he is “unfit to lead the Justice Department.”

Holder said he has been reluctant to speak up to “publicly criticize my successors,” however he said he opted against that stance because Barr is treading on dangerous waters with his rhetoric about absolute presidential powers and his veiled threat to communities that he deems don’t show law enforcement enough respect.

In a Washington Post op/ed, Holder called Barr’s comments “deeply inappropriate for America’s chief law enforcement official” and said “since the moment he took office,” Barr’s comments and actions have been “fundamentally inconsistent with his duty to the Constitution. Which is why I now fear that his conduct – running political interference for an increasingly lawless president – will wreak lasting damage.”

Holder elaborated in the opinion piece.

“Barr has made a series of public statements and taken actions that are so plainly ideological, so nakedly partisan and so deeply inappropriate for America’s chief law enforcement official that they demand a response from someone who held the same office,” Holder wrote.

For example, on Nov. 15, Barr addressed a Federalist Society convention, telling the conservative crowd that the top elected position in the nation had “become smothered by the encroachments of the other branches,” of government, according to The USA Today.

In his Washington Post op/ed, Holder called this language “an ode to essentially unbridled executive power” and he cautioned that Barr’s “attempts to vilify the president’s critics sounded more like the tactics of an unscrupulous criminal defense lawyer than a U.S. attorney general.”

Recently, Barr also made controversial comments at a Justice Department event that honored law enforcement. At the ceremony, Barr scolded Americans for not giving police “the respect and support that law enforcement deserves,” and then seemed to hone in on certain communities, believed to be Black and other communities of color.

READ MORE: Eric Holder confirms he will not run for president in 2020

“If communities don’t give that support and respect, they might find themselves without the police protection they need,” Barr said.

Holder took issue with that statement and said, “no one would understand– let alone truly respects – the impartial administration of justice or the role of law enforcement could ever say such a thing.”

“It is antithetical to the most basic tenets of equality and justice, and it undermines the need for understanding between law enforcement and certain communities and flies in the face of everything the Justice Department stands for,” Holder wrote in the Washington Post op/ed.