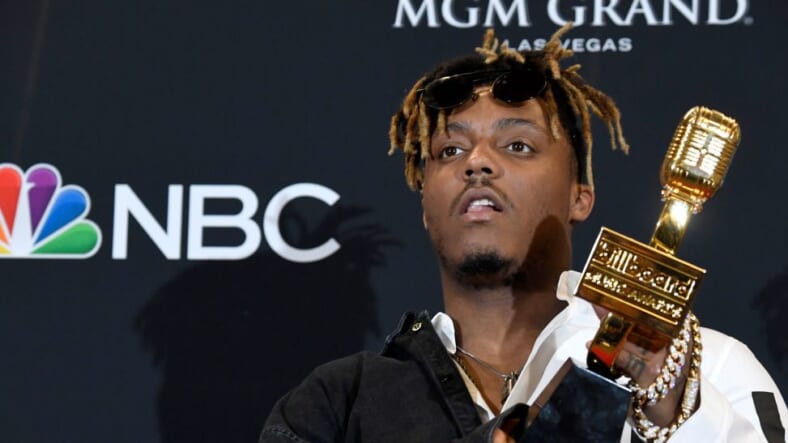 Juice Wrld poses with the award for Best New Artist in the press room during the 2019 Billboard Music Awards at MGM Grand Garden Arena on May 01, 2019 in Las Vegas, Nevada. The rapper died on Sunday after landing in his hometown, Chicago. He was just 21 years old. (Photo by Frazer Harrison/Getty Images)

The heartbroken family of Juice WRLD tells his fans that the honesty and vulnerability he shared in his music was because of his own real-life struggles with addiction.

In a statement to TMZ, Carmella Wallace said her son rapped about drugs not to glorify them but because he wanted to help others who were fighting addiction like he was. The “Lucid Dreams” rapper, whose real name was Jarad Higgins, died Sunday after suffering seizures that may have been caused by popping pills in flight to Chicago’s Midway Airport. When the plane landed, Juice, who had just turned 21 a few days prior, went into cardiac arrest and died.

“We loved Jarad with all of our hearts and cannot believe our time with him has been cut short,” Carmella wrote in a statement for TMZ. “As he often addressed in his music and to his fans, Jarad battled with prescription drug dependency.”

Carmella added that “addiction knows no boundaries and its impact goes way beyond the person fighting it. Jarad was a son, brother, grandson, friend and so much more to so many people who wanted more than anything to see him defeat addiction. We hope the conversations he started in his music and his legacy will help others win their battles as that is what he wanted more than anything.”

When Juice WRLD’s private jet landed in Chicago, police were tipped off by the pilot that some people in the rapper’s entourage had weapons. Police recovered three guns – two 9 mms and a 40-caliber, along with a high capacity magazine and metal-piercing bullets, and arrested two security guards, Chris Long, 36 of California and Henry Dean, 27, of Chicago on misdemeanor gun possession charges.

The police search also found 41 “vacuum-sealed” bags of marijuana and six bottles of prescription codeine cough syrup, according to The Chicago Tribune.

Juice’s girlfriend told police that he had taken the painkiller, Percocet, and was battling a drug problem.

Juice himself was open in sharing his struggles with addiction, both in his music and in interviews. Last year, he told Atlanta’s HOT 107.9 radio station that Lil Peep’s 2017 drug overdose death had made him face just how tough of a battle addiction is.

“It’ll make you think, like … ‘I don’t want that to happen to me.’ But at the same time, you’re already addicted. Your body is screaming for that. … I found that when people do drugs it separates their head from their body even more. It separates their soul from their body even more. ’Cause your mind could be telling you … ‘hell no,’ but your body is dependent,” Juice WRLD said in that interview, before adding “it can tear you apart.”

Carmella’s statement finished with her thanking Juice’s fans and friends and vowing that “Jarad’s legacy of love, joy, and emotional honesty will live on.”