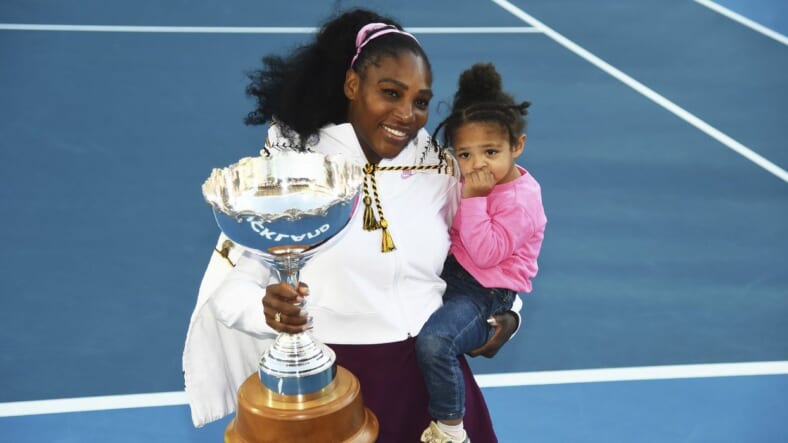 Serena Williams may have figured out the balance between motherhood and her spectacular career as she won the ASB Classic in Auckland, New Zealand, marking her first tennis title since she had her daughter, Alexis Olympia, in 2017.

On Sunday, Williams defeated fellow American Jessica Pegula 6-3, 6-4, according to  PEOPLE magazine. She appeared filled with emotion and raised her hands in the air as the crowd cheered.

Later, Serena grabbed her baby girl and brought her on the court as she hoisted her trophy in the air. “It feels good,” Williams told CNN afterward. “It’s been a long time. I’ve been waiting two years for this moment. I think you could see the relief on my face.”

During the ASB Classic, Williams also advanced to the doubles finals with her friend, Caroline Wozniacki, who retires later this month after the Australian Open. The duo was defeated in the final round, however.

Williams has won 23 Grand Slam singles titles throughout her career, including her most recent while pregnant with Alexis in January 2017. But since her daughter’s birth, and prior to the ASB win, Williams hadn’t won a tournament, although she has made it to the final round several times.

That changed on Sunday.

READ MORE: Serena Williams criticizes her own performance at the U.S. Open Women’s final: ‘It’s inexcusable for me to play at that level’

Williams is donating the $43,000 prize to Australian bushfire relief. Plus, she previously announced that she would be joining fellow tennis greats, Roger Federer and Rafael Nadal, to play in a charity match to raise funds for the destructive fires. The Australian Open Rally for Relief will donate all ticket proceeds to bushfire relief efforts. The games will take place on Jan. 15 at Laver Arena in Melbourne Park.

“This unprecedented bushfire crisis is devastating people, properties, communities, livestock and animals across the country and our hearts go out to all those affected,” Australian Open Tournament Director Craig Tiley said in a statement, according to PEOPLE.

Williams is scheduled to compete in the Australian Open, which begins Jan. 20.