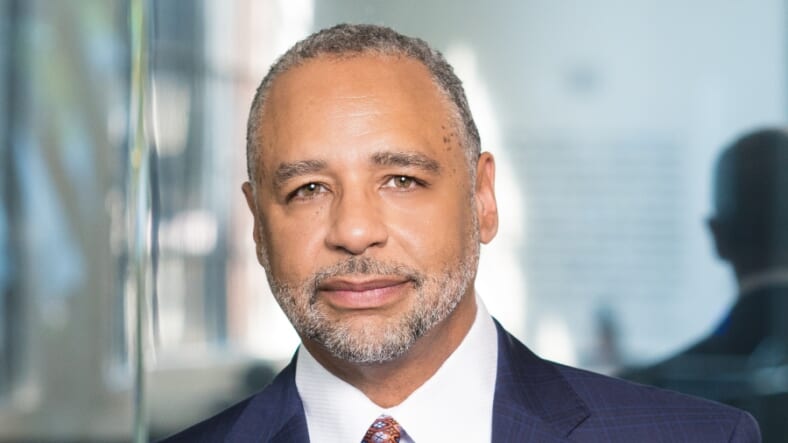 For nearly three decades, award-winning journalist Ed Gordon has been a leading voice in media, sparking thought-provoking conversations in television and radio on BET, NBC, MSNBC, CBS and NPR. We’ve witnessed Gordon interview prominent figures in politics, entertainment, and sports. But it’s the candid conversations that take place after the red light goes off that inspired his latest book, Conversations in Black: On Power, Politics, and Leadership.

Conversations in Black aims to create new narratives for people of color in the continuing quest for equality. The media veteran reached out to friends and acquaintances who he thought as a collective, would be a good representation of who Black America is. The book includes names like Harry Belafonte, Maxine Waters, Stacey Abrams, Al Sharpton, D.L. Hughley, Angela Rye, Tarana Burke, Charlamagne Tha God, Van Jones, Susan L. Taylor, Iyanala Vanzant, Killer Mike, and Jemele Hill to name a few.

With the help of these voices, Gordon hopes the book will be a spark to get everybody talking and to also acknowledge and know that Black power is collective power and an individual’s power.

“You don’t need a national leader to make the change,” says Gordon during an interview with theGrio. “In fact, change can be made in your household, on your block, in your schools, in your homes, just by you making a decision that you have that power.”

The book provides narratives on daily discussion topics ranging from former President Barack Obama, President Donald Trump, “wokeness,” and voting. With the 2020 elections approaching, leaders in the Black community are touting how high the stakes are this time, but Gordon says the Black vote should get something back.

“I think we think that Election Day is the only day you participate,” Gordon says. “If you cast your vote, particularly if your candidate wins, you have to be cognizant of suggesting to that candidate, ‘I gave you my vote, so I need something in return.’

“The Black community has not, over the course of many years, gotten a return for their vote. Even when President Obama was in office, I think he had a hard road to travel once Republicans took over the House and the Senate,” he continued. “Yet African-Americans were almost too afraid to demand of President Obama in certain areas. I think it’s important for the Democratic Party in particular to understand the importance of the Black vote and to understand that that vote comes with a cost and I think African-Americans have to understand that politics is quid pro quo.”

Gordon warned that Black votes should be rewarded with action and that the community should play the political game better than it has been.

“[In the book], we talk about where Black America needs to go and that we all have a part in it.” Gordon adds. “We want people to join our conversation and more importantly, after you have the conversation, it really is about action and movement to make a difference. Without that, it is simply that just dialog, just talking. We’ve done enough of that. Now it’s time for action.“