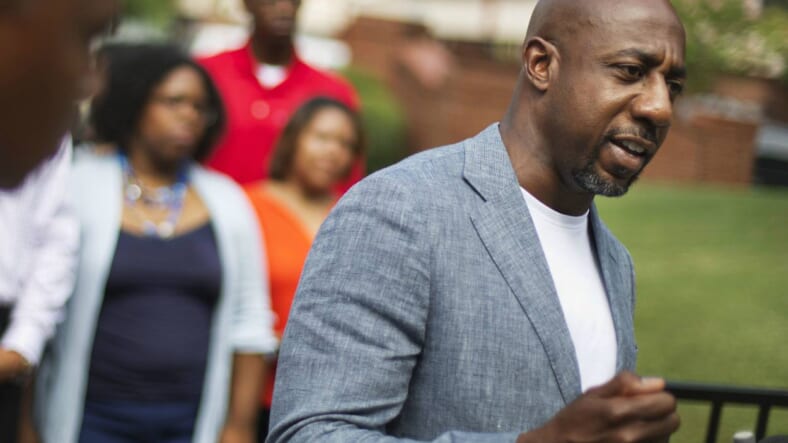 With his influential pulpit at Ebenezer Baptist Church, Warnock immediately brings some Democratic star power to the race — and some powerful friends.

Within hours of entering the race, Warnock locked up perhaps the most coveted endorsement in Georgia Democratic politics when Stacey Abrams, the party’s 2018 nominee for governor, announced she’s supporting his campaign.

Warnock, 50, launched his run with a campaign website video that traces his life from the subsidized Savannah housing project where he lived as a child to becoming pastor at the historic church.

“I think that it’s harder for a kid now who is growing up in similar circumstances than it was for me then,” Warnock said in an interview Thursday morning. “I’m seeing that in the communities I serve as pastor at Ebenezer Church, but I’m seeing it in communities all across this state.”

Loeffler was recently appointed by Gov. Brian Kemp to replace three-term GOP Sen. Johnny Isakson, who stepped down in December because of faltering health. A wealthy businesswoman and political novice, she now must defend the seat in November in an open special election for the remaining two years of Isakson’s term.

Georgia’s other Senate seat also is on the ballot, with Republican Sen. David Perdue seeking a second term. The prospect of two GOP-held seats being up for grabs in November has made the state a political battleground, where Republicans still dominate but Democrats smell opportunity as suburban voters and women move away from President Donald Trump’s GOP.

The race for Loeffler’s seat was scrambled Wednesday when Rep. Doug Collins jumped in. The northeast Georgia Republican announced his campaign on Fox News, where he’s built a national profile defending Trump. Loeffler also has voiced strong support for Trump since her appointment, and is backed by Kemp, the National Republican Senatorial Committee and the U.S. Chamber of Commerce.

Abrams narrowly lost the 2018 governor’s race to Kemp and has since garnered national attention for efforts to protect voting rights. She said in a fundraising email to supporters that she’s endorsing Warnock “because Georgia must have a leader who sees all of us and serves all of us.”

“I have fought beside him to end voter suppression. I worked with him to protect the Affordable Care Act and to expand Medicaid. I prayed with him as we worried for our fellow Americans who have not benefited from an economy that demands more and more from them but delivers less and less,” Abrams’ email says.

Warnock is the third Democrat to join the race. Also running are Ed Tarver, a former federal prosecutor who served as U.S. attorney for Georgia’s Southern District under President Barack Obama; and Matt Lieberman, the son of former senator and vice presidential candidate Joe Lieberman.

Under Georgia’s current special election setup, the more candidates that run, the greater the odds of a January 2021 runoff between the top two finishers, which is required if no candidate receives a majority of votes in November. State House Speaker David Ralston, a longtime Collins friend, has pushed a law that would force party primaries in May. Kemp has threatened to veto that proposal, and it was sent back to a state House committee Thursday morning, lessening its chances of moving forward.

Warnock, the son of two pastors, entered the ministry at an early age. After graduating from Morehouse College, he served at churches in Birmingham, Alabama; New York and Baltimore before becoming Ebenezer’s senior pastor in 2005.

Warnock hasn’t shied away from politics at Ebenezer, where Martin Luther King, Sr., and his son played key roles in the civil rights movement. Warnock hosted an interfaith meeting on climate change alongside former Vice President Al Gore and championed reforms to the nation’s criminal justice system. In 2015 he considered running for the Senate against Isakson, before deciding against it.