U.S. attorney says Kwame Kilpatrick should stay in prison because he shows ‘absolutely no remorse’ 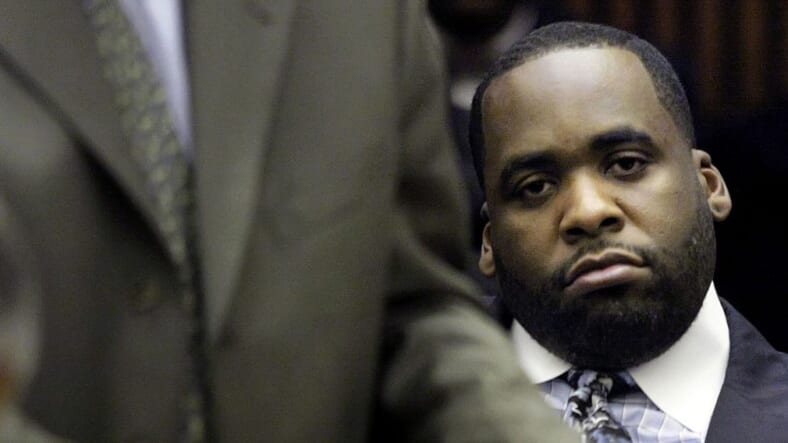 DETROIT - OCTOBER 28: Former Detroit Mayor Kwame Kilpatrick appears in Wayne County Circuit Court for his sentencing October 28, 2008 in Detroit, Michigan. Kilpatrick will spend 4 months in jail as part of a plea deal he accepted back in September in which he plead guilty to two felonies and no contest to a felony assault charge. (Photo by Bill Pugliano/Getty Images)

The top federal prosecutor in southeast Michigan is against Kwame Kilpatrick getting pardoned by the president.

“So far, Mr. Kilpatrick has shown absolutely no remorse for his crimes. He denies any responsibility for the 24 federal felony offenses of which he was convicted, and he has served only one quarter of his sentence,” U.S. Attorney Matthew Schneider told the Detroit Free Press Wednesday, a day after Trump freed 11 white-collar criminals from prison, including former Illinois Gov. Rod Blagojevich.

READ MORE: Ex Detroit mayor Kwame Kilpatrick hopes to get out of prison as Trump commutes sentences for 11 white-collar criminals

Kilpatrick, the former mayor of Detroit, is currently serving 28 years in a federal prison in New Jersey after he was convicted in 2013 of 24 charges including extortion, mail fraud and tax violations. Kilpatrick, who maintains his innocence, requested a commutation from the White House after losing all appeals.

Schneider’s office vehemently disagrees with him getting pardoned – and promises to make his position clear if Trump asks for his opinion.

“My office is willing to provide any assistance to the Pardon Attorney to explain what really happened in Detroit under Mr. Kilpatrick’s watch, and why his conduct justified the sentence he received,” Schneider told the Free Press.

“As the elected mayor, he ran a criminal enterprise that corrupted wide swaths of city government in the early 2000s – at a time when city residents desperately needed honest and effective city services,” Schneider added.

“I’m going to continue to push. It’s not right,” Karmanos said during an appearance on the “No BS Newshour” podcast in January.

Karmanos said the president’s son-in-law, Jared Kushner, is handling commutation requests and that Trump is said to be considering it.

Unless the president intervenes, Kilpatrick, 49, is not eligible to be released until 2037.