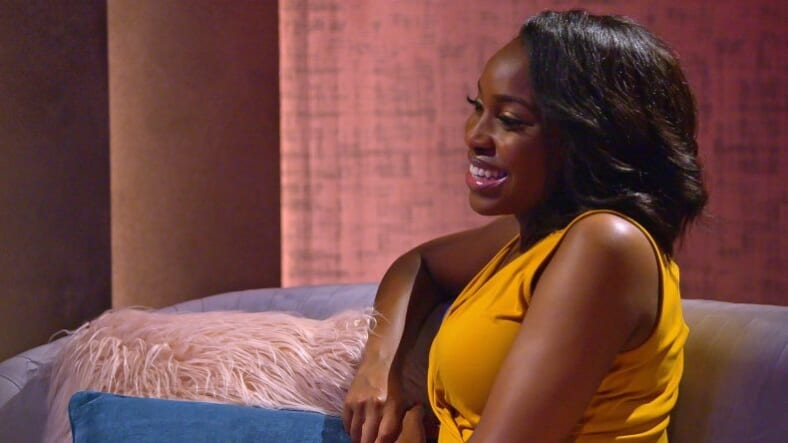 ***WARNING: This post contains MAJOR spoilers for Season 1 of Love Is Blind ***

If you’ve been living under a rock, you may not know that Netflix has a new hit on their hands with their “dating experiment” series Love Is Blind.

Fortunately, we haven’t been able to look away from the oddly addictive reality series that dares to ponder whether or not people can find and sustain a love not based on physical attraction.

Here are 5 reasons Love Is Blind is our new obsession:

Me: This show is trash
Also me:

The premise is pretty crazy. Single men and women talk to each other through “pods” separated by a thin wall and don’t get to see each other face to face until they’re engaged to be married to the stranger they’ve been chatting with through a wall for like 2-5 days. By the time they lay eyes on one another, they’re supposedly already deeply in love and committed to marriage. Next, the couples go on a romantic getaway to get to know each other before moving in together and planning their wedding that’s just three weeks away. You’ll keep telling yourself how ridiculous this is as you ignore your kids, your husband, your boss, the CDC, and anyone else who dares to distract you from this all-consuming series.

Amber basically told Jessica at the bachelorette party… “Bitch, I will CUT you” in a very sensitive heartfelt way #LoveIsBlind pic.twitter.com/S7bI6GQL6d

It’s messy AF. Since all of the singles start out by “speed-dating” each other, it’s only natural that some folks got pretty intimate in their conversations before finding their special someone. The result is that the newly-engaged couples ALL have some sort of history with their friends’ new fiances and they ALL have opinions about each other’s matches. Cue the drama when the walls come down and someone realizes that the person they passed up in the pods is super hot and dating one of your new homegirls that really ain’t sh*t.

Carlton had us screaming at the TV. In one of the most infuriating moments of the series, the only couple with two Black folks in it turns out to be a total mess. Carlton and Diamond seem like a match made in heaven until he reveals to his bride-to-be that he used to date men. Even though she’s completely shocked at the news, Diamond is willing to work things out after hearing his truth, but he’s such a douchebag that he gets angry with her for even questioning their relationship and ends up calling her a “b—ch” and proving that he’s nothing but a manipulative narcissist. He breaks her heart and has the nerve to act like the victim and we still can’t wait to see him in these streets. Matter of fact, there are a few folks on this show who could catch these hands but we won’t name names (Jessica and Kelly).

Lauren. There’s something so captivating about this 33-year-old content creator with a gorgeous smile and a heart of gold. We’re not sure if it’s her adorable haircut or her genuine desire to meet the man of her dreams that keep us in her corner, but this girl certainly has an “it” factor. She falls in love with a very tall white boy named Cameron who, while a little tiny bit dorky, is just as sweet as he can be. His love for Lauren never waivers and he’s not intimidated by the issues he and his wife-to-be may face as an interracial couple in Atlanta because his last serious relationship was with a Black woman and he’s ready for whatever comes. Lauren, on the other hand, is smitten with her new man while worried that his lack of melanin may prove too big an obstacle to overcome.

The ending is insane. It turns out, the finale episode that features the weddings of these couples was filmed over a year ago. Only two of the five couples actually tie the knot at their weddings. That means we get to watch three people get their hearts obliterated in front of their family and friends. Seriously, the suspense almost took us out and the blinding rage that filled our hearts when some of these fools flashed toothy grins seconds before stomping on their partner’s heart was epic. Fortunately, one of the happy couples still standing by the end of the finale is Cameron and Lauren. Otherwise, we’d have to call in sick for the rest of the year because our nerves are bad.

According to the show’s creator, Chris Coelen, BOTH of the couples who get hitched on the show’s finale are still together today, nearly 18 months after saying “I do.”

“I think that’s just a testament to the authenticity of the whole thing,” he told TheWrap. “They went through this process, built this relationship and put it to the test. It’s trial by fire and their relationships are forged incredibly strongly. I don’t see them ever slowing down.”

The Love Is Blind reunion hits Netflix on March 5.