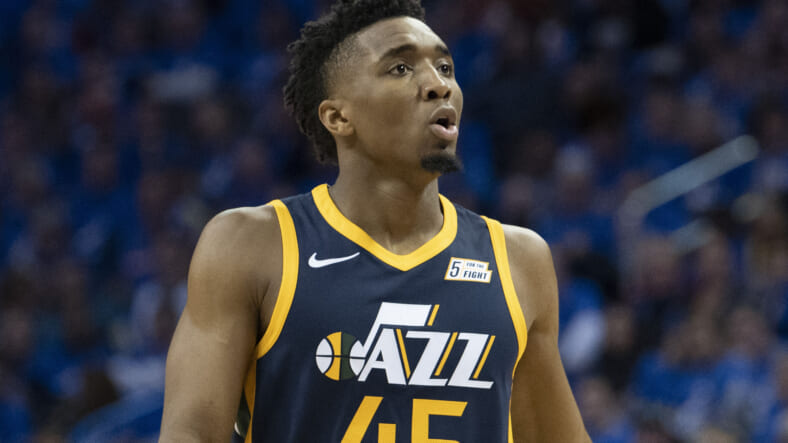 Donovan Mitchell #45 of the Utah Jazz watches game action against the Oklahoma City Thunder during the second half of Game One of the Western Conference in the 2018 NBA Playoffs at the Chesapeake Energy Arena on April 15, 2018 in Oklahoma City, Oklahoma. NOTE TO USER: User expressly acknowledges and agrees that, by downloading and or using this photograph, User is consenting to the terms and conditions of the Getty Images License Agreement. (Photo by J Pat Carter/Getty Images) *** Local Caption *** Donovan Mitchell;

Another Jazz player, Emmanuel Mudiay, was also reported as having flu-like symptoms, according to the Boston Globe.

“Jazz players privately say that Rudy Gobert had been careless in the locker room touching other players and their belongings. Now a Jazz teammate has tested positive,” Wojnarowski said in a tweet on Thursday morning.

Jazz star Donovan Mitchell has tested positive for the coronavirus, league sources tell ESPN. Jazz players privately say that Rudy Gobert had been careless in the locker room touching other players and their belongings. Now a Jazz teammate has tested positive.

Gobert became the first NBA player to test positive for coronavirus, ESPN reported Wednesday night. According to CBS Sports, Gobert jokingly touched every microphone on stage during a Monday press conference, seemingly to show his lack of fear of the virus that has since been declared a pandemic by the World Health Organization.

“A preliminary positive result came back right before tip-off of the Utah Jazz-Oklahoma City game. Subsequently, the decision was correctly made by the NBA to postpone the game,” the statement read. “The health and safety of our players, our organization, those throughout our league, and all those potentially impacted by this situation are paramount in our discussions.

The Utah Jazz with a statement pic.twitter.com/TxeRgfSODw

“We are working closely with the CDC, Oklahoma and Utah state officials and the NBA to determine how to best move forward as we gather more information,” the statement added.

“The individual is currently in the care of health officials in Oklahoma City. In coordination with the NBA and state officials, we will provide updates at the appropriate time.”

Jazz and Thunder players continued to be quarantined in the arena after Wednesday night’s game was postponed. Additionally, other teams that have played against the Jazz have been advised to self-quarantine.

The NBA season suspension comes after the coronavirus caused others to close its doors, including schools, festivals and nationally syndicated talk shows.