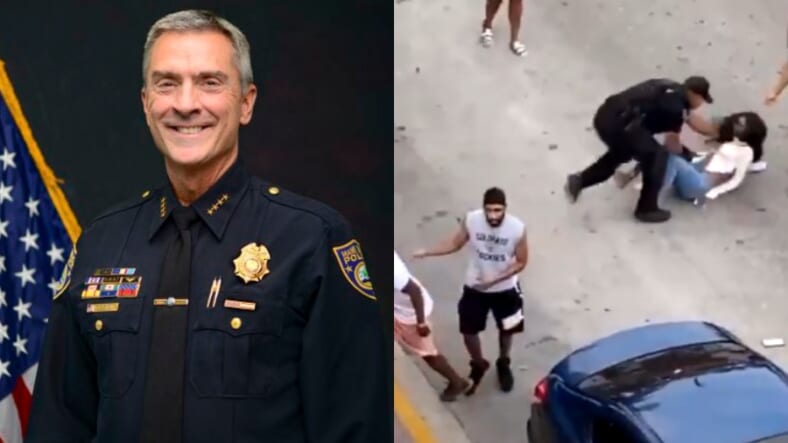 “Miami Beach is a destination city. It has high-impact weekends. During no other high-
impact weekend do you see police officers dressed in paramilitary gear with guns that shoot paintballs,” said Ruban Roberts, president of the Miami-Dade NAACP chapter, who called the officers’ tactics “racist” during a press conference on Friday.

“We have Super Bowl, we have [Gay] Pride, we have New Year’s. That never happens [during those weekends],” Roberts said.

On Sunday, the Miami-Dade NAACP Chapter escalated their demands, also calling for the resignation of Miami Beach’s City Manager, Jimmy Morales, and asking citizens to join in a social media campaign writing on Instagram:

A screenshot of a viral video shows a Miami Beach police officer choking a
young woman in the middle of Ocean Drive on Wednesday, March 11, 2020 as officers tried to
disperse a crowd following a fight.

On March 11, police reports show officers responded to a group of men involved in a fight
along Ocean Drive, the famous ocean-front strip in Miami Beach. In one video, captured by a spectator’s cell phone, an officer and a woman are running in the same direction and collided by accident into each other. The officer, who was chasing a male assailant, is seen in the video getting up, pushing the woman back to the ground, and then choking her with one hand.

“This is not consistent with the way police are trained to apprehend anyone that is a suspect,” Roberts told theGrio.

In a second viral video, stemming from the same incident, an officer is heard telling a young black man to “get the [explicative] out of here!” Three officers physically take him down to the ground while another cop fires a pellet gun to the ground to disperse the crowd.

We told the City of Miami Beach to put an end to the maltreatment of Black people and to stop the use of excessive force, last Friday. . . . They didn't listen. . . . Now, it's time we show the City of Miami Beach, we've had enough. It's time for collective action. ✊?✊? . . . Join in. Let's make changes together. Take part in the six step call to action. See flyer on ways to do so. . . . @themiamitimes @southfloridatimes @billycorben @theshaderoom @cbsmiami @thejilltraceyshow @robruban @supacindy @wsvn @daniella4change @blackaffairsadvisoryboard @sonnyredd1911 @dwightbullard_ @troubleman31 @shaunking #enough No more #policebrutality #MiamiDadeNAACP @miamibeachnews @miamibeachpd @changedotorg #SpringBreak2020 Time for change #MiamiBeach #WhenWeFightWeWin #WeAreTheNAACP

The Miami Beach Police Department provided theGrio with seven arrest reports related to this incident. The charges range from resisting arrest to disorderly conduct. One arrest report stated that a 23-year-old suspect’s behavior “created a danger for all officers involved due to the large size of the crowd that already gathered.” The man, who is Black, was taken to the ground by officers and arrested.

In another arrest report, an officer admitted hitting a 24-year-old Black man with “three to
four closed fist punches to the left rib area.” The defendant complained of injuries to his face and left side of ribs.

“If you come to Miami Beach to cause problems, we will intervene and take enforcement
action,” Miami Beach Police Chief, Richard Clements said in a statement.

Joining the NAACP, the Miami ACLU said it has been tracking the police tactics of Miami
Beach police as it relates to Black beach-goers for more than two decades. A spokeswoman
underscored a disproportionate pattern of aggression when it comes to African American crowds on the beach. As a result, they’re calling for the police department to be investigated.

The Miami-Dade chapter of the NAACP, led by president Ruban Roberts (center), holds a press conference on Friday, March 13, 2020, to denounce the aggressive arrests of black spring breakers in Miami Beach.

“That investigation is necessary. It is necessary for any police officer who loses his or her
cool and fails to follow the de-escalation tactics that they’re supposed to be trained in,” said Jeanne Baker, chair of Miami’s ACLU police Practices Committee. “But the officers in the video seem not to have absorbed that training. An investigation must be done.”

Civil rights advocates are calling for an independent citizen’s review panel in Miami-Dade
County that could investigate complaints against Miami Beach police. The City of Miami
already has a Civilian Investigative Panel in place; however, it only services Miami.

Advocates also want Miami Beach Police Chief Clements to hire additional black police officers and black officers in the command staff. They believe it would make a difference in how thousands of black visitors, who pump millions into the economy each year, are treated.

“This shows a short-sightedness on their part around the value of embracing the culture the way other cities like New Orleans does during the Essence festival and again during Mardi Gras.”

“No we do not believe that every police officer is bad because that is not what we stand for,” said attorney Rawsi Williams, a representative of the Miami NAACP. “But the bad apples, their worms are huge and they need to be dealt with.”