Black church in Harlem adapts with technology amid COVID-19 pandemic

As a pandemic continues to alter day-to-day lives, religious organizations have been forced to put their faith in social isolation

As the coronavirus pandemic continues to alter day-to-day lives, religious organizations have been forced to put their faith in social isolation.

To prevent COVID-19 from spreading and reaching vulnerable populations, gatherings and events across the globe have been suspended, postponed, or canceled indefinitely. Religious groups are not exempt from being encouraged to following procedures published by the Center for Disease Control and Prevention.

Now, some of the guidelines are law and actions such as gathering in groups of over 10 are temporarily banned in most states. While all churches are encouraged to close their doors, some may be harmed more than others. 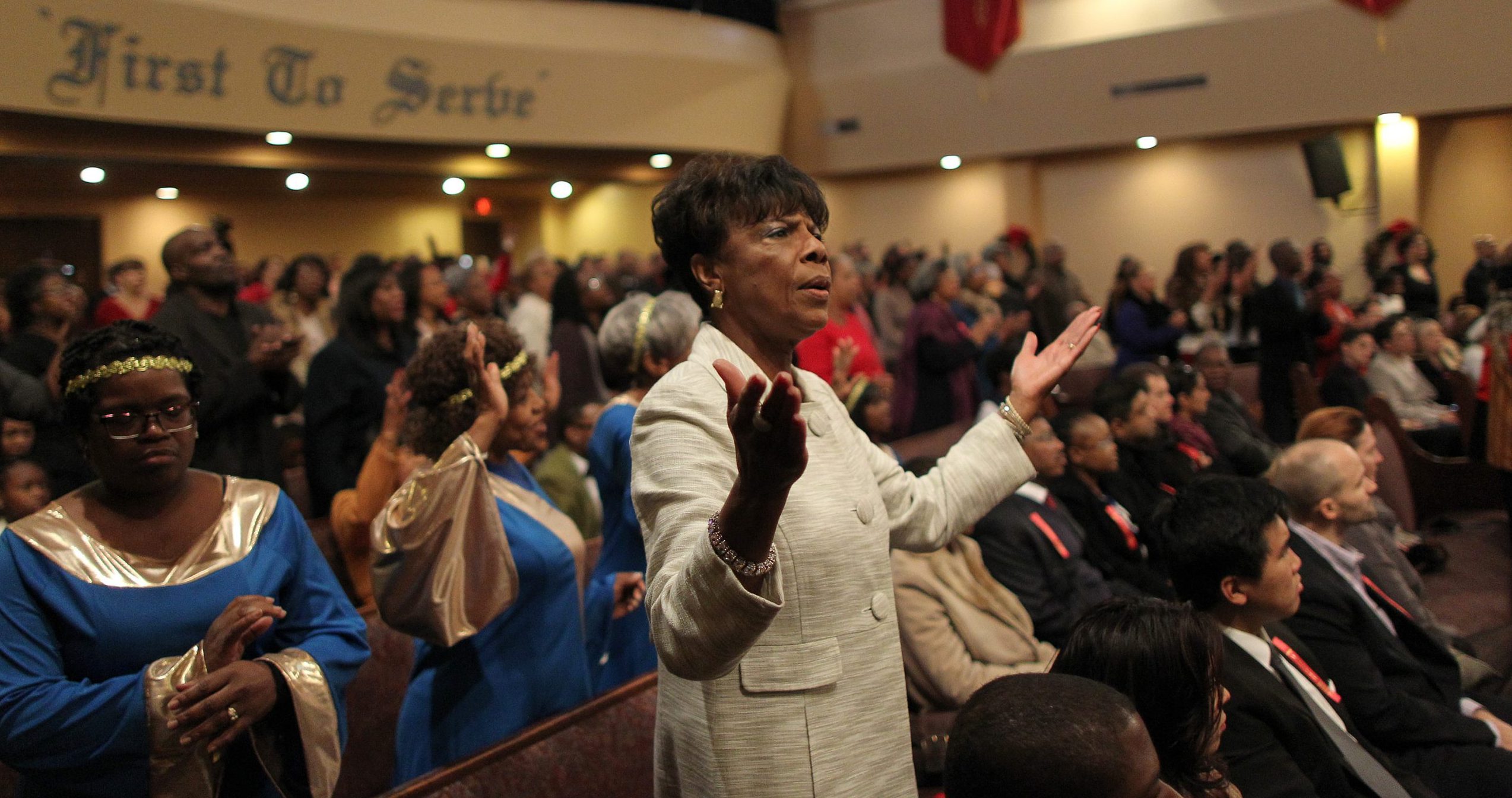 Congregation members worship at a service to honor the late South African President and anti-apartheid leader Nelson Mandela, at the First AME Church on December 8, 2013 in Los Angeles, California. First AME Church of Los Angeles was the first stop on Nelson Mandela’s visit to the U.S. after he was freed from prison. Mandela died on December 4 at the age of 95. (Photo by David McNew/Getty Images)

Modern churches are equipped with technology and have younger congregations to foster a digital presence, however, older and smaller churches are at a huge disadvantage that puts both the safety of the community and their existence at risk. Black churches, which have historical significance to the community, are specifically facing a set of challenges brought on by the pandemic that may not have ideal solutions.

READ MORE: How HBCUs are handling the coronavirus pandemic

The guidelines issued by President Donald Trump to avoid gatherings of more than 10 people to stop the spread of the novel coronavirus has put some churches in a vulnerable position.

“Tragically churches may have to close their doors because of the pandemic,” Pastor Mike Walrond of Harlem’s First Corinthian Baptist Church tells theGrio.

FEAR HAS 2 MEANINGS! Will you forget everything and run, or face everything and rise? Tune in on Sunday’s for our Digital Worship Experience at 10:45AM on www.fcbcnyc.tv. Tag a friend, and share this clip! Drop a comment below if this quote impacted your life! ???? Be sure to follow this ‘official page’ and turn on notifications for @mikewalrond for more videos like this!

Church service was canceled for Pastor Walrod’s congregation, however with a fairly young membership, not much has changed. The demographics of First Corinthian Baptist Church are made up of mostly millennials, followed by Generation X and baby boomers. According to Pastor Walrond, most of his congregation is aged 18-50, which is not the norm in most churches.

There’s no one way to take this journey with God. Yet, what you discover along the way will indeed make the journey paramount. ? We’re excited for you to experience ALL IN Sunday tomorrow – it’s definitely one to remember. ___ #fcbcharlem #fcbcnyc #fcbcallin

In fact, First Corinthian, affectionately known as FCBC by its congregants, has offered a digital service and fellowship for the past few years. Pastor Walrond says approximately 65-70% of his church’s giving was already digital, which may not be the truth for other congregations.

“Part of the reason we’ve been digitally engaged: the people who run media and are (reimagining the church) are under thirty,” says Pastor Walrod.

READ MORE: Should Black America be worried about Coronavirus?

“I often think of those churches that don’t have a strong digital engagement or live stream. The average congregation is 75 to 100 people and many are struggling if they miss one Sunday nevertheless a couple of weeks or months,” he continues.

As far as the digital debate between the faithful and the factual, Pastor Walrod connects the two sides, encouraging churches to shut their doors until the pandemic deescalates.

“I think churches should be canceled. It’s not about the well being of that faith-based institution. It’s about the safety of the community,” he says.

“We are part of the community. I don’t negate any faith but at the same time I also realize we must be good stewards of the community and that means being mindful and adhering to some of the limitations”