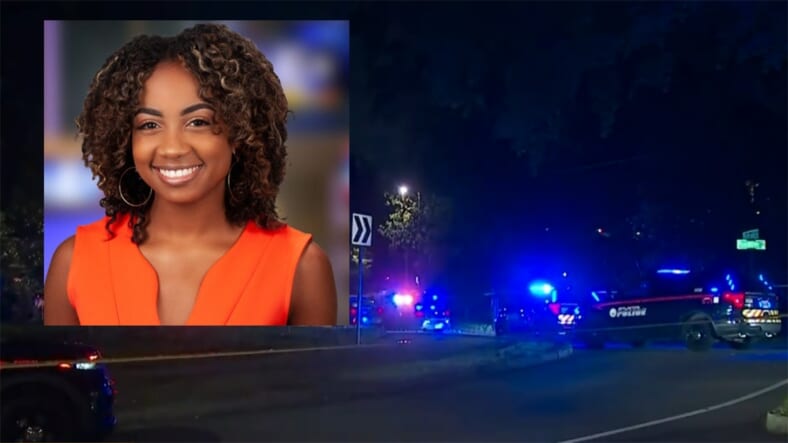 A TV news van carrying a pregnant, Atlanta TV journalist was carjacked early Tuesday morning by another pregnant woman, while the journalist was still inside the van.

Iyani Hughes, a journalist with CBS, had just finished an on-air broadcast and had gone back to the news vehicle to edit her video. She had turned on the engine so she could power her computer and was attempting to lock the door of the vehicle when Seniqua Lunsford allegedly busted in, got into the driver’s seat and sped off with Hughes still inside, according to CBS 46.

Lunsford was reportedly running from police, who were in the area responding to a crash that Lunsford allegedly caused.

Karyn Greer, Hughes’ newscast anchor, said she heard her scream as the news vehicle was being driven away.

“It is frightening when you become the news story as a journalist,” Greer told Huff Post. “I could hear in my ear because they realized in master control that something was going on so they were rolling on it and I could hear (Hughes) scream and I could hear Jeff, our photographer, yelling somebody just drove off in our car.”

Steve Avery, the spokesman for Atlanta police, said Hughes had attempted to make Lunsford pull over the vehicle but when she refused, Hughes put on her seat belt. Police chased the vehicle from Atlantic Station down to Peachtree Circle.

Hughes was treated and released from a hospital. In a Facebook post, Greer said she had spoken to Hughes who was shaken up by the incident, but that she was otherwise okay.

CBS46's Karyn Greer gives an update on CBS46's Iyani Hughes who was in a van that was stolen by a woman being investigated for an earlier crash nearby. More details can be found here: https://www.cbs46.com/news/cbs46-reporter-okay-after-news-van-stolen-with-her-inside-in-downtown-atlanta/article_1000b8dc-7e59-11ea-a275-ffb261a43d35.html

Lunsford was reportedly treated for an arm injury, before she was booked at the local detention center on kidnapping charges, according to CBS 46.