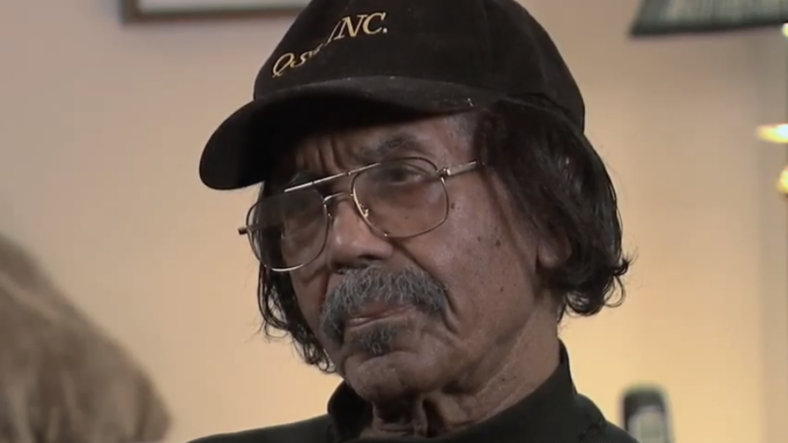 Harvey Zeigler, 100, is the grandson of a man who escaped slavery in Orangeburg, South Carolina in the 1850s through the Underground Railroad.

That man, Doc Zeigler, a musician, would ultimately settle near a small, rural, unincorporated town in Montgomery County, Maryland called Damascus, named after the capital city in Syria.

Damascus was also the town where Zeigler’s great-grandfather, Richard Holsey, was gifted a parcel of land that was once a slave plantation, known as the Mullinix Plantation after he was identified in the 1850 Census as the family of free slaves on the homestead.

READ MORE: Ben Carson on slavery reparations: ‘No one is ever going to be able to work that out’

The old Mullinix slave Plantation became Holsey Road, and nearly two dozen free slaves — including Zeigler’s great grandparents, uncles, and aunts, as well as other descendants of slaves – settled on the road where they thrived, even in hard times.

“Holsey Road was a Christian community. The best kind of community,” Zeigler said. “The people worked hard in the trades — carpenters, brick masons. It was between poverty and middle class. It was oatmeal, cornmeal, missed meal or no meal during my time.”

“Most of the people who lived here were farmers,” Zeigler added. “My father was a musician and worked on a farm. My mother was a domestic.”

Recently, Zeigler, a former youth organizer with the Montgomery County chapter of the NAACP, discussed what life was like growing up amongst free Blacks on Holsey Road, how gentrification changed the demographics of the road and the town, and how race continues to shape almost every aspect in America.

Just like the rest of Montgomery County, Damascus was segregated in the 1920s and 1930s when Zeigler grew up. Holsey Road became their refuge: the place where they were nurtured and sustained by their people.

As a young man, Zeigler, who was the 6th of 13 children born to Ellsworth and Bertha Lyles, said he started working early in the community. “During the summer, I would cut the people’s grass. I did a lot of work in the community. I had a reputation for being a Good Samaritan,” he said.

Today, much has changed on Holsey Road. Zeigler and one other family are the only Black people who remain. “That’s the sad part about it,” Zeigler said.

In recent years, Black enclaves in Montgomery County like Holsey Road were gentrified, as people continue to flock to the county for its good schools and property values.

“I feel a little depressed (but) you can’t beat progress,” Zeigler said recently. “You’ve got to take the good with the bad with progress.”

After he graduated from the all-Black Lincoln High School in Rockville, Md., Zeigler was drafted in the U.S. Army and became part of the 329th segregated unit during World War II.

“We would guard the ammunition, equipment, food, and gas,” Zeigler said. Zeigler worked as a private first class in a Black unit and said he guarded supplies that soldiers needed while fighting on the front lines of Europe.

When he came back to Maryland after his military service was over, Zeigler married and settled down on Holsey Road just like his parents had. He bought a house right next to his sister, Inez Macabee, who is now deceased. Macabee’s home was built by slaves and is on Maryland’s historic registry.

Zeigler said the area had so much African American history, it just felt right to keep his roots firmly planted, even if Jim Crow still persisted at that time in Montgomery County.

Growing up in Damascus and coming of age in the early to mid-20th Century, Zeigler said he remembered the time when Blacks were openly discriminated against and lived in segregated communities.

“I couldn’t go to lunchrooms, swimming pools, churches, schools. I couldn’t go anyplace in 1966,” Zeigler said. “We took a lot of beatings, Afro-Americans, back in that time.”

When Zeigler and a cousin hoped to open a trucking company in the late 1940s but couldn’t get bank financing, Zeigler accused the bank of discriminatory lending practices. A decade later, when he was passed over for promotions at the Atomic Energy Commission, he solicited the NAACP’s help and filed a complaint against the AEC.

Times have changed for certain, but Zeigler said he still sees some negative remnants of racial discrimination in America. He also thinks in some ways we are moving in reverse.

“I think we’re taking a step backward, a big step,” Zeigler said about President Donald Trump. “All the things we did accomplish, he’s trying to undo.”

He is also frustrated at the cavalier attitude some young Black people have towards voting.

“These youngsters, when you talk to them and they tell you ‘my vote don’t matter,’” Zeigler’s voice trails off. “I can’t deal with some of it.”

“I talked to a guy the other day and he said everything he got, he got on his own,” Zeigler said. “He said he made straight A’s at Seneca Valley and I asked him how do you think you got into Seneca Valley. He said he walked in it.”

Zeigler said some young Black people even tell him they no longer see a need for the NAACP.

“They say, we don’t need the NAACP, we’ve got it good. We don’t have no problems. If you talk to the youngsters, you’ll hear them say this,” he said.

When asked how that sentiment makes him feel, Zeigler doesn’t mince words.

“Like my life was just destroyed. All that work, all that beating, police poking you with the bully sticks,” for nothing, he said.

Zeigler doesn’t blame the children entirely. He said Black history is no longer taught in the schools, like when he attended all-Black schools.

“When I was going to high school, they would teach Black history for a semester. Now they can’t even get it into the curriculum,” Zeigler said.

So Zeigler fought to create a Black museum.

Warren Fleming, Zeigler’s nephew, said his uncle has always used his voice and his actions to help Black people attain civil rights and continues to do so now whenever he can. Fleming heads up the Damascus Connections Committee, a nonprofit that preserves African-American culture in the community.

READ MORE: Wake Forest apologizes for slavery in university’s past

“We began to utilize our strength. My uncle wanted a Black museum,” Fleming said.

Soon, white organizations wanted to join in a partnership with Zeigler to ensure a Black museum came to fruition. The Montgomery County School System donated a trailer and the committee turned it into the Damascus Heritage Museum, which is dedicated to telling African-American history.

“My uncle was always about unity in the community,” Fleming said.