In ‘Becoming,’ a starring role for Michelle Obama

'My life is starting to be mine again, the former first lady says in the film. 'There’s another chapter waiting for me out there.'

NEW YORK (AP) — In the backstage hallways of Washington D.C.’s Capital One Arena, Michelle Obama walks arm-in-arm with her husband, Barack Obama. She has just finished the third stop on what would be a 34-city book tour of such unprecedented scale that it almost resembled a Beyoncé concert tour.

Nadia Hallgren’s camera is trailing them when Michelle Obama, perhaps looking for reassurance, asks the former president: “Does it seem like a show that you’d like to see?”

Hallgren’s documentary, “Becoming,” is — more so than we’ve seen before — the Michelle Obama Show. It captures the former first lady, in settings both public and intimate, navigating her post-White House life, interacting with fans and generally fostering a spirit of positivity, self-belief and hope that few beside her husband are capable of inspiring.

“My life is starting to be mine again,” she says in the film. “There’s another chapter waiting for me out there.”

“Becoming,” which debuts Wednesday on Netflix, is an extension of her 2018 best-selling memoir of the same name and a kind of authorized filmic portrait of Obama. It’s produced by Higher Ground Productions, the film company founded by the Obamas.

Before now, Higher Ground has backed well-received, socially-minded documentaries about American labor (the Oscar-winning “American Factory” ) and the disability rights movement (the acclaimed Sundance-winner “Crip Camp: A Disability Revolution” ). It’s been an auspicious, award-winning beginning for Higher Ground, the most ambitious post-White House dive into Hollywood of any former U.S. president. With “Becoming,” one half of Higher Ground now steps in front of the camera, too. 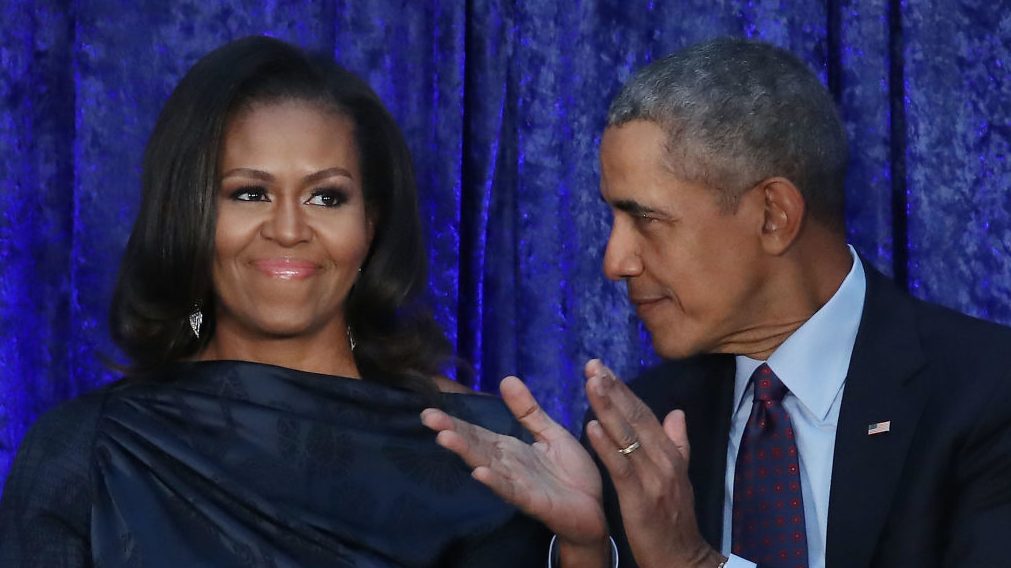 Former U.S. President Barack Obama and first lady Michelle Obama participate in the unveiling of their official portraits during a ceremony at the Smithsonian’s National Portrait Gallery, on February 12, 2018 in Washington, DC. The portraits were commissioned by the Gallery, for Kehinde Wiley to create President Obama’s portrait, and Amy Sherald that of Michelle Obama. (Photo by Mark Wilson/Getty Images)

The movie, itself, was a secret until last week when Netflix announced is upcoming premiere. Hallgren typically worked with small crews or just by herself. Much of “Becoming” takes place either in arenas crowded with cameras or in private settings — the back seat of an SUV, the childhood home of Obama — so few would have spotted her.

“I think if people saw me, it probably looked very unofficial,” chuckles Hallgren.

Keeping “Becoming” clandestine still wasn’t easy, though. “My closest friends had no idea what I was doing,” Hallgren says. “People were always like, ‘What are you up to?’”

Hallgren is a veteran documentary cinematographer (“Trouble the Water,” “Girl Rising,” “Trapped”) making her feature directorial debut. (She also worked on CNN Films’ “We Will Rise: Michelle Obama’s Mission to Educate Girls Around the World.”) The job, Hallgren believes, she won from her body of work and, as first gleaned in a high-pressure meeting with Obama, their similarities. “She’s from the South Side. I’m from the South Bronx,” says the New York-bred filmmaker.

Unlike the interview-heavy Hulu doc-series “Hillary” on Hillary Clinton, Hallgren’s approach is mostly fly-on-the-wall, mixing glossy onstage footage of Obama’s talks with the likes of Oprah Winfrey, Reese Witherspoon and Stephen Colbert with more personal scenes offstage. Obama reflects on her eight years in the White House and the often racist-tinged response they engendered. “You hope people were more ready for us than maybe they were,” she says.

Obama doesn’t analyze the 2016 election or the rise of Donald Trump except for one comment lamenting the turnout of African American voters. “That’s my trauma,” she says. 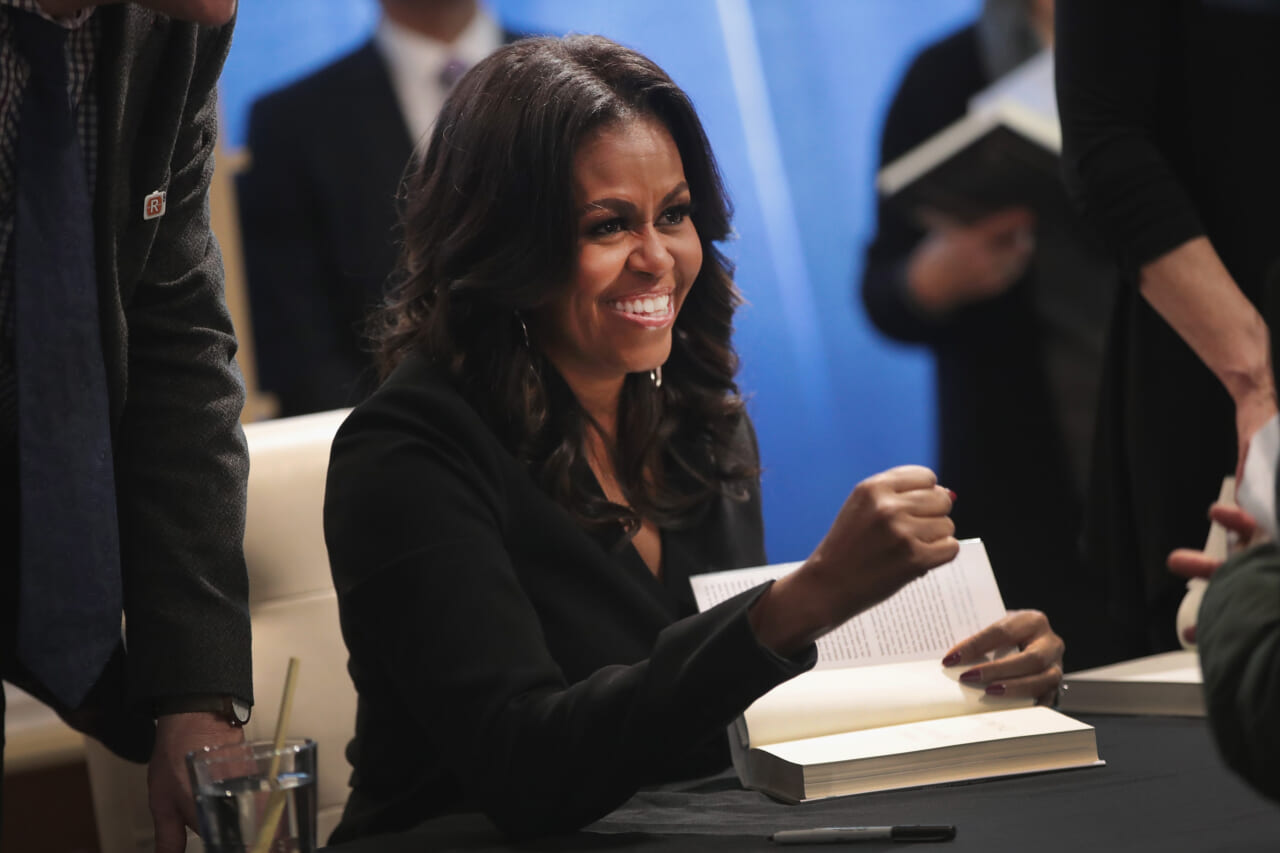 Former first lady Michelle Obama kicks off her Becoming book tour with a signing at the Seminary Co-op bookstore on November 13, 2018 in Chicago, Illinois. (Photo by Scott Olson/Getty Images)

But the main trust of “Becoming” is not just Obama’s story but what she inspires — how one story begets others. Hallgren, drawing from the photography of Garry Winogrand, lingers on the faces in Obama’s crowds, and in some cases takes a moment to follow their lives. “Becoming” may be part concert film but it’s nearly as interested in the audience as it is in the showstopper on stage.

“Oftentimes when Mrs. Obama was on stage, I was not the main camera filming her,” says Hallgren. “So I had the opportunity to walk around. There was such an incredible energy in those arenas. The excitement that people had felt special. I thought: I want to capture this.”

The timing of “Becoming” is interesting not just because it captures a sense of community before people were forced into lockdown by the pandemic but because it comes in the middle of the presidential campaign. The Deadline review of the film isn’t alone in maintaining: “If Michelle Obama wasn’t so adamant that she isn’t running for public office, the perfectly timed new Netflix documentary ‘Becoming’ would sure seem like a campaign launch.”

Michelle Obama, however, has steadfastly maintained she’s not a political figure and hasn’t before officially endorsed a candidate. (Barack Obama recently endorsed his former vice president, Joe Biden.) But many have advocated for her to play a role in the 2020 election. The committee “Draft Michelle Obama” launched Monday, urging Biden choose her as his running mate.

Michelle Obama decline to be interviewed for this article but she released a statement when “Becoming” was announced.

“Even as we can no longer safely gather or feed off the energy of groups, even as many of us are living with grief, loneliness and fear, we need to stay open and able to put ourselves in other people’s shoes. Empathy is our lifeline here. It’s what will get us to the other side,” said Obama. “Let’s use it to redirect our attention toward what matters most, reconsider our priorities, and find ways to better remake the world in the image of our hopes.”