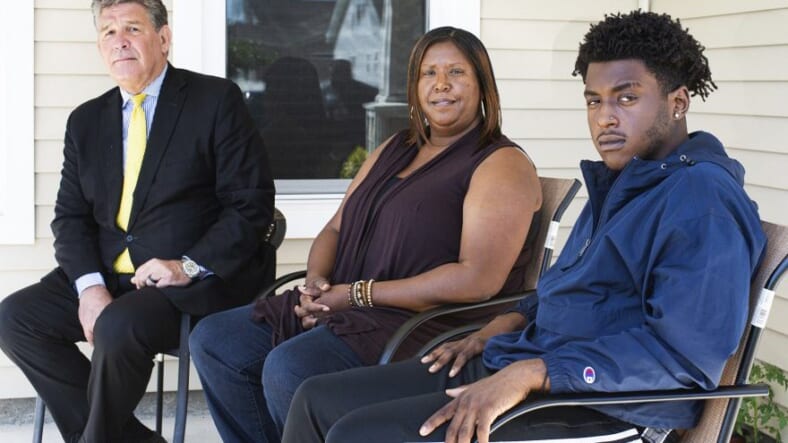 Dameon Shepard, right, his mother, Monica Shepard, and their attorney Jim Lea, left, pose for a photo at the Shepard’s home in the Rocky Point area of Pender County, in North Carolina. (Mark Darrough/Port City Daily via AP)

A sheriff’s deputy in southern North Carolina is facing charges after leading a throng of armed white people to the home of a Black teenager last week in a case of mistaken identity.

Jordan Kita, who was a detention officer in the New Hanover County Sheriff’s Office at the time of the incident, is said to have led the charge of a large group on May 3 in bordering Pender County to confront Dameon Shepard, a high school senior at Laney High School in Wilmington, N.C., over a missing girl.

A girl that Shepard does not know, the News & Observer reports. The missing girl, 15-year-old Lekayda Kempisty, has since been found safe. Kita and the vigilantes were looking for someone named Josiah.

Shepard was playing video games at home when he answered the door that Sunday and was met by the Kita clan. When the teenager tried to close the door, Kita, armed with an assault rifle, reportedly put his foot in the way.

Shepard pleaded with Kita and the mob, explaining that Josiah had previously lived next door. The situation frightened the son and awoke his mother, Monica Shepard, who told the crowd to leave.

The Shepards are one of only two Black families living in the neighborhood, according to the Port City Daily.

“What if he was the person they were looking for or what if I was not home? What would’ve happened,” Monica Shepard said in an interview with local TV station WECT. “I don’t want to have that conversation. I don’t want him to be a statistic. It’s scary.”

Kita has since been fired.

He stated in a press conference that Kita is accused of going to the Shepard’s home “while armed and in uniform in a county where he was not duly sworn in and in furtherance of personal — not law enforcement — purposes.”

The Shepards are also preparing to file a civil suit, which is being prepped by James W. Lea.