Ahmaud Arbery: Owner of construction property says he was not robbed

Larry English says he had hoped to move in the house after retirement, but will not because of death threats following Arbery's murder 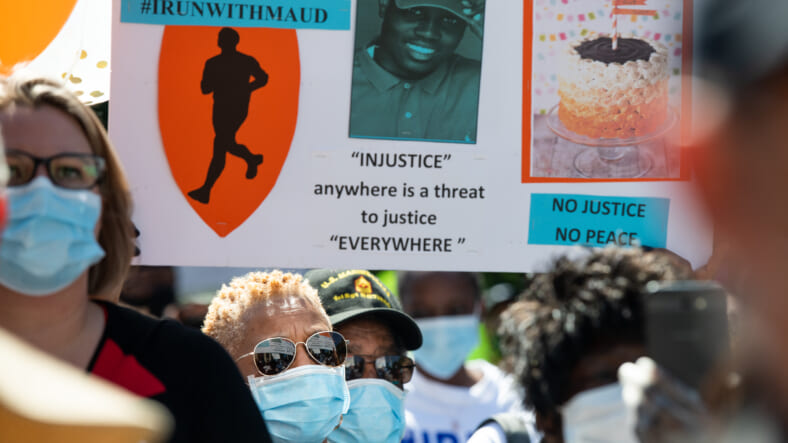 Demonstrators protest the shooting death of Ahmaud Arbery at the Glynn County Courthouse on May 8, 2020 in Brunswick, Georgia. Gregory McMichael and Travis McMichael were arrested the previous night and charged with murder. (Photo by Sean Rayford/Getty Images)

Central to the shooting death of Ahmaud Arbery has been the idea that the young man was a suspect in a string of robberies. However, police have refuted that claim as there were no thefts in the Brunswick, GA neighborhood in the weeks leading up to the slaying.

Now, the owner of the house that Arbery was seen inside has spoken out saying that his property was not robbed. Previously, there was confusion around whether or not the young went into the house or only looked in the window. According to reports, it has been determined that he did enter into the house.

Larry English, the man who owns the house under construction, told The Washington Post that the structure was not robbed.

“That’s completely wrong. I’ve never had a police report or anything stolen from my property, or any kind of robbery,” he said.

The waterfront house was supposed to be a retirement home for English and his wife but now says that he will probably never live on the property. He claims that he has been receiving death threats, and his wife is afraid to ever move in.

According to the Atlanta Journal-Constitution, the Georgia Bureau of Investigation is in possession of surveillance video that shows Arbery inside the home which was open. “We are using video to put the timeline together to fill in the blanks of what happened that afternoon,” said Scott Dutton, GBI’s Deputy Director of investigations.

The video shows a man wearing a white shirt and shorts, who appears to be Arbery, walking down Satilla Drive on Feb 23. After the man enters the construction property, another man appears near a stand of trees across the street from the site and appears to be observing him.

READ MORE: Ahmaud Arbery footage of fatal shooting was leaked by a lawyer connected to the suspects

A minute later, after a car passes, a figure that appears to be Arbery comes out of the front door of the house and runs down the road. Less than five minutes later, he would be dead.

Attorneys for Arbery’s family have repeatedly said that “Ahmaud Arbery did not take part in any felony, had no illegal substances in his system, was not armed yet was shot three times with a shotgun at close range.”