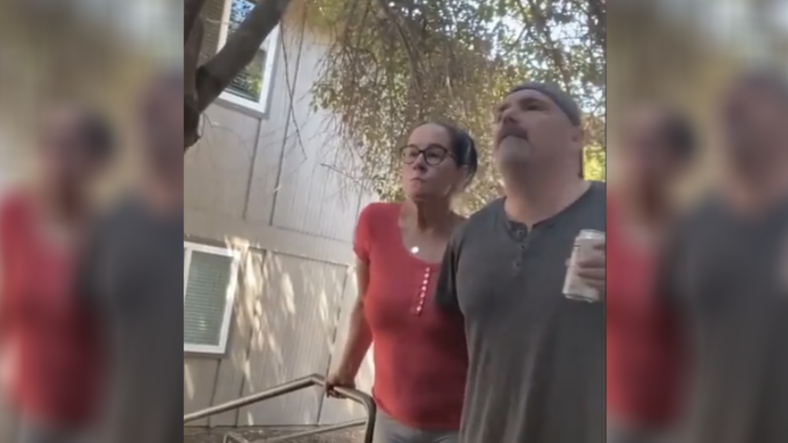 An associate professor at Sacramento State University is apologizing for the outrageously racist behavior he and his wife displayed on a video shared by their neighbor, Mikaela Cobb, that has now gone viral.

Tim Ford and his wife, Crystal Ford, are attributing the racist rant to her struggles with drug and alcohol addiction, further exacerbated by the coronavirus pandemic.

“She recognizes the hurt and anger that she has caused and regrets it,” Ford said of his wife to the Sacramento Bee. “Today, she is seeking help and has checked herself into a hospital for alcohol and drug abuse.”

In the video, Sacramento State economics professor Ford and his wife, Crystal, are seen in a verbal dispute with their neighbors. Crystal Ford uses racial slurs multiple times, refers to the person recording as a “b*tch” and flips off the camera.

At the end of the video, Ford tosses his drink and its contents at his neighbors’ window.

Sacramento State President Robert S. Nelsen said that he received and watched the “very disturbing video” that showed the professor and his wife in “an ugly verbal dispute with their neighbors.”

Nelsen denounced the video on Sacramento State’s official Facebook page, saying, “I am deeply offended by the language in the video. Racial epithets are repulsive and unacceptable. Personally, I am incredibly upset by the contents of the video and the harmful impact that it is having on our campus community.”

For her part, Cobb says the argument started because Crystal Ford was mad about the smell of bacon grease. “Guys she was mad it smelled like bacon grease!? Like I can’t eat!?” Cobb wrote in a Facebook comment.

Cobb’s post has since been deleted but according to an article in The State Hornet, known as the “Voice of Sacramento”, she stated, “This is what I have to deal with while in quarantine!” Mikaela Cobb said in the post. “Racial slurs are being thrown around, I can’t even (be) at peace in my own home.”