The first daughter, Chiara, used the Gracie Mansion as her address while being booked and fingerprinted 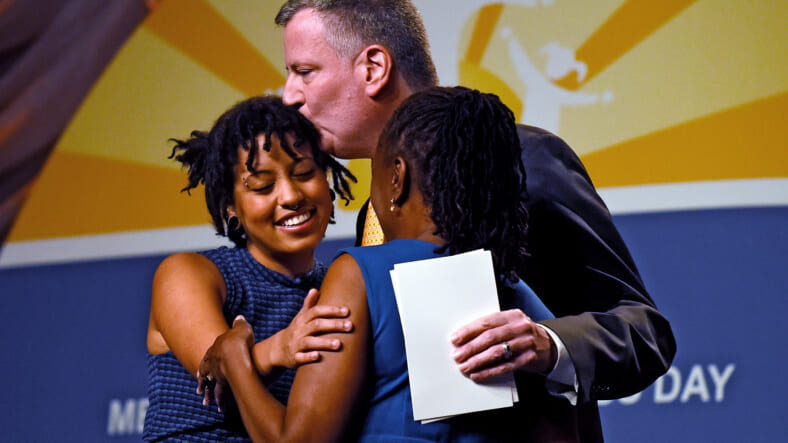 Chiara de Blasio was among 100 protesters who were arrested Saturday night in New York City. The daughter of Mayor Bill de Blasio was reportedly part of a group that was blocking a roadway, and some people were allegedly throwing objects at officers.

According to the New York Post, when asked her address she listed Gracie Mansion, the Mayoral residence, but did not explicitly tell police officers who she was. She was held overnight and given a desk appearance ticket.

“That was a real hotspot, police cars were getting burned there, people were throwing and yelling, fighting with cops,” a source told The Post, “There were thousands of people in that area at that time.”

de Blasio was arrested just an hour before her father made a public announcement pleading for protesters to go home just before midnight.

The First Daughter, Chiara de Blasio was arrested near the intersection of 12th Street and Broadway along with approximately 100 other people who were instructed to clear the roadway but refused.

“If you went out peacefully to make a point about the need for change, you have been heard and change is coming in the city,” the mayor said, “I have no doubt about that. It’s time to go home so we can all move forward.”

On Sunday, the mayor, like many other government officials around the country, stated that the local protests had been co-opted by agitators with an “explicit agenda of violence.”

He warned that even though it is a small number of people, they are well-organized.

“Some come from outside of the cities. Some are from inside the city,” de Blasio said, “Some are from the neighborhoods where the protests take place. Some are not.”

Chiara de Blasio and her brother Dante de Blasio are the two children of the mayor and his wife, Chirlane McCray-who is Black. Chiara graduated in 2016 from Santa Clara University in 2016 with a degree in social work. She has been open about her past battles with drug and alcohol addiction and has worked to help other addicts with New York’s Health and Human Services Department.