It was a jarring scene as police in the nation’s capital forcefully cleared young men and women gathered legally in a public park, all of it on live television.

WASHINGTON (AP) — It began with Attorney General Bill Barr standing with his hands casually in his pockets, not wearing a tie, surveying the scene at Lafayette Park across from the White House, where several thousand protesters had gathered for more demonstrations after the police killing of George Floyd.

President Donald Trump had announced he would soon be addressing the nation from the White House Rose Garden, as a 7 p.m. curfew in the city loomed and a mass of law enforcement, including U.S. Secret Service agents, Park Police and National Guardsmen, stood sentry, many dressed in riot gear.

Moments before 6:30 p.m., just when Trump said he would begin his address, the officers suddenly marched forward, directly confronting the protesters as many held up their hands, saying, “Don’t shoot.”

Soon, law enforcement officers were aggressively forcing the protesters back, firing tear gas and deploying flash bangs into the crowd to disperse them from the park for seemingly no reason. It was a jarring scene as police in the nation’s capital forcefully cleared young men and women gathered legally in a public park on a sunny evening, all of it on live television.

With smoke still wafting and isolated tussles continuing in the crowd, Trump emerged in the Rose Garden for a dramatic split-screen of his own creation.

“I am your president of law and order and an ally of all peaceful protesters,” he declared, before demanding that governors across the nation deploy the National Guard “in sufficient numbers that we dominate the streets.” And he warned that, if they refused, he would deploy the United States military “and quickly solve the problem for them.” 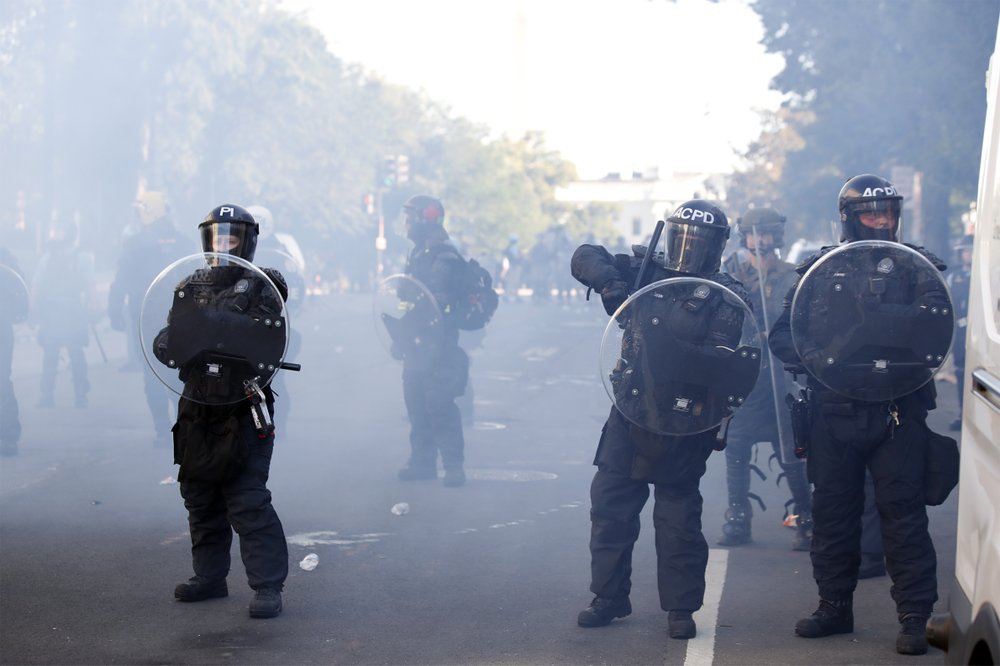 Police clear demonstrators from Lafayette Park as they protest the death of George Floyd, Monday, June 1, 2020, in Washington. Floyd died after being restrained by Minneapolis police officers. (AP Photo/Alex Brandon)

As an additional show of force, Trump announced he was deploying even more of the military to Washington, D.C., giving it the feel of an armed, locked-down city after days of violent clashes, arson and looting.

“As we speak I am dispatching thousands and thousands of heavily armed soldiers,” he said, as explosions rang out in the background. “We are putting everybody on warning.”

Then, before departing, Trump announced he wasn’t done for the evening, and would be “going to pay my respects to a very very special place.”

Moments later, the White House press pool was quickly summoned for a surprise movement. And soon after, Trump strolled out of the White House gates — something he had never done before — and walked across the park that had just been cleared to accommodate his movements.

Trump walked slowly, followed by an entourage of his most senior aides, security and reporters. The faint residue of pepper spray hung in the air, stinging eyes and prompting coughing.

Sections of the park and surrounding sidewalks were strewn with garbage, including plastic water bottles and other debris. Some sections had been scrawled with graffiti.

Trump crossed H Street and walked toward St. John’s Church, the landmark pale yellow building where every president, including Trump, has prayed. It had been damaged Sunday night in a protest fire.

Trump, standing alone in front of cameras, then raised a black-covered Bible for reporters to see.

“We have a great country,” Trump said. “Greatest country in the world.” 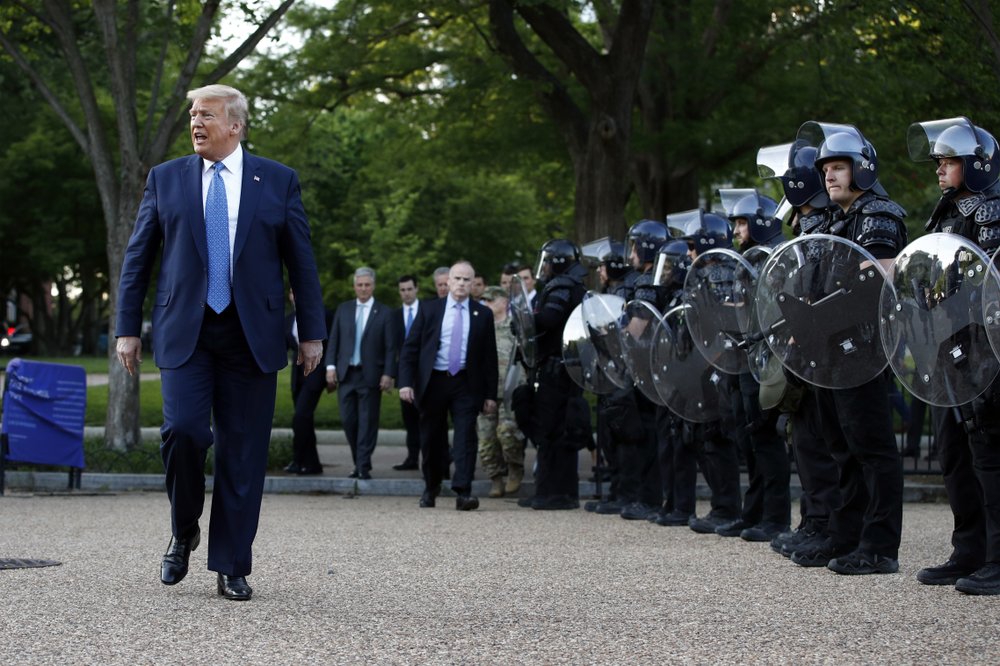 President Donald Trump walks past police in Lafayette Park after he visited outside St. John’s Church across from the White House Monday, June 1, 2020, in Washington. Part of the church was set on fire during protests on Sunday night. (AP Photo/Patrick Semansky)

He didn’t talk about Floyd, the church or the damage it had suffered, or the peaceful protesters police had cleared. He said nothing about the coronavirus pandemic, the parallel crisis that has continued to ravage the nation as Trump campaigns for a second presidential term. And then he invited his attorney general, national security adviser, chief of staff, press secretary and defense secretary — all white — to join him for another round of photos before he walked back across the park to the White House.

At one point, he stopped and pumped his fist in the air at National Guard members in the distance.

“We’re going to keep it nice and safe,” he said.

Rabbi Jack Moline, the president of Interfaith Alliance, slammed the fact that peaceful protesters near the White House were gassed and shot with rubber bullets so Trump could hold his photo op.

“Seeing President Trump stand in front of St. John’s Episcopal Church while holding a Bible in response to calls for racial justice — right after using military force to clear peaceful protesters out of the area — is one of the most flagrant misuses of religion I have ever seen,” Moline said in a statement. This only underscores the president’s complete lack of compassion for Black Americans and the lethal consequences of racism.”

And the Right Rev. Mariann Budde, bishop of the Episcopal Diocese of Washington, to which St. John’s belongs, said she was “outraged” by the moment and noted that Trump didn’t pray during his visit.

“He took the symbols sacred to our tradition and stood in front of a house of prayer in full expectation that would be a celebratory moment,” Budde told The Associated Press. “There was nothing I could do but speak out against that.”