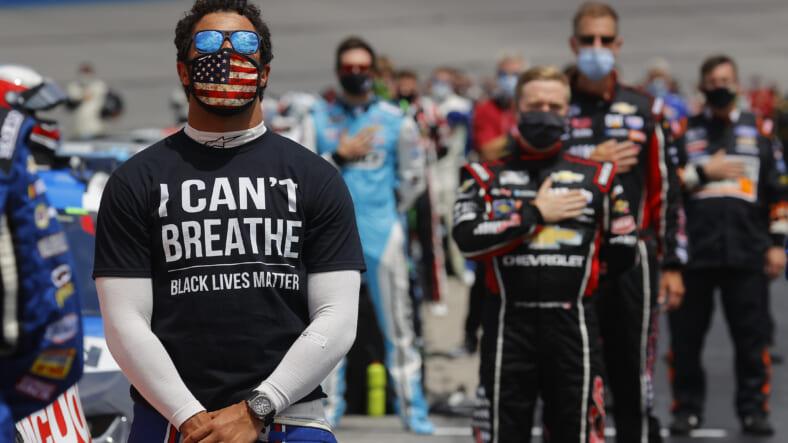 Bubba Wallace stands during the national anthem prior to the NASCAR Cup Series Folds of Honor QuikTrip 500 at Atlanta Motor Speedway on June 07, 2020 in Hampton, Georgia. (Photo by Chris Graythen/Getty Images)

As corporations all over America openly support the Black Lives Matter movement in the protests after the killing of George Floyd by Minneapolis police, sports leagues rushed to do the same.

The NFL, after rejecting Colin Kaepernick’s peaceful anthem protest and effectively barring him from the league, released a video with commissioner Roger Goodell saying they were wrong.

But if there was one sports league you might not have expected to join in, it was NASCAR, the governing body of stock car racing. Their fan base is 94% white and there is only one African-American driver, Bubba Wallace, among its top stars. 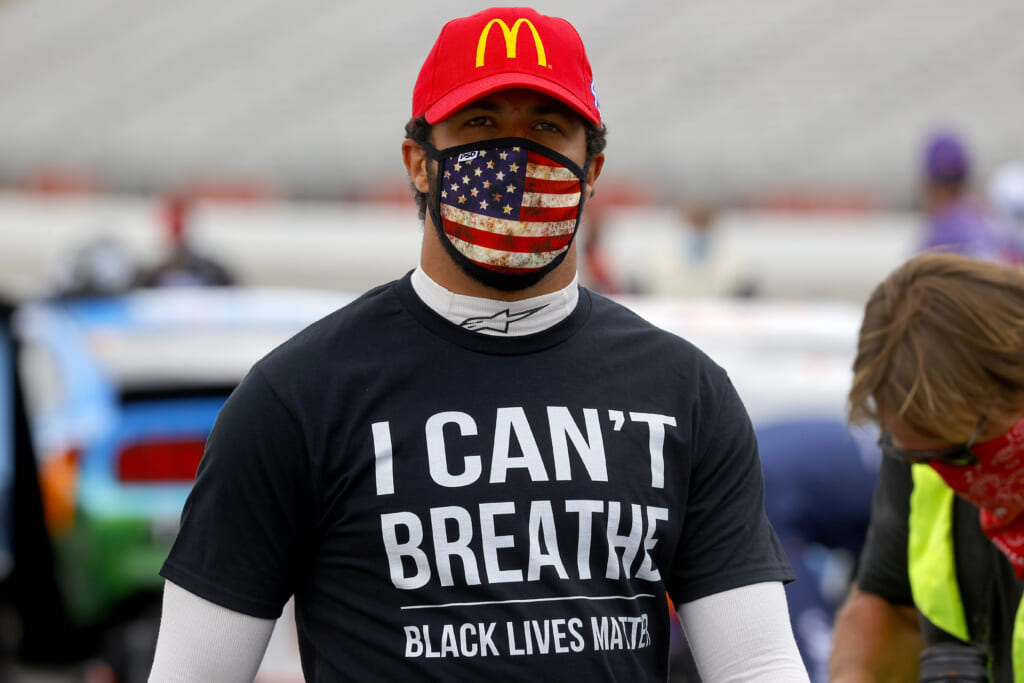 Bubba Wallace, driver of the #43 McDonald’s Chevrolet, wears a “I Can’t Breathe – Black Lives Matter” T-shirt under his fire suit in solidarity with protesters around the world taking to the streets after the death of George Floyd prior to the NASCAR Cup Series Folds of Honor QuikTrip 500 at Atlanta Motor Speedway on June 07, 2020 in Hampton, Georgia. (Photo by Chris Graythen/Getty Images)

Yet to the absolute shock of most observers, NASCAR did make an unprecedented video, denouncing racism and supporting Black Lives Matter unequivocally.

A moment of silence and a message from NASCAR President Steve Phelps and drivers. pic.twitter.com/jy1U48qeLX

Fox Sports reports that before the NASCAR Cup Series Folds of Honor 500 Sunday at Atlanta Motor Speedway on Sunday, NASCAR president Steve Phelps asked for a moment of silence. He paid tribute to the life of Floyd who was killed by police in Minneapolis.

“Our country is in pain, and people are justifiably angry, demanding to be heard,” Phelps said, addressing the drivers, pit crews and the TV audience as spectators weren’t there given the coronavirus pandemic.

“The Black community and all people of color have suffered in our country, and it has taken far too long for us to hear their demands for change.

“Our sport must do better. Our country must do better. The time is now to listen, to understand and to stand against racism and racial injustice. We ask our drivers … and all our fans to join us in this mission, to take a moment of reflection, to acknowledge that we must do better as a sport and join us as we now pause and take [time] to listen.”

This was followed by a moment of silence and then a video that included some of the sports’ top drivers, including Jimmie Johnson, Kyle Busch, Ty Dillon, Kevin Harvick, and Wallace.

Although the sport still has an issue with its fans flying Confederate flags at events, had little to say during Kaepernick’s anthem protest or any other previous issues and had team owners, including racing legend Richard Petty who said they’d never support anthem protests, it appears the younger generation is more open.

Drivers typically have been hesitant to address protests and racism in the past, so what is it about this moment that has drivers taking a public stand? Jimmie Johnson, who helped coordinate the prerace driver video, shares his thoughts: pic.twitter.com/szyL4qW9LX

Ironically, NASCAR developed during Prohibition when bootleggers found mechanics to soup up cars and drivers fast enough to elude the police and federal agents trying to stop them from running alcohol. The skills those drivers developed turned NASCAR into the racing juggernaut it is today. The creation of moonshine, now considered part of the craft alcohol culture, is also rooted in the Black community.