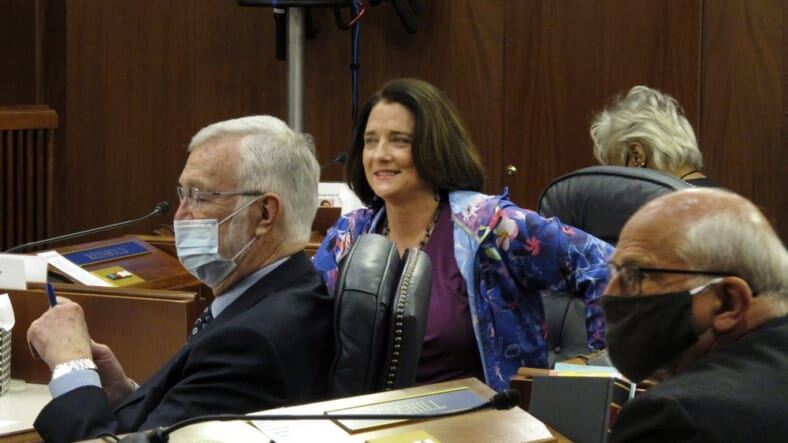 JEFFERSON CITY, Mo. (AP) — To the issues creating a partisan divide in state legislatures across the U.S., add this one: masks.

Many Democratic lawmakers are wearing them amid the coronavirus outbreak while many Republicans refuse.

As legislatures around the country resume work following coronavirus suspensions, Democrats and Republicans also have split over social distancing, remote voting and the extension of emergency powers for governors who had ordered businesses to close and residents to remain home.

Lawmakers have become ill from the coronavirus in nearly half the states, with Democrats accounting for about two-thirds of the 40 confirmed COVID-19 cases, according to an Associated Press tally. Three lawmakers died of the virus — a Michigan Democrat in late March and Republicans in Louisiana and South Dakota in early April.

Partisan divisions appear to have grown since then, particularly in the South and Midwest, as some Republicans pushed to reopen the economy faster than some Democrats. 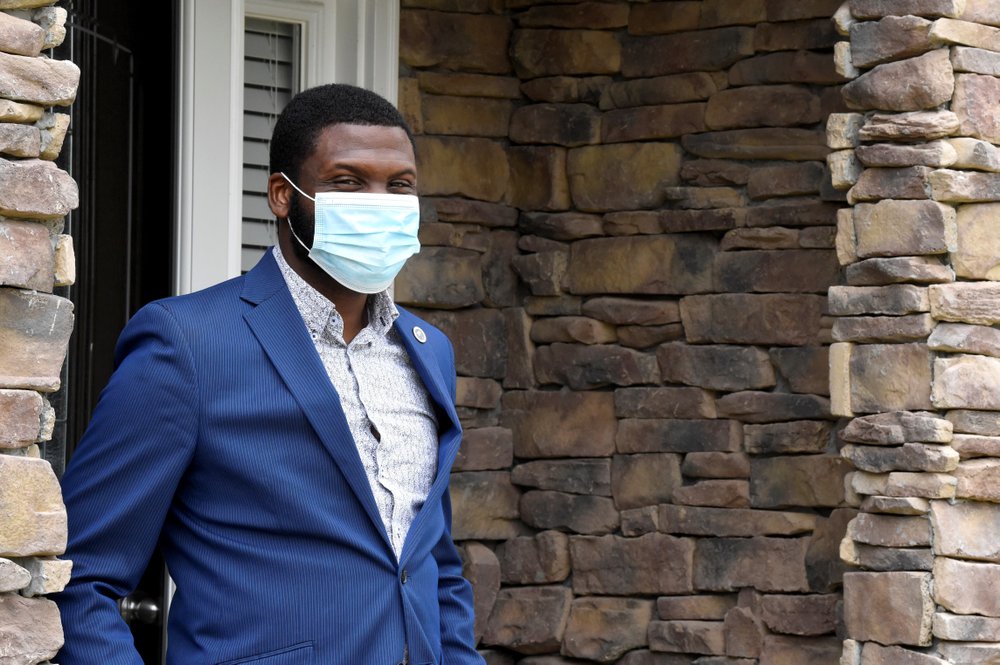 South Carolina state Rep. Kambrell Garvin stands at the entry of his home on Monday, June 8, 2020, in Blythewood, S.C. Garvin, a Democrat, is recovering from COVID-19, an issue that has created a partisan divide in state legislatures across the U.S. (AP Photo/Meg Kinnard)

While there have been bipartisan exceptions, mask-wearing divisions among Democrats and Republicans have been evident during recent legislative sessions in Arizona, Iowa, Kansas, Louisiana, Minnesota, Mississippi, Missouri, North Carolina, Ohio, Oklahoma, Pennsylvania, South Carolina and Tennessee.

In Illinois, Republican Rep. Darren Bailey was removed from a convention center functioning as the House floor last month for refusing to wear a mask. His ejection came just moments after the Democratic-led chamber approved a mask mandate with support from some Republicans in a move Bailey considered “a show.”

“The mask is not about health. It’s about more bureaucracy and more government control, of which the liberal Democrat thrives on,” Bailey told the AP.

When Pennsylvania Republican Rep. Andrew Lewis announced through a news release that he had self-isolated and recovered from COVID-19, Democratic colleagues expressed outrage that his diagnosis had been kept secret from them for a week. Democrats demanded changes requiring lawmakers to wear masks in the Republican-controlled legislature, but GOP legislative leaders have not acted on the request.

In Ohio, a Democratic proposal to require masks at House sessions and committee meetings was defeated on a party-line vote last month in the Republican-led chamber. A Republican lawmaker then filed legislation to bar mask requirements statewide unless approved by two-thirds of lawmakers. That measure is pending.

Some trace the partisan divergence on coronavirus precautions to the very top of American politics. Republican President Donald Trump hasn’t publicly worn masks, not even while announcing federal recommendations that Americans wear face coverings in public to help fight the spread of the virus.

“I think that when our president, from a national standpoint, signals that masks aren’t politically expedient, then I think that trickles down to the local and state level,” said Garvin, the South Carolina Democrat who has worn masks both before and after his coronavirus illness.

Several recent studies using polling and smartphone GPS data have shown that Democrats are more apt than Republicans to embrace social distancing in public, wear masks and stay at home because of the coronavirus.

Virus precautions have started to become an ideological means of group identification, similar to partisan divisions over abortion or other hot-button issues, said psychology professor Hank Rothgerber of Bellarmine University in Louisville, Kentucky. 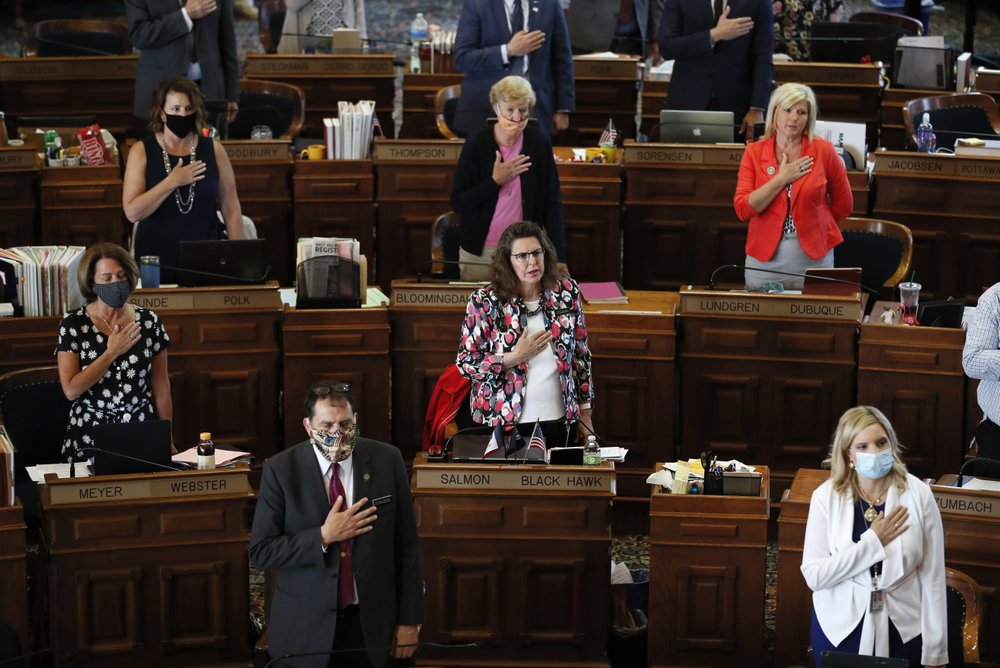 In this Wednesday, June 3, 2020 file photo, State Representatives stand at their desks during the Pledge of Allegiance in the Iowa House chambers, at the Statehouse in Des Moines, Iowa. (AP Photo/Charlie Neibergall, File)

“Democrats now have identified themselves as the party that’s taking this more seriously and is more concerned about public health,” Rothgerber said, “and Republicans are identifying themselves as a party that is focused on opening the economy back up and not overreacting to this crisis.”

When the Missouri House met in early April to pass a coronavirus budget bill, Republican leadership imposed strict social distancing. Lawmakers listened to proceedings over the internet in offices until summoned to the chamber in small groups to vote. Nearly everyone wore masks.

Yet those precautions were abandoned as the House finished its session in May. Lawmakers sat packed together at desks and few Republicans wore masks, though numerous Democrats still did.

Democratic Rep. Joe Runions, who had been out for six weeks with COVID-19, was aghast at what he described as “inconsiderate and selfish” behavior.

“To me, leadership starts with, you put that mask on. I don’t care who you are — the president, the governor, the pope, whoever,” Runions said.

Republican House Speaker Elijah Haahr noted that lawmakers’ temperatures were checked as they entered the Capitol.

Health screenings also were required of legislative staff and media at the Alaska Capitol, although lawmakers could skip it. Protocols said masks were required. But Republican state Sen. Lora Reinbold didn’t wear one.

“It didn’t make sense to me,” Reinbold said. “I saw no research on cloth, silk, cotton face coverings … that they prevent COVID.”

The coroanvirus can be spread through respiratory droplets when people cough, sneeze or talk. The CDC says cloth masks can help prevent people, who may not realize they are infected, from spreading the virus to others.

“The whole idea behind it is ‘I wear my mask to protect you,’ and it’s not so much to protect me,” said Kansas Democratic Rep. Barbara Ballard, who wore a mask festooned with the University of Kansas mascot during a legislative session last week.

Kansas House Majority Leader Dan Hawkins, who like many Republicans remained mask-less, said face coverings diminish personal communication because you can’t see lips. Republicans, he said, are “a very independent lot” who “really don’t like to be told what to do.”

Some lawmakers have removed masks when talking into microphones during debates — the very time when they may be more likely to expel virus-carrying particles. Others have worn loose-fitting masks that slip off their faces.

Colorado state Sen. Jim Smallwood, a Republican who had recovered from a mild case of the coronavirus, wore a mask that repeatedly slipped off his nose as he argued unsuccessfully last month against a Democratic rule change allowing lawmakers to vote remotely without attending sessions.

“I feel like it sets a good example and it puts other people at ease,” Smallwood told the AP.