Congressmen clash over police reform, race: ‘Was that a nerve?’

Rep. Cedric Richmond tells Rep. Matt Gaetz that he cares more about the Black children of the GOP than the Florida congressman does 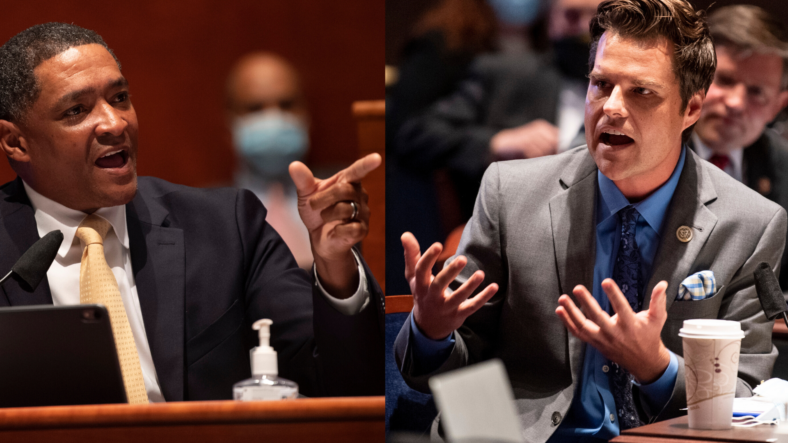 A House of Representatives hearing on police reform was sidelined by a shouting match between Louisiana Democrat, Cedric Richmond, and Republican Matt Gaetz of Florida.

In his opening remarks on the Justice in Police Act, Richmond said that he was “offended and angry as hell,” that Republicans want to inject “needless” amendments into the bill such as addressing Antifa.

“You all are white men who have never lived in my shoes, and you do not know what it is like to be an African American male,” said Richmond, who is Black. “And if you are opposed, let’s just have the vote. But please do not come into this committee and make a mockery of the pain that exists in my community.”

Representative Gaetz interrupted Richmond saying, “I appreciate your passion,” Gaetz said, “Are you suggesting none of us have non-white children?”

Richmond said that he understands that some representatives have Black grandchildren, but that most of them are white men who do not understand his plight.

Representative Cedric Richmond, a Democrat from Louisiana, speaks during a markup on H.R. 7120, the “Justice in Policing Act of 2020,” on June 17, 2020, in Washington, D.C. (Photo by Erin Scott-Pool via Getty Images)

Of the 40 representatives on the House Judiciary Committee, eight are Black and four are Black men. All eight are Democrats.

“It is about Black males, Black people in the streets that are getting killed, and if one of them happens to be your kid, I am concerned about them, too,” Richmond said, “And clearly, I am more concerned about him than you are.”

Gaetz, a staunch Trump supporter who once wore a gas mask on the House floor during debates over the coronavirus, exploded, “You are claiming you have more concern for your family than I do? Who in the hell do you think you are? That is outrageous.”

Richmond responded, “Was that a nerve?”

During the back and forth, Richmond invoked the spirit of Maxine Waters and punctuated his statements with “I reclaim my time.”

Gaetz attempted to have Richmond’s remarks stricken from the House record, and called Richmond’s complaints about the amendments to the bill “insincere.” The shouting match ended when the chairman of the committee, Rep. Jerry Nadler called for order.

The Black representative said that people are demanding action, stating he was “not interested in moving at a snail’s pace,” and rejected the notion of a “watered down” police reform bill.