Muhammad Ali Jr. says he hates how the movement for Black lives pits races against one another 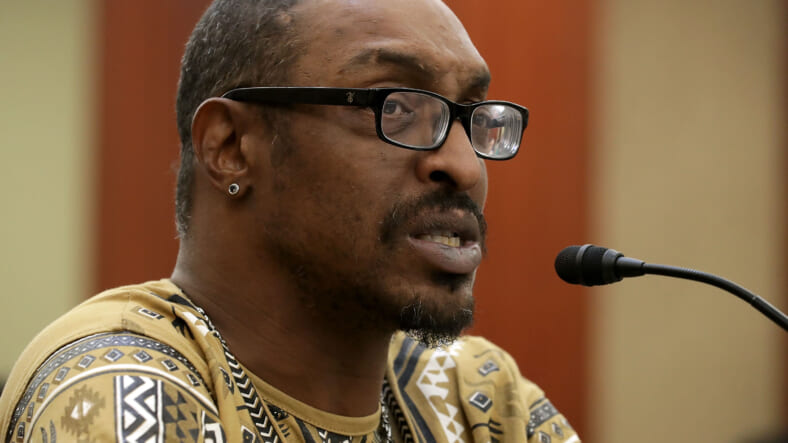 The late boxing great Muhammad Ali was a vocal advocate for civil rights of Black people during his career. However, on the fourth anniversary of his death, his son, Muhammad Ali Jr. states that his famous father wouldn’t be happy with the Black Lives Matter movement.

During an extensive interview with The New York Post, Ali, 47, said that Black Lives Matter, which doubles as both a slogan and a decentralized activist group, is “racist” and that protesters are “devils.”

“It’s a racial statement,” he said. “It’s pitting black people against everyone else. It starts racial things to happen; I hate that.”

Ali, who is Muslim like his father, feels that Black people shouldn’t be singled out. He was estranged from the senior Ali, who died in 2016, for the last 10 years of his life.

The only son of the three-time heavyweight champion of the world had harsh words for George Floyd demonstrators and rioters.

“Don’t bust up s–t, don’t trash the place,” he said. “You can peacefully protest.”

Ali said his father would agree.

“My father would have said: ‘They ain’t nothing but devils.’ My father said, ‘all lives matter.’ I don’t think he’d agree.”

Ali is a supporter of President Donald Trump and believes that his father would be, too, were he alive today.

“I think Trump’s a good president. My father would have supported him. Trump’s not a racist, he’s for all the people,” Ali explained. “Trump is much better than Clinton and Obama. … The only one to do what he said he would do is Donald Trump.”

READ MORE: Why Trump’s rally in Tulsa invokes the horror of the ‘Red Summer’ for Blacks

In response to the protests against police brutality, Ali asserted his support for American police, claiming it’s the few individuals who are to blame for wrongdoings, not the institutions.

“Not all the police are bad, there’s just a few. There’s a handful of police that are crooked, they should be locked up,” Ali said. “I never had a bad scene with a cop. They’ve always been nice and protect me. I don’t have a problem with them.”

Ali currently resides in Hallandale Beach, Florida where he is a landscape gardener and construction worker. He said he receives a monthly payment of $1,000 from his father’s estate.