Coronavirus cases, hospitalizations on the rise in California, Arizona and Texas

Tonya Pendleton   |
A pedestrian walks by a retail store that has reopened on June 16, 2020 in San Francisco, California. (Photo by Justin Sullivan/Getty Images)

As cities all around the country have opened up after quarantines due to the coronavirus pandemic, those reopenings are coming at a cost of a surge in cases. Texas, Arizona, and California are the three states leading the country in new cases and, even more disturbing, are experiencing a surge in hospitalizations.

NBC News reports that as cases decline in the Northeast, which were on strict lockdown for over two months, cases are exploding in the South and the Western parts of the country.

California was just deemed the nation’s leader in coronavirus cases, despite the strict lockdown imposed in March. According to ABC News, Gov. Gavin Newsom said the state’s cases jumped 69% in just two days. Most of those cases are concentrated in Los Angeles county, public health reports say.

California has reopened to some degree. Beaches, public pools, bars wineries, and gyms are among the businesses that have reopened. Clubs, concert halls, youth sports leagues, and movie theaters are still closed.

In Arizona, there were 144 more hospitalizations from Sunday to Wednesday, according to public health records. And the state’s ICU units and hospital beds are operating at more than 80% capacity.

“We’ve increased testing in Arizona 600 percent since April 15, we’ve more than doubled testing since we lifted the stay-at-home order, so we’re going to continue the focus there,” Arizona Governor Doug Ducey said. “But we’re also seeing an increase in positivity, which tells us that the virus continues to spread.” 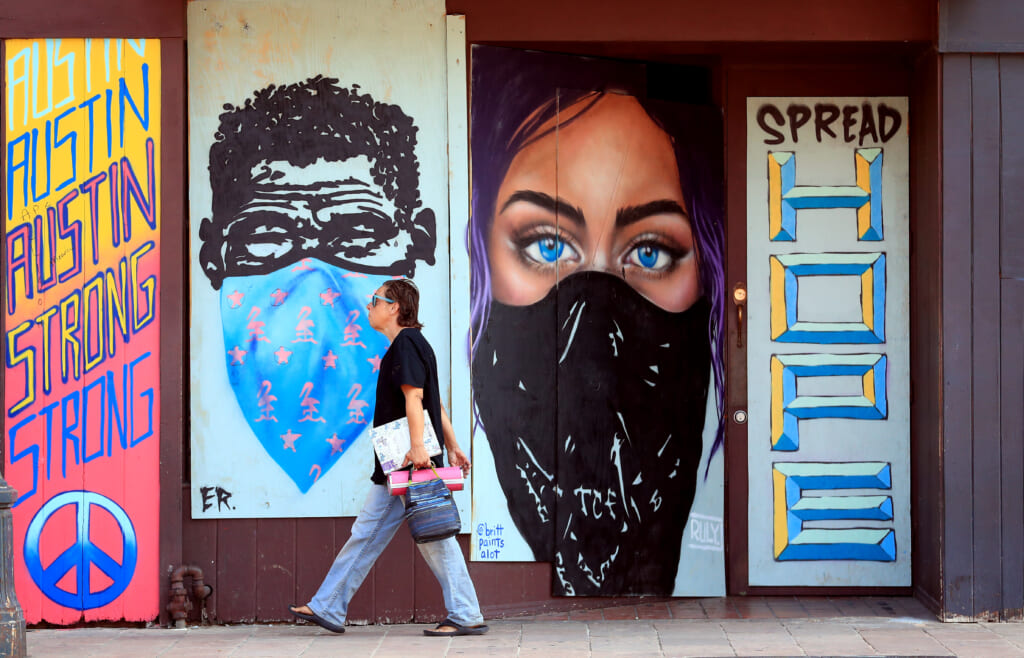 Pedestrians walk past murals painted on boards covering bar windows on 6th Street on May 20, 2020 in Austin, Texas. Texas Governor Greg Abbott announced that bars, wine tasting rooms, bowling alleys, skating rinks, bingo halls, aquariums, and equestrian events will be allowed to open on Friday, May 22nd despite a surge in confirmed coronavirus (COVID-19) cases in the state. (Photo by Tom Pennington/Getty Images)

Cases are spreading in the 20-44 demographic, Ducey said. Despite that Ducey blocked state lawmakers from mandating mask-wearing but has since reversed his policy.

In Texas, despite an average of 3500 new cases per day and record hospitalizations, Gov. Greg Abbott says shutting down the state again would be a ‘last option.’

“To state the obvious, COVID-19 is now spreading at an unacceptable rate in Texas, and it must be corralled,” Gov. Greg Abbott said.

He asked Texans to continue to observe social distancing, handwashing and said that outdoor gatherings could be restricted to less than 100 people while encouraging people to stay home if they could.

“Because the spread is so rampant right now, there is never a reason for you to have to leave your home unless you do need to go out,” Abbott told KBTX TV. “The safest place for you is at your home.” 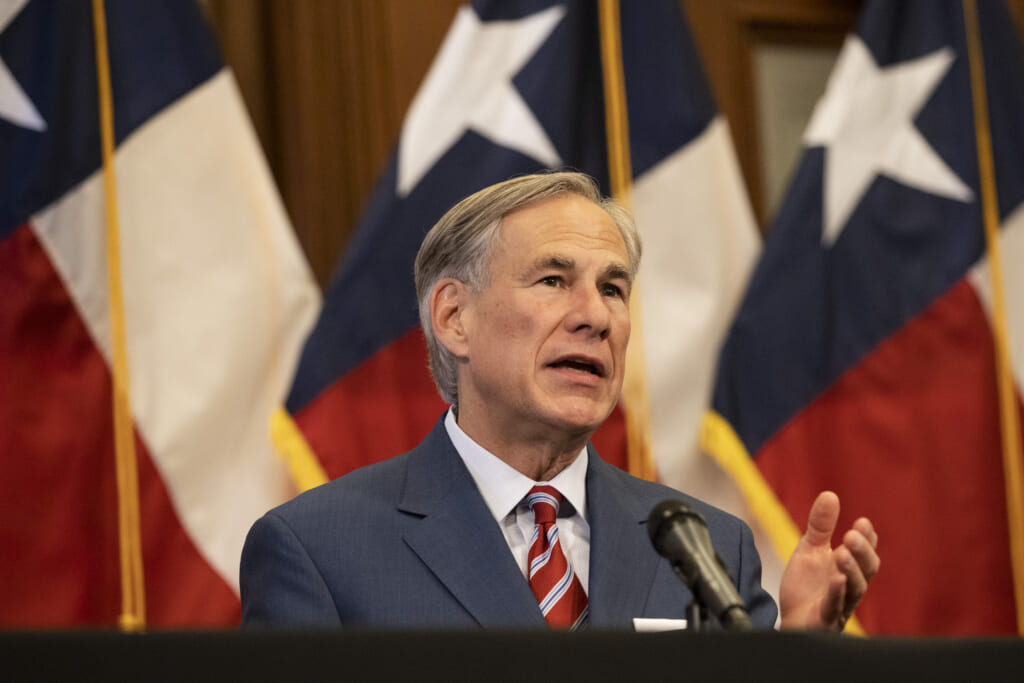 Texas Governor Greg Abbott announces the reopening of more Texas businesses during the COVID-19 pandemic at a press conference at the Texas State Capitol in Austin. (Photo by Lynda M. Gonzalez-Pool/Getty Images)

According to the Chron, Texas recorded 5489 cases on Tuesday, a record number. However, in a sign of good news, the CEO of Houston Methodist, Dr. Marc Bloom, says that they are managing the virus better, using treatments like convalescent plasma, prone positioning (turning patients on their stomachs) and the controversial drug Remdesivir and because of it, fewer cases are fatal.
However, the New York Times reports today that Wednesday marks the third-highest total of new coronavirus cases in the U.S., with 35,000 new cases reported. New York, along with New Jersey and Connecticut, announced that they would require visitors from nine states with surging virus counts – Alabama, Arkansas, Arizona, Florida, North Carolina, South Carolina, Utah, Texas, and Washington State – to quarantine when entering those states.
Their governors, including New York’s Andrew Cuomo, have no real enforcement capability but are asking people to comply.
Public health experts continue to warn that reopenings and people’s fatigue with the restrictions of the last few months will continue to cause an uptick in virus cases.
READ MORE: Scams on the rise during coronavirus pandemic
“The next couple of weeks are going to be critical in our ability to address those surges that we are seeing in Florida, in Texas, in Arizona and other states,” Dr. Anthony Fauci said in Congressional hearings before the House Energy and Commerce committee on Tuesday, according to the Times.
“The virus is not going to disappear.”