Daniel E. Walker and Kevin Powell both believe that America needs to rethink the anthem as it represents a 'deep-seated legacy of slavery and white supremacy' 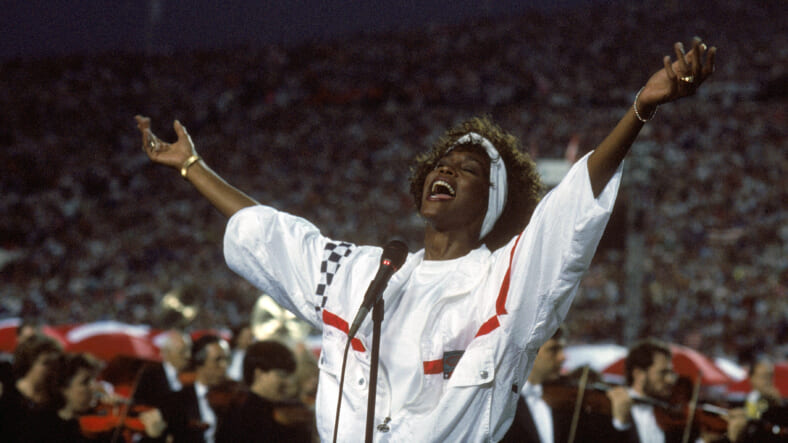 Whitney Houston sings the National Anthem before a game with the New York Giants taking on the Buffalo Bills prior to Super Bowl XXV at Tampa Stadium on January 27, 1991 in Tampa, Florida. (Photo by George Rose/Getty Images)

“O say can you see, by the dawn’s early light”

“The Star-Spangled Banner” was originally a poem written by Francis Scott Key in 1814. Key, born in Maryland wrote numerous articles opposing slavery, but he himself was a slave owner.

The first verse of the poem has become the national anthem of America, but scholars and activists are asking for the song to be replaced. Historian, Daniel E. Walker, and journalist, Kevin Powell, say “Yes!”

In an interview with Yahoo News, Walker said, “The 53-year-old in me says, we can’t change things that have existed forever.”

“But then,” he considers, “there are these young people who say that America needs to live up to its real creed.”

The historian said that there should be a real conversation to rethink the anthem because it represents a “deep-seated legacy of slavery and white supremacy.”

Powell added a sociological element to the interview suggesting that the context in which the song was written has to be examined.

“At that time, there were attacks on Native Americans and Black folks — both free Black folks and folks who were slaves — and Francis Scott Key was very much a part of that. He was also the brother-in-law of someone who became a Supreme Court justice, Roger Taney, who also had a very hardcore policy around slavery. And so, all of that is problematic.”

Protesters tore down a statue of Key in San Francisco last Friday, June 18. 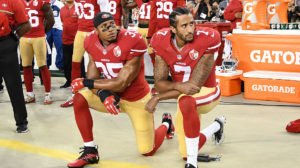 The anthem has been a source of contention in the United States for years. Former NFL star, Colin Kaepernick, began kneeling in 2016 during the anthem in protest of racial injustice and police brutality in the United States. The quarterback was later ousted from the NFL and has not been reinstated. He has gone on to become a champion for social justice.

The President of the United States Donald Trump has denounced protests during the anthem numerous times during his presidency. In a 2017 speech, he said, “Wouldn’t you love to see one of these NFL owners, when somebody disrespects our flag, to say, ‘Get that son of a b*tch off the field right now. Out! He’s fired. He’s fired!’”

Whitney Houston’s 1991 rendition of the “Star-Spangled Banner” is considered the benchmark for all performances of the anthem. She performed the anthem 10 days into the Persian War to an audience of over 750 million.