Dan Springer was forced to retreat into an SUV as the massive crowd shouted at him and demanded he apologize for pushing a female protester. 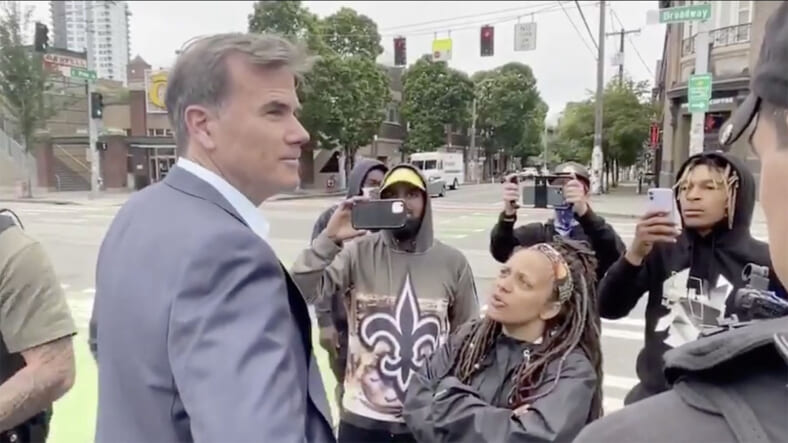 Fox News Correspondent Dan Springer wasn’t ready for the smoke that Black Lives Matter protesters were preparing to serve him during an event on Monday.

Springer and his crew were accosted by demonstrators after he allegedly laid hands on a woman at Seattle’s Capitol Hill Occupied Protest (CHOP), DailyMail.com reports. Chaos erupted when Springer pushed the protestor out of his way, prompting the woman to throw her coffee at him.

Fox News claims the incident occurred when an individual chest-bumped the anchor after overhearing Springer phone his producer to cancel a live shot due to the “filthy language”  that protestors were using.

Fox News Vice President of Domestic Bureaus and L.A. Bureau Chief Nancy Harmeyer said, “At no point during the situation did the Fox News crew ever physically instigate or retaliate in any way against the protesters.”

The incident went down hours after and near where two Black teenagers were shot when they tried to plow through barricades surrounding the area. A 16-year-old boy was killed and a 14-year-old is reportedly in critical condition.

#DEVELOPING: So the man that was in that car got out and started walking away from #CHOP.

Protestors followed, swarming. Again, they say he’s an #FNC reporter and that he shoved a female protestor.

He said nothing in response. They walked several city blocks. @NBCNews pic.twitter.com/6QQBy7mjxY

Springer and his crew were forced to retreat into an SUV as the massive crowd shouted at him and demanded he apologize. The woman who claims she was shoved jumped on the hood of the car while others laid down on the ground in front of it.

Once the BLM mob died after about 20 minutes, another vehicle pulled up to the rescue, Springer jumped inside it and fled the scene.

#UPDATE: #CHOP Protestors tell me he was followed all the way to the West Precinct on foot. About a mile away. No physical incident occurred. No one injured.

They wanted an apology for what they say happened: A shove and non-racial slur.

He reportedly said nothing. @NBCNews pic.twitter.com/0fzAvSzPFC

“While covering the news just outside of Seattle’s CHOP zone this morning, a protester confronted Fox News Channel correspondent Dan Springer and his crew after overhearing him cancel a live report due to ‘filthy language’ in the background,” Harmeyer said.

“The protester started yelling at him and threw a cup of coffee in his face and on his jacket. Attempting to de-escalate the situation, the crew returned to their vehicle, which was then surrounded by protesters, she added.

EXCLUSIVE: Fox News reporter trapped inside his car by dozens of protesters after he 'shoved' woman in Seattle's CHOP zone https://t.co/xYizeU2OUr pic.twitter.com/ODNfp1X9YP

“Unable to drive away, the crew turned the car off and walked away from the scene. At no point during the situation did the Fox News crew ever physically instigate or retaliate in any way against the protesters,” Harmeyer said.

Springer reportedly called 911 for police assistance during the confrontation but officers did not respond.