Relationship rumors have long shrouded the singer and the Red Table Talk host, with his 2019 track 'Nunya' fueling the speculation. 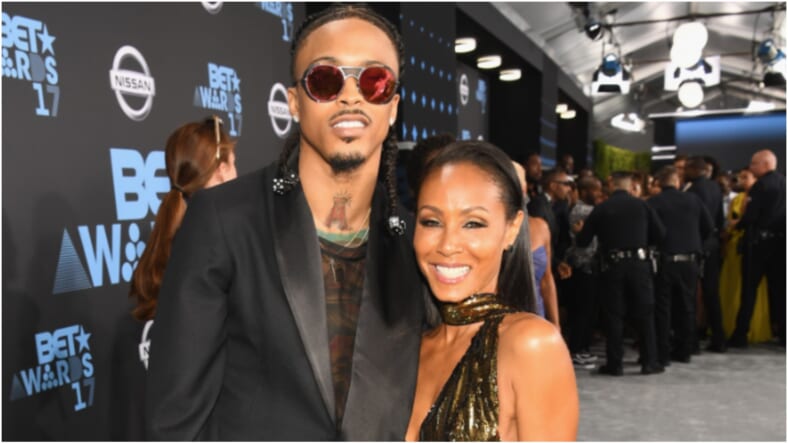 August Alsina nearly broke the Internet on Tuesday after an interview dropped of him confessing to having romantic relations with Jada Pinkett Smith.

During a recent sit-down with Angela Yee, the R&B singer served up a bombshell when he confirmed his past love affair with the actress, thejasminebrand.com reports. Their relationship even had the blessing of her superstar husband Will Smith.

Relationship rumors have long shrouded Alsina and the Red Table Talk host. His 2019 track “Nunya” fueled the speculation, as the lyrics go: “You got me feeling like it was an act, you’re just an actress/Putting on a show ’cause you don’t want the world to know.”

Fans decided that in the song, he’s implying that he had an affair with the mother of two. Additionally, the woman he’s texting in the music video is named Koren, which is Pinkett Smith’s middle name, theGRIO previously reported.

The track refueled the 2018 rumor that the two were in a secret relationship, but the pair have always remained mum about it. Now it seems Alsina has had a change of heart.

When Yee asked him about his love life and to set the record straight about “Nunya,” the R&B crooner didn’t hold back in spilling the tea.

“People can have whatever ideas that they like. But what I’m not OK with is my character being in question …” he said around the 16:30 mark of the YouTube clip above. “I also don’t think that it’s ever important for people to know what I do, who I sleep with, who I date, right? But in this instance, there are so many people who are side-eyeing me,” Alsina explained.

Adding, “I’ve lost money, friendships, relationships behind it. And I think it’s because people don’t necessarily know the truth. But I’ve never done anything wrong. I love those people (the Smiths) … They are beautiful people.”

Alsina went on to recall his discussion with Will Smith about the situation with his wife.

“I actually sat down with Will and had a conversation … He gave me his blessing,” he said. “And I totally gave myself to that relationship for years of my life, and I truly and really, really, deeply loved and have a ton of love for her,” Alsina confessed.

“I devoted myself to it. I gave my full self to it. So much so that I can die right now, and be OK knowing that I fully gave myself to somebody … Some people never get that in this lifetime.”

During his conversation with Yee, Alsina said speaking his truth was “difficult” because it’s “hard for people to understand” polyamory and consensual nonmonogamy.

“I have to speak up about my truth, he said. “Walking away from it butchered me. It almost killed me. Not almost. It did—it pushed me into being another person. It broke me down. It probably will be the hardest thing I ever had to experience in this lifetime, Alsina admitted.