Michelle Obama encourages NBA, WNBA players to use their platform to promote voting 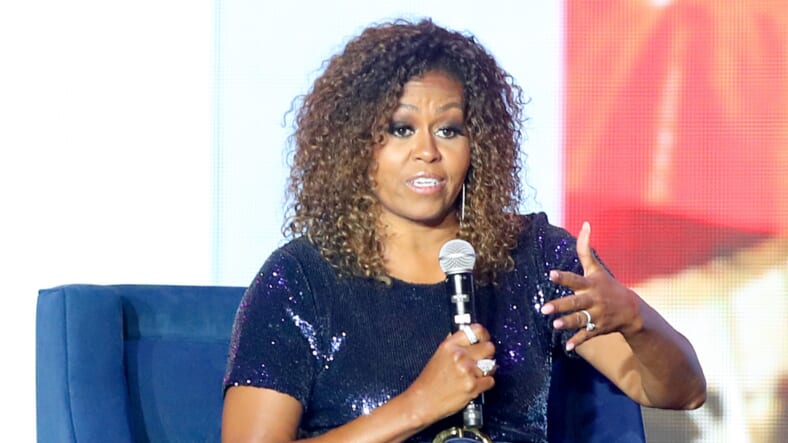 Michelle Obama is encouraging the players in the NBA and WNBA to use their platforms to speak out on matters of racial injustice and voting.

The former first lady hosted a discussion with the leagues about voting on Sunday, Thunderwire reported. Chris Paul, point guard for the Oklahoma City Thunder, shared details of the talk with the media on Monday during a Zoom call.

Paul, the president of the National Basketball Players Association said it was the first time both the WNBA and NBA came together on an issue of such magnitude.

“Coming down here, what we have the opportunity to do is use our collective voices, obviously to spread a message, but we also get a chance to educate each other,” Paul said.

“She’s already captivating in how she carries herself as a former first lady, and our forever first lady,” Paul said. “Her presence is captivating but her words, and what she said yesterday, and how inspirational she was.”

Athletes from both leagues are currently sequestered – the WNBA at the IMG Academy in Bradenton, Florida, and the NBA at Walt Disney World Resort in Orlando in respective “bubbles.”

They are living, practicing, and playing games in those locations due to the coronavirus pandemic. The NBA season was suspended on March 11 when Utah Jazz player Rudy Gobert tested positive for COVID-19. The 2020-2021 WNBA season had not yet started.

Paul said that the time in the bubble has allowed the players a chance to use their “collective voices” and spread the message about the importance of voting.

“The more we encourage each other to vote, not just every four years, but two years in your local election and things like that,” Paul said. “The more we do that, the more our voice can really be heard.”

Portland Trail Blazers guard C J McCollum, a member of the NBA players union’s executive board, was also a part of the call. He emphasized the need for people to take their civic duty seriously and cast a ballot in the upcoming elections.

“It’s about what type of impact we can have as a whole as African Americans and Blacks in a position of power, and how we can continue to spread that positive energy and try to make it as easy as possible for people to get to the polls,” he told USA Today.

“There is voter suppression that goes on in a lot of cities. It will be nice to see if they can open that up and continue to figure out ways to allow us to be able to submit votes via mail.”

Paul stated that players hope to use this moment to educate one another and contribute to social change in other ways.

“Guys come to a meeting to discuss things, and two guys who never had a relationship figure out that they have a common interest in whatever it may be — whether it’s financial literacy, whether it is police reform, whether it’s education, whether it’s HBCUs; guys can start to build together. That’s what we’ve been talking about. We need to unite, become a uniting force in a lot of this action that’s going on,” he said.

To that end, players from the NBA have agreed to donate $300 million to social justice causes.

“The jerseys are part of it, but we know that we need the money and the funding to really make change,” he said Friday.