Cardi B, Megan Thee Stallion cause internet frenzy with release of ‘WAP’

Explicit lyrics and a racy video draws mixed reviews from fans, but all agree that they simply can't stop watching 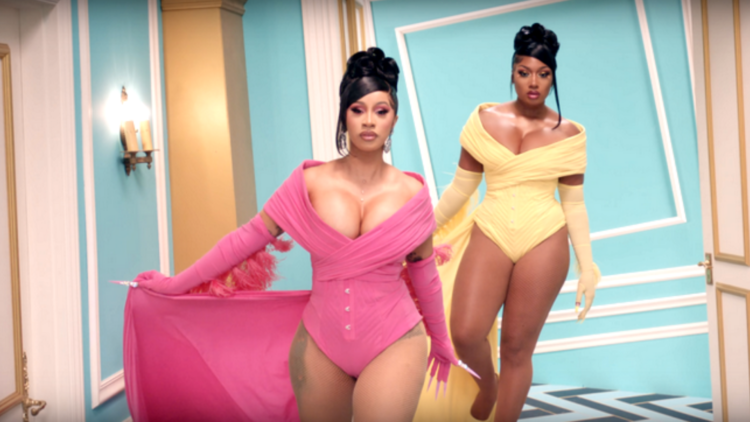 The internet has not stopped talking about Cardi B‘s new single “WAP” featuring Megan Thee Stallion. The new collaboration between the two top Hip-Hop stars was dropped at midnight on August 7, to a great reception from their fans.

However, there are pockets of critique that believe the song’s lyrics and video are hyper-sexualized, and not appropriate for the rapper’s young fan base.

The cameos that drew the most attention were Rosalía, Normani, Kylie Jenner, Rubi Rose, Sukihana, and Mulatto.

Skin-tight python-printed outfits by Bryan Hearns accentuated Cardi and Megan’s bodies as they seemingly mirror each other’s sexy. The two of them play off of one another’s energy throughout the video, communicating in more ways than just their provocative rhymes.

Indeed the unedited title and song are vulgar, but for the censored version, YouTube has taken liberties to blurr and mute —with hopes not to offend advertisers and as an offering for younger fans. On this clean version the ladies rap, “wet and gushy.”

After one fan listened to the explicit version they tweeted: “I see why YouTube wasn’t ready for @iamcardib @theestallion uncensored #WAP version,” wrote @Tamcarth91.

“I was so mad cause it takes away from the song but I get it ??‍♀️MAKE SURE YA LISTEN TO THE REAL VERSION ON ALL STREAMING PLATFORMS !!!!!!” tweeted Cardi B in response to being censored.

Early in the week, the Quality Control artist recruited Ms. Roc Nation to promote the song, by teasing cover art for the single. But no one expected the song to be more risque than any of the other projects that either femcee has released.

One viewer used a gif to express how impressed he was by their music video.

Other tweeters remained focused on how well Cardi B and Megan Thee Stallion executed their performance. “Oooohhhh Cardi and meg did what needed to be done,” posted @nitaaababyy.

@loneamorphous echoed Cardi’s sentiments about listening to the explicit version.

Even singer Kehlani tweeted out, “WAP is a movieeeeeee. a cinematic moment. *chefs kiss* a motion picture!”

Outside of the shocking lyrics, people took exception with Kyle Jenner‘s appearance.

And according to a tweet from Kayla Solomon, the “WAP,” frenzy is just beginning.

The “WAP,” music video was directed by Colin Tilley with creative direction by Kollin Carter and Patience Foster.