‘He was 21 for 24 hours’: Dannielle Brown continues hunger strike for answers about son’s death

The grief-stricken mother began a hunger strike to bring awareness to the passing of her son, who died under mysterious circumstances while at university 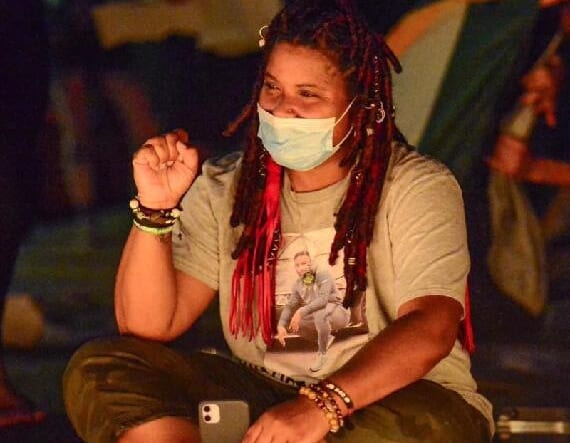 How are you holding up ?

This is day 33 and it’s getting much more difficult!

That was my text exchange with Dannielle Brown earlier this week. It sounds like a check-in for a friend kicking a smoking habit, starting a new job or doing a juice cleanse. Unfortunately, it was nothing that simple. Brown is on a (as of this writing) 34-day hunger strike.

This isn’t skipping a few meals, fasting or being “hangry” for a few hours. Scientists have shown that within days, if a body doesn’t have food, it will break down whatever it can—fat, muscle, anything to sustain itself. Delusions, dizziness and permanent heart damage potentially kick in by the second week. At day 34, Brown, a 40-something Howard alum and mother of two, is dying a slow and painful death.

It’s a pain worse than drowning or suffocating—a hunger strike is ongoing daily bodily torture. Is it more painful than going out a 16th floor window and falling to your death? Brown doesn’t know, but that’s what happened to her son, Marquis Jamal Brown, at Duquesne University in October 2018. And Dannielle will stay at Freedom Corner in Pittsburgh’s Hill District, on a hunger strike, until she finds out.

“I’m just an ordinary Mom from Washington D.C.,” Dannielle says when I call her. Her voice is upbeat, but determined and hauntingly familiar. An accomplished woman with a master’s degree in social work who’s worked at the Department of Defense for years, she sounds like so many women I know, went to school with and grew up with. An ordinary mom swept up in a pain that is finally being recognized nationally.

“You have to excuse me,” she said. “You hear the raspiness in my voice. This is day 26 and it’s affected my voice. I worry about the people who want to interview me during the evening—you’re getting the best of me.” She laughs a bit as she relates how the hunger strike is affecting her—the dry mouth, repeating sentences over and over, it’s as if her body is fighting itself.

Dannielle’s tone and warmth are surprising given the challenge she’s undertaken and the burden she carries. We talked as she walked out of Starbucks, our conversation occasionally interrupted as she said hello to men and women that recognized her from her protest. A drink from Starbucks is her lone sustenance during the day, no carbs, no food based drinks, just grapefruit juice or Vita water. The air conditioned store is a brief respite from the elements outside, but even then she’s still strategizing on how to get answers, if not justice, for Marquis’ death.

Marquis was a quiet kid, a good student who’d never been in trouble, never suffered from depression or mental illness and played football at Duquesne University. He was living the typical college life until his birthday on October 3, 2018.

“My son is Marquis Jaylen Brown, he was 21 for 24 hours,” said Dannielle, who’s demeanor changed from determination to sadness over the phone.

The investigation, as it were, by Duquesne University is sketchy at best.

According to the police report, Jaylen tried marijuana for the first time on his birthday, sharing a bong with his roommate. Later that night he was acting strangely, running in and out of his room, skipping through the hallway and knocking on doors, nothing violent but unusual for him. Two university officers and a resident assistant were dispatched to his room after a noise complaint and that’s where the story gets fishy.

Duquesne’s investigation claims Marquis suddenly picked up a chair, smashed out his window and jumped out, falling 16 floors to this death. The entire encounter lasted less than 10 minutes and the police claim Marquis was so fast they couldn’t stop him. The school concluded it was a terrible incident that resulted in an avoidable death, but somehow nobody was at fault.

“They pulled a Karen card,” Dannielle said as annoyance tinged her voice. “They [Duquesne] said that the police officers in my son’s situation were Black. I don’t care if they’re Black, white or tangerine, they didn’t keep him away from the window where others have gone out that same window at Duquesne.”

After Marquis’ death and the initial investigation concluded, Dannielle tried to move on her with her life. But she couldn’t. The official story didn’t make sense. How did her son get past so many officers? Why was there no video? Why wasn’t she interviewed about his mental health? Why no toxicology test on the bong?

“I was at home for the last two years. I was suffocating. You know that Black Lives Matter slogan, ‘I can’t breathe?’ So for a lot of us mothers who have lost their children under questionable circumstances, we feel like we can’t breath either,” she explained.

Thousands of unknown Black men and women protest police violence and brutality every day. Some we get to know, some have children who have become hashtags. In Dannielle’s case, I asked what drove her to something so physically dangerous and symbolic as a hunger strike. Something that would put her life at risk.

She talked about how she’d raised Marquis and his older brother, Jamal, to be fighters and had taken them to marches and protests growing up. The idea of a hunger strike simply came upon her after seeing the protests all around the nation in the wake of George Floyd’s death at the hands of the Minneapolis police.

“I had enough, I woke up, and it was just automatic,” she said. “I called my estate attorney, [I said] ‘I need to do a will.’ It was almost like I just had an epiphany, it was so clear what I needed to do. I’m going to Pittsburgh and I’m not coming back until I get the answers I need.”

She chose Freedom Corner in Pittsburgh’s Hill District because she found being near St. Benedict the Moor church to be comforting.

“It was built to honor our ancestors with social action to come together and exchange ideas,” she shared. “I took my rocking chair out of the car, I parked it underneath the image of the woman with her arms spread out as if she’s praising and I sat for two days in the elements.”

Initially, no one knew what Dannielle was doing, but as the hunger strike has continued a full community, a tent city, has grown around her demanding change from the university. While she has received help from civil rights attorney Lee Merritt and now has access to the original police report, she is still demanding mental health training for officers and body cameras for off-campus police. She is also raising money for an independent investigation.

Duquesne University maintains it’s position that the investigation into Marquis’s death was fair and conclusive. Danielle wants to partner with Duquesne and other universities to set up programs to better protect Black children. She doesn’t want any other mother to send their Black child to college and have them come home in a casket. As for her, the hunger strike on Freedom Corner will continue until change happens.

“I’m willing to be here and take my last breath,” Dannielle told me as she described her last conversation with Jamal before driving up to Pittsburgh. “He said, ‘Mom if you take your last breath, they’re gonna have me to deal with.’ He’ll pick up that torch and come right behind me.”

“Either way,” she concluded, “We’re gonna get answers for my son. We’re gonna make sure mothers have voices.”