EXCLUSIVE: JustLeadershipUSA is leading a cause once in the shadow of other policy issues. 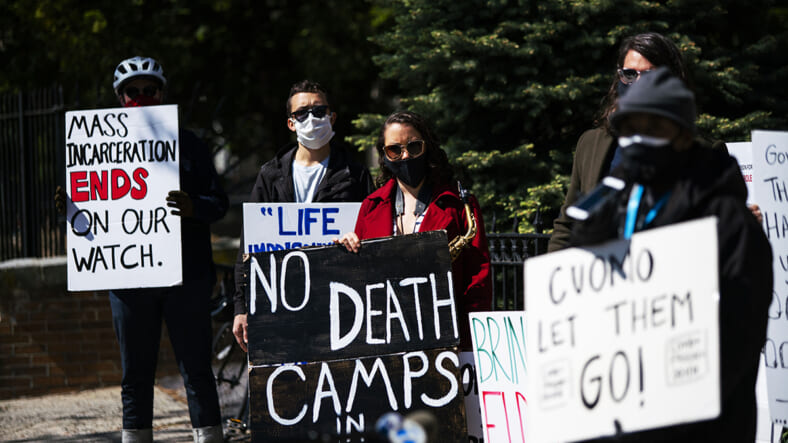 JustLeadershipUSA, an organization that empowers people most affected by incarceration to drive policy reform, will bring the compelling, poignant human stories of those formerly incarcerated to the Democratic National Convention this week.

On Monday and Tuesday, JustLeadershipUSA will be hosting the event, Rebuilding the Table, that will include panelists, like Jimmie Gardner, who was wrongfully convicted for 27 years, and DeAnna Hoskins, the president and CEO of JustLeadershipUSA who herself was formerly incarcerated.

Among attendees, actor Michael K. Williams from When They See Us will host an intimate conversation on Day 1 with award-winning poet and author Dwayne Betts, who himself was formerly incarcerated for eight years.

“What we’re trying to accomplish is just leading the vision of individuals who have been impacted by the criminal justice system in proximity to power … who has the power to change the law,” Hoskins, president, CEO of JustLeadershipUSA told theGrio.

JustLeadershipUSA Rebuilding the Table will create an opportunity for the DNC, Democratic officials, and Vice President Biden’s campaign to hear directly from the people whose lives are most affected by our country’s criminal legal system.

theGrio spoke with a few panelists about why this event is especially prevalent right now and what they hope to achieve from the event.

Former pro athlete Jimmie C. Gardner spent 27 years behind bars in West Virginia’s prison system, for a crime that he was wrongfully convicted for in 1989. Gardner will be a panelist at Rebuilding the Table and is looking forward to sharing his story to bring awareness to the often overlooked views of people affected by mass incarceration.

“I’m one of the many that have been formerly incarcerated wrongfully and or rightfully that deserve an opportunity to be at the table to be heard, to hear from our perspective.,” Gardner tells theGrio.

Since his release, Gardner has focused on bringing awareness to people incarcerated and sharing his story as an inspiration for affected families. “I’ve been speaking and sharing my testimony and working in different areas, and just trying to be heard, trying to be a voice for the voiceless,” says Gardner.

As an advocate, Gardner has even launched a business called J.C. Gardner Speaks. He hosts many programs, including his Instagram series called Freedom Fighter Friday, where he highlights the freedom fighter making a change in the community. Alongside his series, Gardner has also launched the Gardner House INC. With a purpose to provide a safe place and segue for returning citizens.

While attending Rebuilding the Table, Gardner hopes to expand the voiceless voice and help establish legislation that will actively support the people affected by incarceration.

“I want them to be heard. I want these individuals to have that opportunity,” Gardner emphasizes.

JustLeadershipUSA president Hoskins previously served as a senior policy advisor at the U.S. Department of Justice and as the Deputy Director of the Federal Inter-Agency Reentry Council during the Obama-Biden administration.

DeAnna helped launch Rebuilding the Table under the JustUs Campaign, a national campaign dedicated to changing legislation to protect incarcerated individuals’ rights and safety. The event is designed to create an outlet for people affected by incarceration to be heard by elected officials that can make an effective change through legislation.

“We are the people most impacted by those laws you put in place; we need a seat at the table with you to come up with a plan,” Hoskins tells theGrio.

Hoskins encourages Grio readers to attend the event and get involved in The Just Us Letter Campaign. To join the letter campaign, you add your name and address, and your elected officials and representatives will pop up for you to send a pre-written letter of support.

“There are disaster plans that protect the building in a hurricane, but not the people inside that are serving time. So that’s why we have our JustUs campaign, we want justice. It’s time to have equity and be treated like humans,” DeAnna tells theGrio.

To learn more about JustLeaderShipUSA and hear the stories of people most affected by Mass Incarceration, make sure to tune into the digital event from August 17-18. Click here to register.