Protests break out in Mauritius capital after massive oil spill 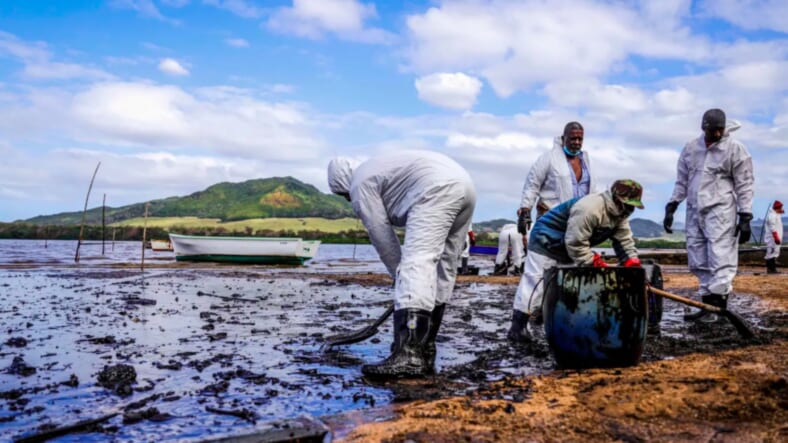 People scoop leaked oil from the vessel MV Wakashio, belonging to a Japanese company but Panamanian-flagged, that ran aground and caused oil leakage near Blue bay Marine Park in southeast Mauritius (L’Express Maurice/AFP via Getty Images)

Hundreds of people flocked to Port Louis, the capital of Mauritius, waving the country’s flag and holding up protest signs over the government’s handling of the recent oil spill.

Veronique Couttee, a conservation biologist originally from Mauritius, said the spill had united residents in anger over the government’s alarmingly slow response to the disaster.

On Friday, Greenpeace said at least 40 dead dolphins have washed ashore in an area of Mauritius affected by the oil spill. The spill was caused by a Japanese boat that struck a coral reef on July 25, spilling 1,000 tons of fuel into the sea.

Reuters reported that fisherman Yasfeer Heenay and other local fisherman attempted to pitch in by herding scores of dolphins away from the pollution. Heenay reported seeing a mother dolphin and her baby struggling during the rescue mission.

He said the baby dolphin was very tired and didn’t swim well, but the “mum stayed alongside him, she didn’t leave her baby to go with the group. All the way she stayed with him. She was trying to protect him.”

Reuben Pillay, a professional drone operator and environmentalist provided Reuters with footage of the calf wallowing on its side and eventually dying in front of the fishermen who witnessed it floating on the waves.

Pillay tracked the mother dolphin and noted that she initially looked normal. “But in a few minutes she went on her side, one fin in the water and one out of the water and then she started flapping her tail really, really rapidly,” he said.

“She swam in circles in front of the boat, she moved her tail very violently and after about five minutes she stopped moving. and she sunk. We heard cries, I thought it was a woman on the boat, but they told me, no – it was the dolphin,” Pillay continued. “We didn’t know what to do. It was heartwrenching.”

Thousands of civilian volunteers worked for days, creating makeshift oil barriers in an attempt to minimize the damage caused by the spill.

Some experts fear the chemicals in the fuel are to blame for the dolphin deaths. Meanwhile, residents and environmentalists have demanded investigations into why the Japanese ship strayed miles off course.

According to Mauritius officials, the ship’s captain and first officer have been arrested and charged with “endangering safe navigation.”

Autopsy reports done on 25 dolphins that washed ashore on Wednesday and Thursday are expected to be completed in the next few days, according to Jasvin Sok Appadu, a spokesman for the Mauritius Fisheries Ministry.