Adidas matched the donation, bringing the total up to $90,000. 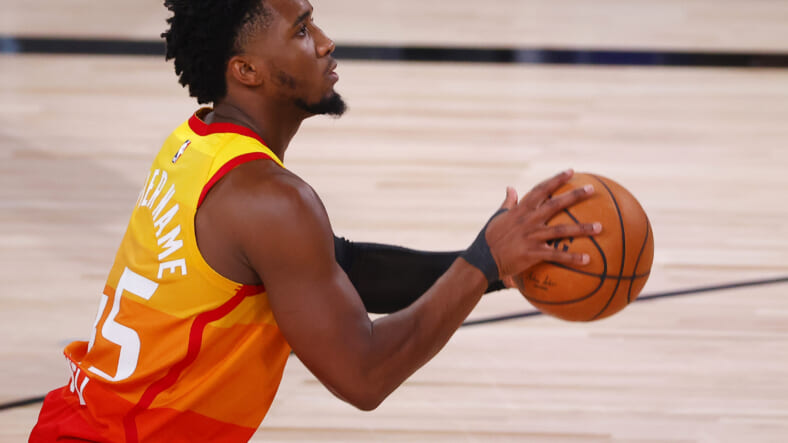 Donovan Mitchell #45 of the Utah Jazz shoots a free throw against the Denver Nuggets during the third quarter in Game Three of the Western Conference First Round during the 2020 NBA Playoffs at AdventHealth Arena at ESPN Wide World Of Sports Complex on August 21, 2020 in Lake Buena Vista, Florida. (Photo by Mike Ehrmann/Getty Images)

NBA star Donovan Mitchell has donated $45,000 for a scholarship for Jacob Blake’s children. Adidas matched the donation, bringing the total up to $90,000.

“Education reform is something I really believe in and I believe will be able to help push our country and our future past the point we’re at,” Mitchell said, according to Newsone.

“Allowing kids to understand and be able to go into the same classrooms and be able to be taught at a level playing field is something I believe is the key to generational success and being able to push past racism, systemic racism, voter suppression and everything,” Mitchell continued.

Blake’s three sons are 3, 5, and 8-years-old. They were in the backseat of an SUV when they witnessed Kenosha police officer Rusten Sheskey fire seven shots into their father’s back.

Mitchell said that the donated money comes from his latest sneaker release. The sneaker in question is his new D.O.N Issue #2 Spidey-Sense sneakers, an Adidas product made in collaboration with Marvel Comics. “Spida” is also Mitchell’s nickname.

“Adidas stands in solidarity with athletes, coaches and cultural leaders driving positive disruption and demanding justice for the senseless shooting of Jacob Blake and the many whose lives have been impacted by systemic racism,” Adidas wrote in a statement on its website.

“Donovan Mitchell and Adidas will donate all proceeds from the sales of the D.O.N. Issue #2 launching today, up to $90,000, to a college scholarship fund for the children of Jacob Blake,” the athletic wear company continued.

The limited-edition “Glory Mint, Signal Green and Solar Red” colored shoes are glow-in-the-dark, according to comicbook.com.

Marvel x Adidas D.O.N Issue #2 is available on adidas.com and they are priced at $100. The previous shoes, Issue #1, are still available for as low as $50.