The man's identity has not been released 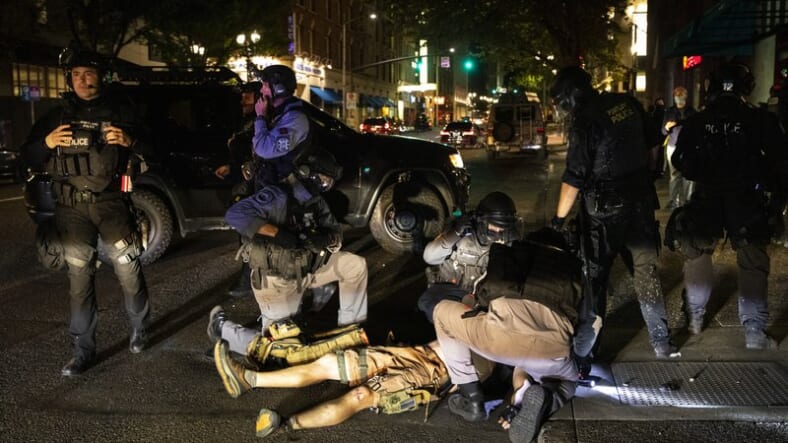 A man is being treated after being shot Saturday, Aug. 29, 2020, in Portland, Ore. (AP Photo/Paula Bronstein)

A man was shot and killed at a rally in Portland, Oregon on Saturday after protesters against police violence were met by a caravan of counter-protesters, according to news reports.

The demonstration had been interrupted by a group in support of President Donald Trump, who has been critical of protests that broke out across the country over the death of George Floyd in late May and fueled by ongoing tense relations between law enforcement and Black communities.

According to the New York Times, a protest had been taking place in the city’s downtown when a procession of trucks and vehicles carrying Trump supporters arrived.

While Floyd-inspired protests had been taking place every day in the city for more than three months, a planned counter-rally dubbed “Trump 2020 Cruise Rally in Portland” had driven through the crowd, CNN reports.

The participants of the Cruise Rally were shooting paintball guns at the protesters from trucks, some of which carried signs that read “Trump 2020” or “Thin Blue Line.” This led others to retaliate by throwing objects back at the vehicle.

Portland police responded to gunfire that had taken place about a quarter before 9 p.m. When they arrived on the scene, one man was dead on the street from a gunshot to the chest.

While the victim is still unnamed, New York Times reports he was wearing a hat from a Portland-based far-right group Patriot Player. The shooter has not been identified, but Portland Police Chief Chuck Lovell says authorities are looking for a suspect.

“This violence is completely unacceptable, and we are working diligently to find and apprehend the individual or individuals responsible,” said Lovell, who gave a statement on Sunday.

Prior to the shooting, the police department had tweeted that citizens should avoid the downtown area after incidents of violence had occurred between the two opposing protests.

This shooting comes on the heels of two protesters being shot dead in Kenosha, Wisconsin days after police shot Jacob Blake seven times in the back last week. The suspect in that shooting, 17-year-old Kyle Rittenhouse, had traveled to Kenosha from Illinois with an assault rifle, allegedly joining other counter-protesters.

Portland has been a sight of civil unrest since late May, in response to the deaths of Floyd and Breonna Taylor. Additional controversy occurred in July when protesters were being arrested by camouflaged federal agents in unmarked vans.