The famed director wrote that he had been planning to work with Boseman again. 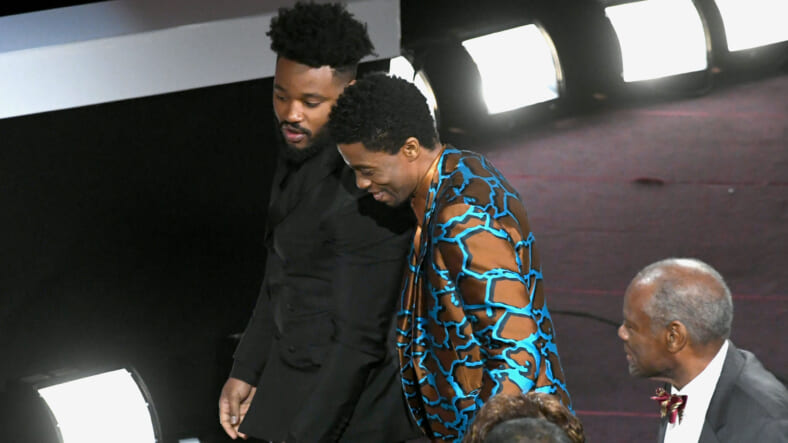 Filmmaker Ryan Coogler met Chadwick Boseman in early 2016 while on a press junket for his film, “Creed.” They had agreed to meet up at the Four Seasons Hotel in Beverly Hills to discuss “Black Panther,” a film that Boseman was set to star in and Coogler had signed on to direct.

There was an instant connection between the two talents and Boseman recalled in a Variety interview, “It felt like we were going to be on the same page.” But neither could have predicted that they would not only make history together with the third highest-grossing superhero film of all time, but also forge a powerful friendship that went beyond Hollywood.

This morning, Coogler released a heartwarming tribute to the late actor. Boseman died on Friday at his home in Los Angeles, surrounded by his family. His family revealed in a statement that he was diagnosed with colon cancer four years ago.

Coogler began the statement by offering his condolences to Boseman’s wife and family.

He shared memories of the first time he viewed Boseman playing T’Challa in an unfinished cut of “Captain America: Civil War.” He hadn’t met Boseman yet, but after witnessing Boseman and fellow actor, John Kani on film, he found himself in awe of Boseman’s capacity as an actor.

Referring to “Black Panther,” Coogler said: “While filming the movie, we would meet at the office or at my rental home in Atlanta, to discuss lines and different ways to add depth to each scene. We talked costumes, military practices. He said to me, ‘Wakandans have to dance during the coronations. If they just stand there with spears, what separates them from Romans?’

Coogler wrote that “Chad valued his privacy” and that he wasn’t privy to the details of his illness. He expressed surprise at learning through the family’s statement that Boseman had been living with his illness for the entire time he’d known him. “Because he was a caretaker, a leader, and a man of faith, dignity and pride, he shielded his collaborators from his suffering.”

The famed director also wrote that he had been planning to work with Boseman again and for the past year had been “preparing, imagining and writing words for him to say, that we weren’t destined to see.”

In “Black Panther,” Coogler directed scenes of Boseman’s character, T’Challa, communicating with the ancestors of Wakanda and he said that the actor’s believable performance made the communication feel real.

“I think it was because from the time that I met him, the ancestors spoke through him. It’s no secret to me now how he was able to skillfully portray some of our most notable ones. I had no doubt that he would live on and continue to bless us with more. But it is with a heavy heart and a sense of deep gratitude to have ever been in his presence, that I have to reckon with the fact that Chad is an ancestor now. And I know that he will watch over us, until we meet again.”