With their Verzuz, Gladys Knight and Patti LaBelle prove legends can still draw, and move, a crowd 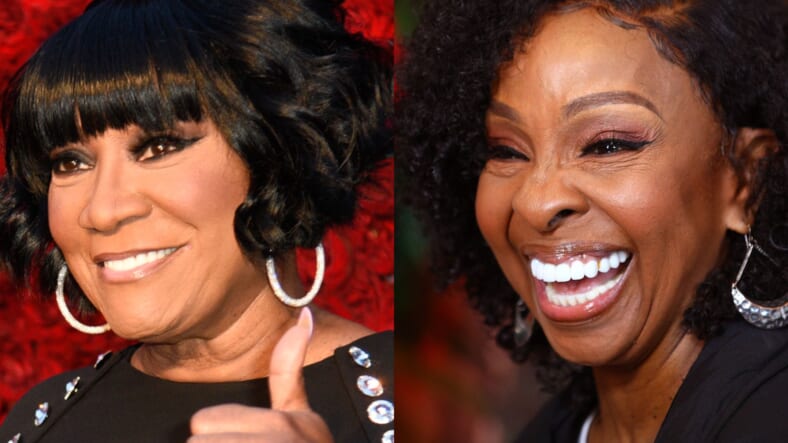 Patti Labelle and Gladys Knight are both winners in their Verzuz. (Photos: Getty Images)
Loading the player...

Patti LaBelle and Gladys Knight shared over 150 years of combined music and memories for a friendly Verzuz competition that ended up being more of a music history lesson than any kind of battle.

Read More: Brandy, Monica take over 30 out of 40 spots on Apple Music chart after Verzuz battle

The presentation took place live from Philadelphia’s Fillmore Theater, as the two sat across from each other in white chairs with a table filled with white flowers in between.

Knight, 77, was dressed in a lavender sequined pantsuit, while LaBelle, 76, was platinum blonde and dressed in a dark blue pantsuit.

The ladies started out talking about when they first met years ago, as well as their cooking, referencing meals cooked on the road as well as years of touring as they talked about coming up in the business together. They chatted about kids and grandbabies, the same way as any grandmoms would talk if they happened to catch up with each other at a family reunion, which what the Verzuz immediately felt like.

“We had so many ups and downs and all arounds but no one kept us down,” LaBelle told Knight as they discussed their blessings even in the age of COVID-19. Labelle encouraged fans to vote and both chuckled saying that they knew who they were going to vote for.

“I’m not trying to get political,” said Knight. “But to make the world great again, you’re saying we’re going to go back to slavery?”

“This is a twin wonderful moment with me and my sister,” LaBelle said referencing that both singers are Geminis. (In fact, they were born four days apart, LaBelle on May 24 and Patti on May 28). “So we’re going to give you some of our songs.”

LaBelle shouted out the LGBT community for their support and the ladies moved on through their shared musical history, singing along to each other’s songs and providing commentary as the celebs and fans chimed in the chat, cheering the living legends along.

The ladies graciously paid homage to their successors including Jennifer Hudson, Ledisi, Brandy, Monica, and Carey, who they said they’ve learned from as well.

Technical snafus that have marred other battles were few this time, except for the Instagram Live inexplicably cutting out before Knight’s rendition of her classic “Midnight Train to Georgia, ” and sound levels getting lower and garbled near the end.

LaBelle showed a few flashes of diva-dom when she asked the unseen technical crew to make sure they put the correct songs up for the women to sing.

“We don’t always remember all our lyrics,” LaBelle said. “Cue up the right songs!”

LaBelle lamented the 7 months that musicians have been unable to tour and said she was grateful that they could come out and do something that was reminiscent of a concert.

LaBelle also hilariously confessed that she has a flip phone, and has had one for over a decade. She also brought a large, embossed golden mirror and fixed her makeup during the Verzuz, then changed into a new pair of Louboutins after kicking off the first pair.

And for the grand finale, Dionne Warwick came out to join the two in a rendition of ‘That’s What Friends Are For.” And then the trio did an inspired version of the Karyn White hit “Superwoman” that they’d recorded a cover of years ago.

As far as who won the ‘battle,’ we could never choose between the two icons. We’ll have to say the winner was good, grown folks’ music and the culture. There’s no female vocalist of the last fifty years that hasn’t been influenced by these two power vocalists and we’re just lucky they are still here to educate and entertain us.

“We are always ready to sing about love and life, for real,” Knight said.